My family comes from different cultural background which has been molded by assimilation, climate of pluralism and acculturation. I am a Filipino and I grew up in Oahu in Hawaii, whereby people in Hawaii have modest-economic status, low income and little education hence less satisfaction to their needs. I never had enormous understanding of cultural diversity and my culture as Filipino as I grew up because I had a combination of native Austronesia civilization which influenced the Hispanics and American cultures (Ciria-Cruz, 1994, p.

Don't use plagiarized sources.
Get Your Custom Essay on Cultural Background Summary Just from $13,9/Page

This affected my cultural background a lot. As argued by Gramann and Sandra, 1998 people of my culture have differences in their language, traditions and mode of dressing which contributes towards cultural diversity. There is difference in moral and religious conceptualization among the people and differences on how each person interacts with the environment within the community (Gramann and Sandra, 1998, p. 57). My cultural identity is characterized by my race mainly skin color and other physical characteristics according to social class and ethnicity.

My cultural backgrounds vary with that of other people due to migration and time of arrival at that particular destination, socio-economic background, and period of settlement, education level, cultural and religious background, rural and urban residence, different life experiences with migration experience (Feagin and Feagin, 1993, p. 42). According to Feagin and Feagin, 1993 my identity has been molded by assimilation, acculturation and climate of pluralism. My cultural identity faces racial discrimination with.

Ciria-Cruz, 1994 argued that, different books have racial composition, culture and demographic information of Filipino people. As argued by Feagin and Feagin, 1993 my cultural identity face substantial prejudice, discrimination and stereotype and people of my cultural background mainly struggle to maintain and preserve their culture and identity. Even speaking their own language result to severe sanction such as, losing their jobs and being made fun of by other communities. This cultural diversity within the communities has a significant challenge to multiculturalism and it threatens the survival of my community.

Regional culture has been shaped by geographical environment and natural conditions. Acculturation has impacted on my cultural background in which people has anticipated on changing their behavior through influence on different aspect such as age, gender occupation recency of arrival, socioeconomic status, and education (Ciria-Cruz, 1994, p. 18). Cultural characteristics suggest the influence of acculturation across generations. Through assimilation people avoid interacting with dominant cultures with the degree in which people maintain and relinquish attributes of their native cultures.

Through assimilation people desires meets with dominant cultures which is not necessary in maintaining an identity of their native culture. Some people don’t like being assimilated but the degrees to which people may agree to be assimilated vary as a result of cultural diversity (Gramann and Sandra, 1998, p. 61). Assimilation has molded my cultural background through economic, social and political integration. This has been possible since my ethnic group changed to that of the host society.

Cultural assimilation has given rise to different economic development patterns reducing cultural diversity by standardizing socio-cultural traits like ethics, beliefs, norms and codes of conducts. The climate of pluralism identifies what people in my culture share in common. This helps in maintaining ethnic identity and cultural identity. Acceptance of pluralism affects people’s feelings of cultural identity with effect of interaction being posited between ethnic and cultural identity. The diverse attitudes towards my cultural background can be viewed as positive forces with compatibility on learning second language.

Language is the key to identification and if I want to change my cultural identity I have to change my linguistic identification. Conclusion My cultural background marks my cultural identity in which various factors have contributed to cultural diversity. Factors like assimilation, pluralism and acculturation. My cultural backgrounds vary because of migration and time of arrival at that particular destination, socio-economic background, and period of settlement, education level, cultural and religious background, rural and urban residence, different life experiences with migration experience. 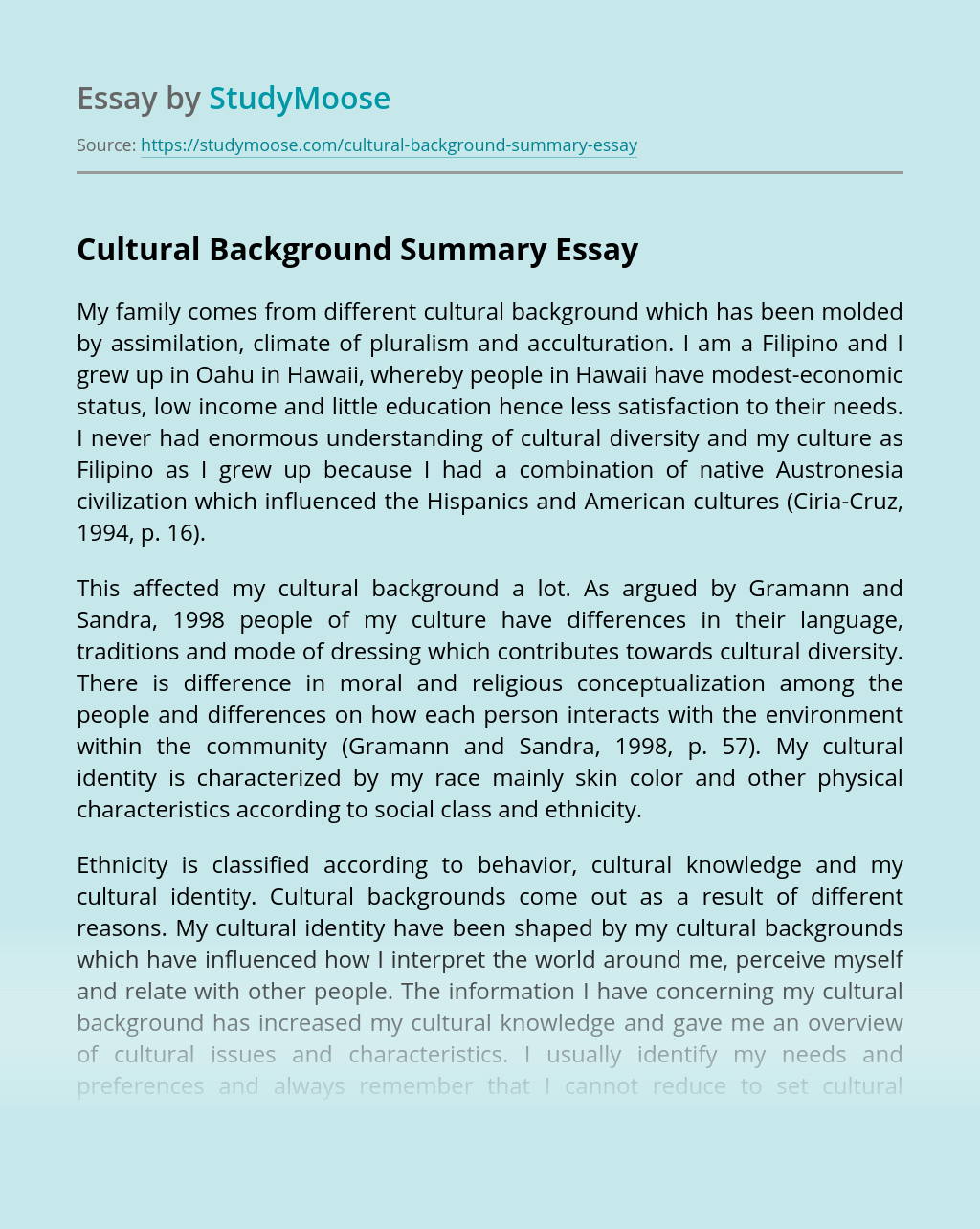