As a culminating exercise on the TKR, you need to write a 5 paragraph essay comparing two characters or discussing two conflicting traits in one character

The Kite Runner by Khaled Hosseini is an inspiring book that is suitable for all readers. Hosseini specified characteristics vividly and I was literally touched to read some sections in the novel. In the novel, Baba and General Taheri shared similar characteristics that they are both very strict and sensitive about one’s reputation, both don’t have healthy body, and lastly, both are well-respected and selfish men at the same time.

Both Baba and General Taheri are extremely strict and sensitive about one’s reputation.

Don't use plagiarized sources. Get your custom essay on
“ As a culminating exercise on the TKR, you need to write a 5 paragraph essay comparing two characters or discussing two conflicting traits in one character ”
Get custom paper
NEW! smart matching with writer

Baba and General Taheri both have a concept that writing or jobs related to education aren’t considered as a ‘real’ job. They both have great expectations on their children. “Grunted something about medical school, law school, and ‘real work’.”(134) Said Baba, when he was asking Amir what kind of job he would want. Baba wanted Amir to grow up and be a doctor, not a creative writer. “Ah, a storyteller,” the general said. “Well, people need stories to divert them at difficult times like this.

”(139) General Taheri said as if writing can only be an interest, not a desire job. On the other hand, General Taheri wishes Soraya could be a lawyer even though he knew Soraya has a great passion in being a teacher. “An intelligent girl like you could become a lawyer, a political scientist.”(181) That made Soraya upset knowing that is not what she wants to do. Both of them are also sensitive about their reputation. They do not want to be humiliated by one another.

“Just don’t embarrass me, that’s all I ask.”(145), Baba said when Amir went to buy coke as an excuse to visit Soraya. As well as General Taheri, he was dishonored by what his wife and daughter did and the Afghans talked about what his daughter did humiliates him. “I didn’t tell you, Soraya said, dabbing at her eyes, “but my father showed up with a gun that night. He told…him…that he had two bullets in the chamber, one for him and one for himself if I didn’t come home. (179) Even though four years already pass and she is so far away from Afghanistan, the memories still won’t fade and she could still hear her neighbors talking that made General Taheri embarrassed. In America, General Taheri never had a job since in America, “…preferring to cash government-issued checks than degrading himself with work unsuitable for a man of his stature-he saw the flea market only as a hobby, a way to socialize with his fellow Afghans.”(176) Showing that he is sensitive of the job he used to have in Afghanistan, since the position is way higher in his notion and he don’t want to embarrass him by working in the market. Although his daughter and wife are helping out in the market, he is just there to socialize. These examples show that Baba and General Taheri are both strict and sensitive of what other think of themselves.

Throughout the novel, both Baba and General Taheri don’t have healthy body and slightly refuses to see the doctor. Baba discovered that he had cancer when they moved to America, yet he refused to see doctors that are Russians, such as Dr. Schneider. Baba had a strong nationality of personal traits of people he had seen or dealt with back in Afghanistan since the Soviets’ dominant were one of the reasons why they moved to America. “The visit with pulmonologist, Dr. Schneider was going well until Baba asked him where he was from. Dr. Schneider said Russia. Baba lost it.”(155) It shows that he was loyal to his nationality and still showed hatred toward the Russians that seized his country even when he is in America. Even though Baba changed several doctors, he still refused to Amir that he is not going to take any chemo medication or any operations. “Don’t you challenge me in public, Amir. Ever. Who do you think you are?”(156) That is the very last time Amir asked Baba to go see a doctor until Baba gets very sick at the flea market again. General Taheri doesn’t have a healthy body either. He suffered from blinding migraines that lasted almost a week and headaches that caused him to locked himself in the door with the lights off until the pain go away. “No one was allowed to go in, no one was allowed to knock.”(176) These quotes show that both Baba and General Taheri don’t have healthy body.

In The Kite Runner, Baba and General Taheri also share a common characteristics that they are both well-respected traditional men and selfish at the same time. By in Afghanistan, Baba used to stand up for justice. “Do you have to always be the hero? I thought, my heart fluttering. Can’t you just let it for for once? But I knew he couldn’t – it wasn’t in his nature.”(115) Amir’s thought when Baba stands up for a woman on their way leaving Kabul. “…Before the young woman’s husband suddenly stood and did something I’d seen many others do before him: He kissed Baba’s hand.”(117) Shows that he was well respected by people back in Afghanistan. Also, “He was a decorated general in Kabul. He worked for the Ministry of Defense.”(138) When Baba introduced Amir to General Taheri. Both Baba and General Taheri were well respected back then, but in America, it’s a new society and people aren’t unfamiliar with both of them. Both of them are also selfish. General Taheri ignored his wife many times and fought over small things, although usually ended up with General Taheri’s choices. “I’ll make you something else, “Khamum Taheri would say, but he’d ignore her, sulk and eat bread and onion.

This made Soraya angry and her mother cry.”(176) When both his daughter and wife tried taking care of him when he’s going through the pain of his headache. He was selfish and should show appreciation of what they had given him. General Taheri also doesn’t allow Khala Jamila to sing in public when they were married. “Soraya told me that her mother had wanted to sing at our wedding, only one song, but the general gave her one of his looks and the matter was buried.”(177) His wife loved to sing, but his selfishness disappoints both his wife and daughter, yet he didn’t care. Baba was also selfish; in fact, he was the Amir love and hate at the same time. “Please think, Amir jan. It was a shameful situation. People would talk. All that a man had back then, all that he was, was his honor, his name, and if people talked…we couldn’t tell anyone, surely you can see that.”(233) Amir was furious when Rahim Khan told him the truth Baba had hide from him years ago. This shows that both Baba and General Taheri are well-respected by people and selfish at the same time.

The Kite Runner detailed the characteristics of each person mentioned throughout the novel. Hosseini wrote the novel specifically that readers could compare characters to other characters. In the novel, Baba and General Taheri shared a lot of similar characteristics that they are both strict and sensitive of one’s reputation, both don’t have healthy body and gets stubborn, and most importantly, both are well-respected and selfish men at the very same time. Even though we cannot directly claim they are same type of person, but they both slightly shows similarities from the examples.

As a culminating exercise on the TKR, you need to write a 5 paragraph essay comparing two characters or discussing two conflicting traits in one character. (2020, Jun 01). Retrieved from https://studymoose.com/culminating-exercise-tkr-need-write-5-paragraph-essay-comparing-two-characters-discussing-two-conflicting-traits-one-character-new-essay 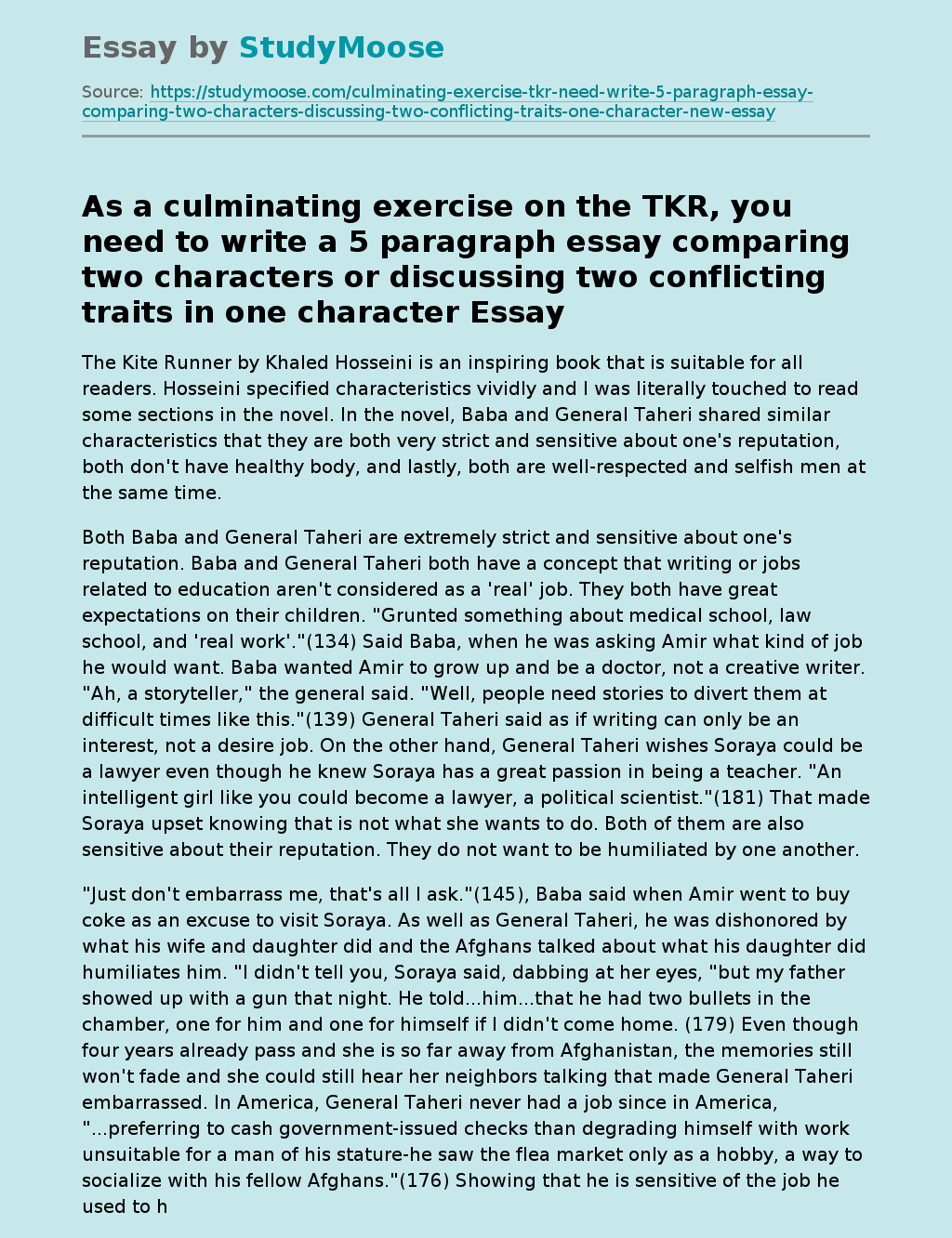