Two main themes in the novel The Kite Runner are that of social class and gender roles. Everywhere that Amir, the main protagonist, turns, society is divided. From his earliest childhood memories to living in America, there always seems to be some sort of invisible line drawn between his people. There is separation between the Pashtuns and the Hazaras, between Americans and Afghans, between men and women, and between the Talibs and the people of Afghanistan. “’Afghanistan is the land of Pashtuns.

Turn in your highest-quality paper
Get a qualified writer to help you with
“ The Kite Runner Analysis: Divisions of Afghan Society ”
Get high-quality paper
NEW! AI matching with writer

It always has been, always will be. We are the true Afghans, the pure Afghans, not this Flat-Nose here. His people pollute our homeland, our wantan.

They dirty our blood…. Afghanistan for Pashtuns, I say. That’s my vision. ’” This quote reflects the hatred some people had for the Hazaras, or “Flat-Noses,” in Afghanistan. The Hazaras were the lower class, while the Pashtuns were the wealthy class. If there was a Hazara in Kabul, the bet was that he was “a beggar or a servant or both.

” This severe social divide was not just economical. Only the Pashtuns were able to attend public school, and barely any, if any, Hazaras were literate. However, Amir grew up with Hassan, his Hazara servant, and didn’t know the hatred the rest of the Pashtuns harbored for the Hazaras.

“Hassan and I fed from the same breasts. We took our first steps on the same lawn in the same yard. And, under the same roof, we spoke our first words. ” After Amir Joel Huff-2 returned from school, he and Hassan would go up to “a bowl shaped hill just north of [his father’s] property” that had a cemetery atop it, with a luscious pomegranate tree just outside the fence.

They climbed the tree’s large branches, and carved into it the words “Amir and Hassan, the sultans of Kabul. ” After they ate the fruit and wiped their hands on the grass, Amir would read to Hassan.

Despite the social divide, Amir and Hassan were like brothers. This shows that the unfair division of people can be broken – people don’t have to follow trends – that change can arise and equality can grow. The opinion on gender division, however, is slightly different in Hosseini’s book. There are two types of gender division in this book: the traditional, formal wait-until-marriage-to-be-alone kind, and the kind that made life harder on women. Hosseini somewhat supported the former, because that was the way of his people, and looked down upon the latter.

In the novel, Amir sees a girl by the name of Soraya Taheri at the flea market where he and his father have a stall. This girl amazes him, as he has not actually seen a real girl of his age almost all his life, due to the separation of sexes in his homeland. He describes her as his “Swap Meet Princess,” but never actually talks to her for months. When he finally grew the nerve to talk to her, he asked where her father was, but eventually asked what she was reading. “I held my breath. Suddenly, I felt the collective eyes of the flea market Afghans shift to us. I imagined a hush falling.

Lips stopping in midsentance. Heads turning. Eyes narrowing with keen interest. Up to this point, our encounter could have been interpreted as a respectful inquiry. But I’d asked her a question and if she Joel Huff-3 answered, we’d be…. Well, we’d be chatting. Me a mojarad, a single young man, and she an unwed woman. ” This would be gossip material to the entire Afghan community in Los Angeles, just as it would have been back in Kabul. Rumors were deadly to anyone’s reputation in that community, and reputation was one of the only things that actually mattered.

What made it worse was that Soraya had a “history. ” Rumors, as everyone knows, are sometimes true. Unfortunately for Soraya, her “history” was entirely true. “When we lived in Virginia, I ran away with an Afghan man. I was eighteen at the time…rebellious…stupid, and… he was into drugs…. We lived together for almost a month. All the Afghans in Virginia were talking about it. ” This gossip traveled everywhere, as everyone in Afghanistan knew everyone else in Afghanistan. Soraya, daughter of the war hero, General Taheri, was hit especially hard by this gossip, and it traveled with them to Los Angeles.

Though she tells Amir about the horrible past she has, Amir still pursues marriage with her, loving her all the same. “How could I, of all people, chastise someone for their past? ” This shows a common double standard in the Afghan culture that also exists in our culture, to an extent. “Their sons go out to nightclubs looking for meat and get their girlfriends pregnant, they have kids out of wedlock and no one says a goddamn thing. Oh, they’re just men having fun! I make one mistake and suddenly everyone is talking nang and namoos and I have to have my face rubbed in it for the rest of my life.

” To add to the extremity that Afghans see this sin as, after he made Soraya come home, Soraya’s father sat her in a chair, handed her a pair of scissors, and Joel Huff-4 calmly told her to cut off all her hair. He watched while she did it, his pride hurt more than hers. Along with the distinct division of men and women even in America, there was also a class division between Americans and Afghans. While the Americans had all white-collar jobs, Afghans were given the blue-collar jobs, despite some of them being professionals back in their homeland.

Amir’s father, once a rich and powerful businessman, was forced to take up odd jobs and transactions to get by. He “sold his Buick and bought a dilapidated ’71 Volkswagen bus for $550 from an old Afghan acquaintance who’d been a high school science teacher in Kabul. ” He bought this bus to go around to garage sales, buy items, take them to the flea market, and sell them for a small profit. “By that summer, Afghan families were working an entire section of the flea market. ” “All of them high ranking officials, lawyers, businessmen, professors, doctors, now reduced to haggling over 2 dollars.

” This shows the distinct difference between foreigners and natural born citizens in America. Racial prejudice and fear separate classes, even in a free society such as ours. The worst of any social divide mentioned in this book, however, was that between the Taliban and the citizens of Afghanistan. The Taliban, or just Talibs, took over Kabul after Amir and his father moved to America. When they were there, they destroyed everything, imposed strict laws, and committed random acts of violence. The citizens hated them, even though they “were all cheering when the Taliban came to take power” from the previous king.

“I feel like a tourist in my own Joel Huff-5 country,” said Amir as he was entering the area around Kabul. As he was searching for his half-brother’s child, Amir attended a soccer match to find a “tall Talib with black sunglasses. ” At halftime, three trucks rolled out into the field, one with a woman, one with a blindfolded man, and one carrying a load of stones. They unloaded each truck, placing the woman and man in separate chest-deep holes at the ends of the goal posts. “A chubby, white-bearded cleric dressed in gray garments stood near the goalposts and cleared his throat into a handheld microphone.

Behind him the woman in the hole was still screaming. He recited a lengthy prayer from the Koran, his nasaly voice undulating through the sudden hush of the stadium’s crowd. I remembered something [my father] had said to me long ago: Piss on the beads of all those self-righteous monkeys. They do nothing but thumb their rosaries and recite a book written in a tongue they don’t even understand. God help us all if Afghanistan ever falls into their hands. “ And sure enough, it had. The reign of terror of the Taliban swept through the streets of Kabul, as it had so many other Afghan towns.

This was proven by the ruthless execution of the man and woman in the soccer stadium. The tall Talib in the black sunglasses picked up an unloaded stone, and hurled it at the man’s face, striking him in the side of the head. He continued to throw stones at the two until they were but bloodied corpses, at which point they were loaded back up into the trucks and hauled away. As Hosseini exposes the divisions in Afghan society, we in American society should reflect on the cultural fallacies that made Afghanistan the war-ravaged state that it is today. 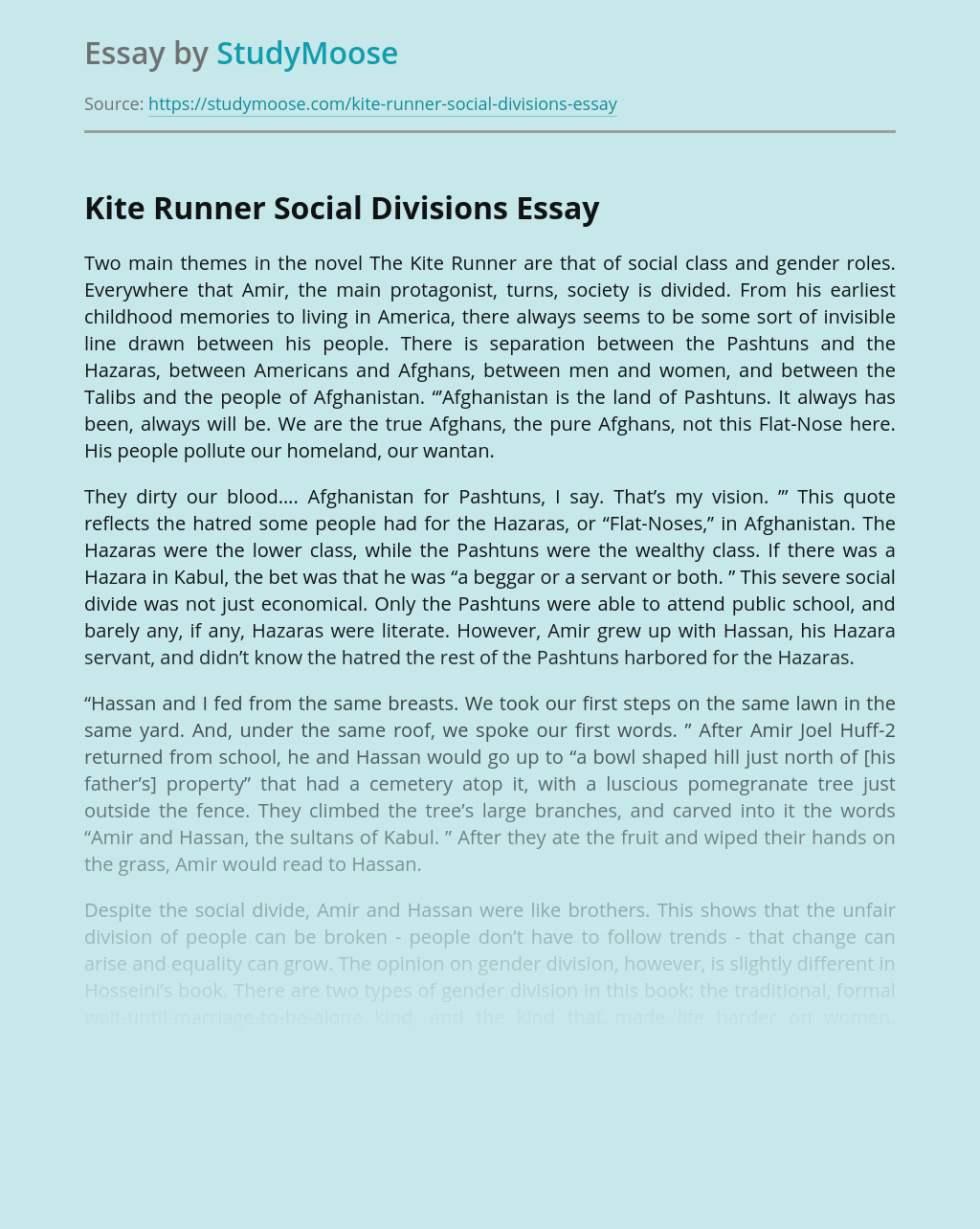 Turn in your highest-quality paper
Get a qualified writer to help you with
“ The Kite Runner Analysis: Divisions of Afghan Society ”
Get high-quality paper
Helping students since 2015
Stay Safe, Stay Original