Racism plays important roles in Khaled Hosseini’s The Kite Runner. The author uses racism to describe the characters and the culture represented in the stories. In The Kite Runner, Khaled Hosseini uses prejudice as a tool to tell this story of betrayal and redemption. He pursues his story with prejudice and racism in Afghanistan as well as in the United States. While the author uses individual characters to tell the story, he portrays the general attitudes and history associated with the characters’ Hazara and Pashtun ethnic origins and the conflicts that arise in Afghanistan.

Turn in your highest-quality paper
Get a qualified writer to help you with
“ Kite Runner Racism ”
Get high-quality paper
NEW! AI matching with writer

Throughout history and even while the story was taking place in the 70’s the US of A was going through their tough times with racism and prejudice thoughts and acts towards other ethnical groups such as the blacks, Asians and Latino’s. Although during this present era these racist acts and thoughts have been cut down and have been limited to just some states in the south as where in Afghanistan these prejudice acts still exist.

Ali and Hassan represent the marginalized group in this story. They are considered by the ruling class to be of lesser value due to their ethnic origin, religious beliefs, appearance and social standing.

The author gives us a glance of this when Amir reads about the harassment of, and attempted uprising of the Hazara, and how Amir’s people, the Pashtuns had: “…quelled them with unspeakable violence”. The disregard that people have for the Hazara is reinforced when Amir asks his teacher about what he has read and he responds by saying, “That’s one thing Shi’a people do well, passing themselves as martyrs”.

Assef shows how internalized this hostility is when he says to Amir and Hassan, “Afghanistan is the land of the Pashtuns. It always has been, always will be. We are the true Afghans, the pure Afghans, not this Flat-Nose here”. 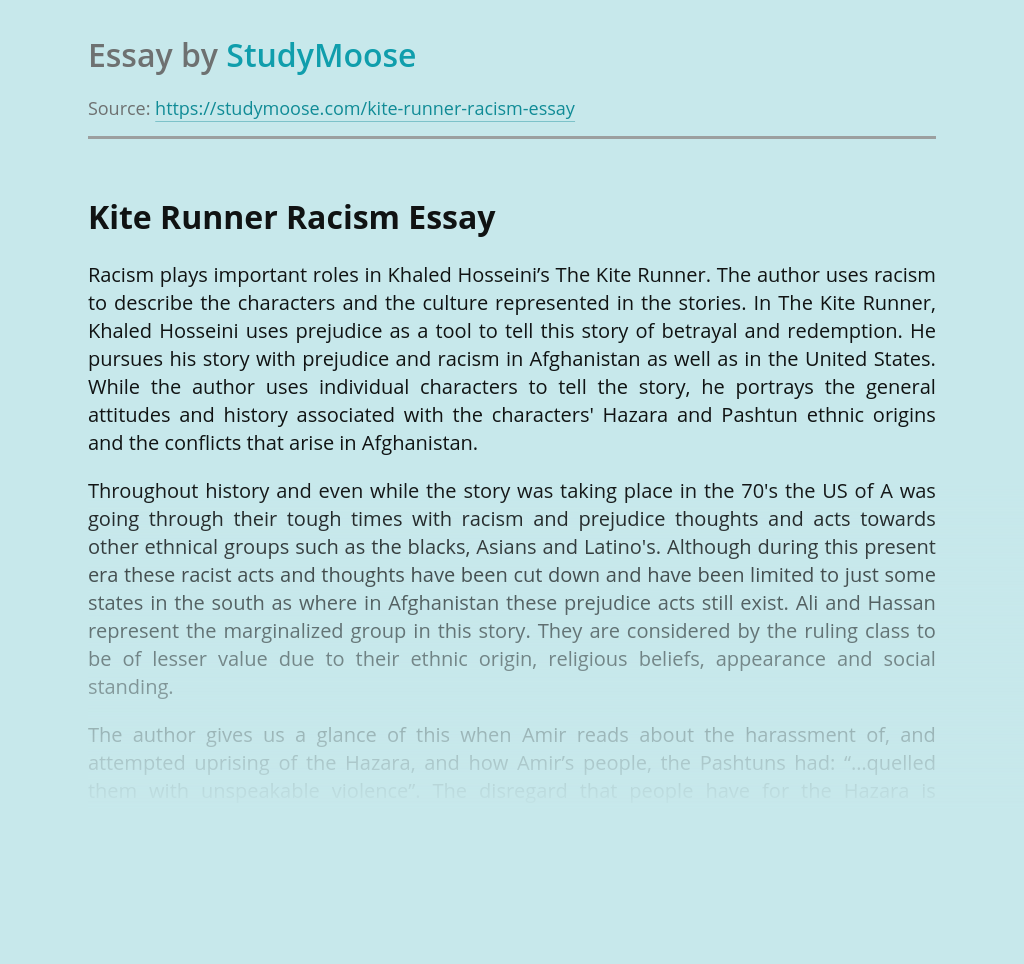 Turn in your highest-quality paper
Get a qualified writer to help you with
“ Kite Runner Racism ”
Get high-quality paper
Helping students since 2015
Stay Safe, Stay Original