So far, the play has hurdled through seven scenes of mounting tension and now tithers on the threshold of regicide. At this point, Shakespeare freezes the action. In the tension of silence, both character and play develop on new levels.

For Macbeth, this soliloquy, in A.C. Bradley’s words: “is where the powerful workings of his imagination rises to a new level of visible intensity as his conscience manifests itself as an air-drawn dagger.” This is the first glimpse of a vigorous imagination from which stems the guilt-inspired hallucinations that will torment him.

Don't use plagiarized sources. Get your custom essay on
“ Crucial Scene in Macbeth: The Dagger Soliloquy ”
Get custom paper
NEW! smart matching with writer

Bradley concludes that “his imagination is a substitute for conscience”, but this isn’t all. This soliloquy expresses macbeth’s most profound fears and hopes, and the dagger symbolises the fulfilment of his black desires.

It conveys his internal struggle to divest himself of fear and scruples to become wholly committed to murder. His attempt to grab the dagger indicates his desperation to accomplish the deed before any regrets.

Yet the past tense in “the way I was going” suggests that realisation of his desires has blunted blind courage.

Macbeth’s difficulty in overcoming his conscience demonstrates that murder goes against his person, and he has to fight his own nature to carry it out. This soliloquy halts the action for us to absorb this crucial element in his characterisation.

His struggle also alerts us to his suffering and heroism. The “heat-oppressed brain” and his confusion as his eyes and touch contradict each other emphasises his tortured, conflicting mind.

Macbeth seeks the reassurance of reality, drawing his own dagger in fear and frustration of confusion. He ultimately rejects the illusion, attributing it to the ‘bloody business’. S.T. Coleridge suggests that macbeth “mistranslates the recoiling of conscience into selfish reasonings due to his cowardice.” From then on, there’s a grim acceptance of the deed and Macbeth bids the earth to “hear not his steps”. According to Samuel Johnson, “that Macbeth wishes to escape the eye of providence is the utmost extravagance of determined wickedness”, yet Bradley interprets Macbeth’s aligning himself with evil as “frightfully courageous”. From such varied analysis emerge a humanly complex man driven by his internal turmoil to the point where survival requires that courage straddle fear.

On the play’s level, this scene guarantees Duncan’s death. The dagger is a symbol of Macbeth’s resolution, turning its handle toward his hand, spurring him to ‘clutch’ it. The personification of ‘withered Murder” gives the deed a concrete tangibility. And Macbeth’s final words “whiles I threat, he lives” show his cold determination. In confirming Ducan’s death, it marks a turning point in the play, as Macbeth fulfils the witches’ prophecy.

Another turning point is in Macbeth. He lets the dagger marshal him toward the deed, pursuing the illusory rewards offered by evil. In David Elloway’s words: “He’s entered a world of deceptive dreams and moves through it with the mindlessness of a sleepwalker.” Macbeth expresses his fear of the ‘sure and firm-set earth’, which is a symbol of reality. This shows his tendency to take meaning at face-value, justifying his blind confidence in the witches later.

The soliloquy’s dark imagery enforces the magnitude of Macbeth’s crime, and foreshadows its consequences. Blood appears both on the blade and handle of the dagger, insinuating that he cannot emerge cleanly from the deed. Associates of night and evil are evoked to set the scene for murder. The apparent death of nature during night connotes the unnaturalness of the deed. Coleridge believes that “the dimensions of murder are expressed in the portrayal of its movement.” Murder moves in three ways: stealthily, as that of a trained assassin. Then, with Tarquin’s ravish, equating it with rape. And, like that of a ghost’s, a mindless wraith “alarumed” to fulfil his sole purpose. By portraying the diverse facets of murder, Shakespeare demonstrates its profound unnaturalness, and the magnitude of its consequences.

Also, this crucial scene reinforces the themes and motifs of the play, extending upon their importance.

Primarily, it illuminates the conflict between appearance and reality. Despite the apparent solidity of the dagger, Macbeth cannot grasp it. This dramatises the deceptive nature of appearance. The latent meanings of many lines epitomise the idea that the full truth is hidden by face value. The phrase: “dagger of the mind” doesn’t merely mean an imaginary weapon, but also the bane of the mind – a rancour in his peace. Only both meanings together can convey Macbeth’s turmoil and the depth of his thoughts.

The image of blood in ‘gouts’, the darkness of night, and the non-restriction of action to merely human agencies are potent elements of this soliloquy. These are what create the ominous ambience of the play. According to Bradley, “macbeth gives the impression of a black night broken by flashes of light and colour.” Here, the glimmering dagger and the potent colour of blood create this effect. Such vivid and violent imagery are what characterises Macbeth.

Shakespeare’s pre-eminence as a dramatist is due to his capacity to create vivid images that embody powerful human emotions. This soliloquy brims with such imagery and symbolism, and is imperative in promoting Macbeth, the simplest of Shakespearean tragedies, to be the most broad and massive in effect. 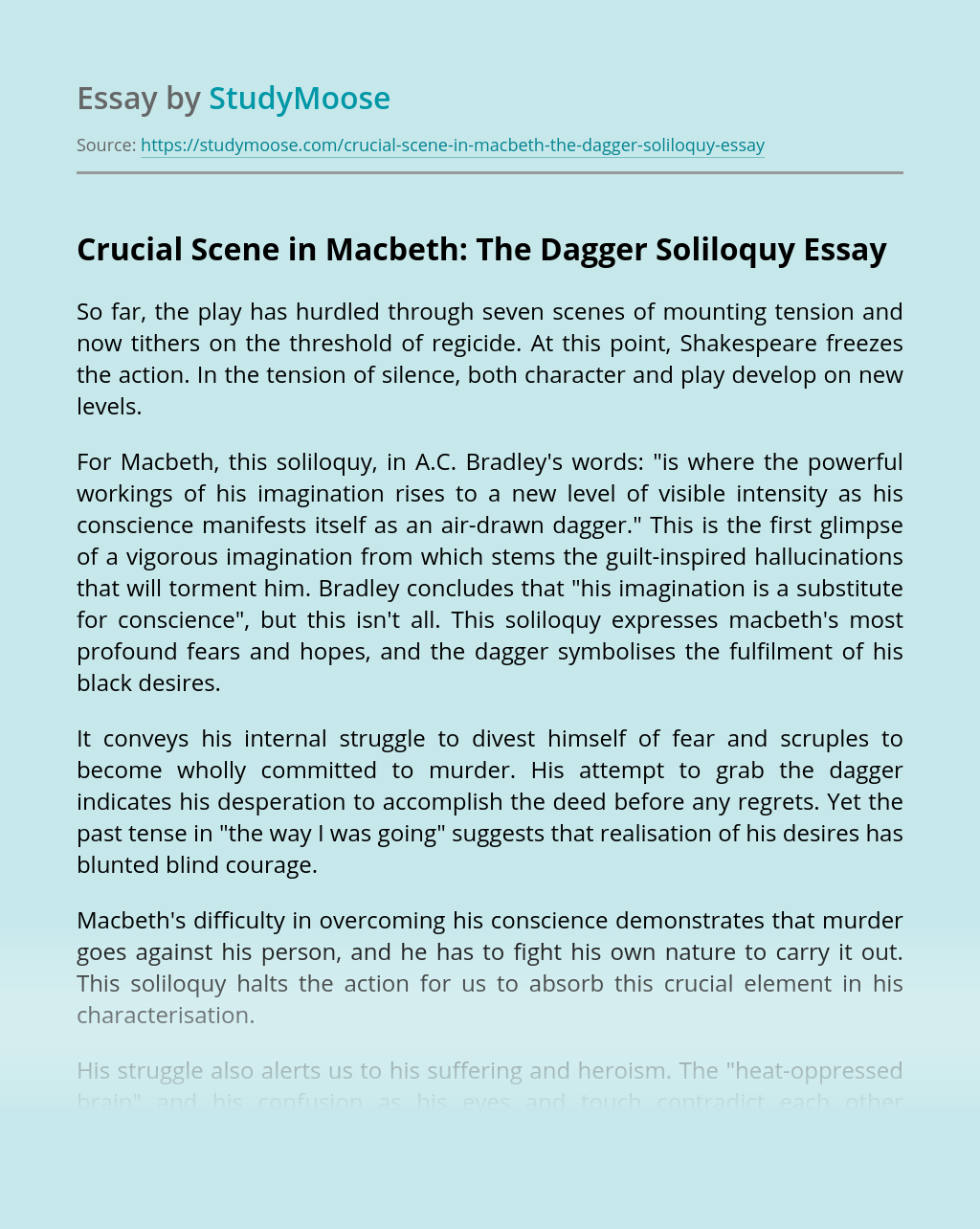