The most important line in the Shakespearean canon, “To be or not to be [â€¦]” (Shakespeare.3.1.64), is most quintessential for the young Price Hamlet. In the metaphysical level, life and death are the questions which Hamlet is forced to consciously reason through; however, the general terms with which the soliloquy is phrased with gives it a resonance that extends past Hamlet. The Prince’s meditations transcend the personal, thereby capturing the essence of human misery and contemplation as a whole.

There are two ways to interpret this soliloquy: Romanticism and melancholy.

The Romantics, who see Hamlet as the dreamer, find support when the Prince says:

And thus the native hue of resolution

Is sicklied o’er with the pale cast of thought,

And the enterprises of great pith and moment

With this regard their currents turn awry,

And lose the name of action.

Hamlet should be considered the victim of passion. He is manipulated by his emotions to do certain acts.

The above quotation focuses on colors and tones that relate to the emotional theme. For example, hue and pale convey a sense of vivacity to the emotion. Now, the soliloquy can be thought of as a violent oscillation of mood typical in the melancholic individual.

At the risk of ‘over-laboring’ the point, to be is not opposed by suicide, death or non-existence, but rather, its blatant opposite. Shakespeare simplifies the issue to its most abstract form, until it almost doesn’t make sense. Further, the lack of “me” or “I” in Hamlet’s personal soliloquy merely emphasizes the fact that he is not trying to express himself; rather, he poses the question as a matter of philosophical debate.

Shakespeare avoids imagery, any particular reference that could narrow the question’s application, which is surely one reason why the phrase has resounded throughout world literature. Having made this deliberately stark declaration stripped of imagery or ornament, Shakespeare has Hamlet produce a sudden influx of imagery to change the subtle introduction.

For who would bear the whips and scorns of time, Th’ oppressor’s wrong, the proud man’s contumely, The pangs of despised love, the law’s delay,

The insolence of office, and the spurns

The contrast with the bare elegance of the first line is striking, but this is not simply Shakespeare being careless in his diction. The iambic pentameter change between the first two sentences and the above is quite drastic. It could represent the growing madness and insanity Hamlet accumulates as this soliloquy progresses. The imagery shows Hamlet attempting to wrestle with the eternal question he has raised, and their number demonstrates that he cannot easily get a grip on the problem-he cannot find an analogy with which to work through to a solution that has the clarity and purity of the question itself.

The slings and arrows of fortune, the arms to be employed against a sea of troubles, the sleep of death, whips and scorns of time, the undiscovered country of the afterlife. The entire speech has been referred to as the “central soliloquy”. It poses many of the critical problems; it would be naÃ¯ve to simplify the soliloquy to just death/life. These images generalize the miseries of humans. Yet, some of these images juxtapose each other: how exactly is one meant to take up arms (to employ weapons) against a sea of troubles? Hamlet ponders whether he should take action against his sea of troubles and seek revenge for his father’s death or live with the pain of his father’s murder.

Taking arms against a sea of trouble,/And by opposing end them involves positive action. Shakespeare, here, may have had in mind to proclaim the cloistered virtue as one of cowardice: it follows that Hamlet now faces a moral dilemma. The young Prince next considers a possible solution to his problem-suicide.

To die, to sleep-

The heartache and the thousand natural shocks

That flesh is heir to-’tis a consummation

Devoutly to be wished.

If he were to sleep, Hamlet would feel alleviated of all concerns; however, he says that if he were to sleep, he might have disturbing dreams while in slumber, which would be undesirable. This is another conflicting view, an overarching metaphor of To be or not to be. The reason for his fear of death is made more lucid in three memorable lines: “But that the dread of something after death,/ The undiscover’d country from whose bourn/No traveller returns, puzzles the will [â€¦]” (3.3.78-80). It could be quite possible, applying this reasoning, that Hamlet rejects the ghost of King Hamlet to be a demonic-spirit, sent to damn him.

This soliloquy is, in essence, the deliberation on the conflict between reason and passion. Hamlet has been institutionalized enough to pragmatically think through the act of suicide. But, since he is “toyed” by his heavy emotions, he is the victim of passion. His religious thoughts cause him to reconsider his opinions of the ghost, which drives him to a sense of insanity once the truth was revealed. Even though the soliloquy was specific to Hamlet’s emotional turmoil, the introduction of the broad opening question exposed many implications on “modern” society; such a stark difference between existence and non-existence can reveal one’s true nature and mental function. 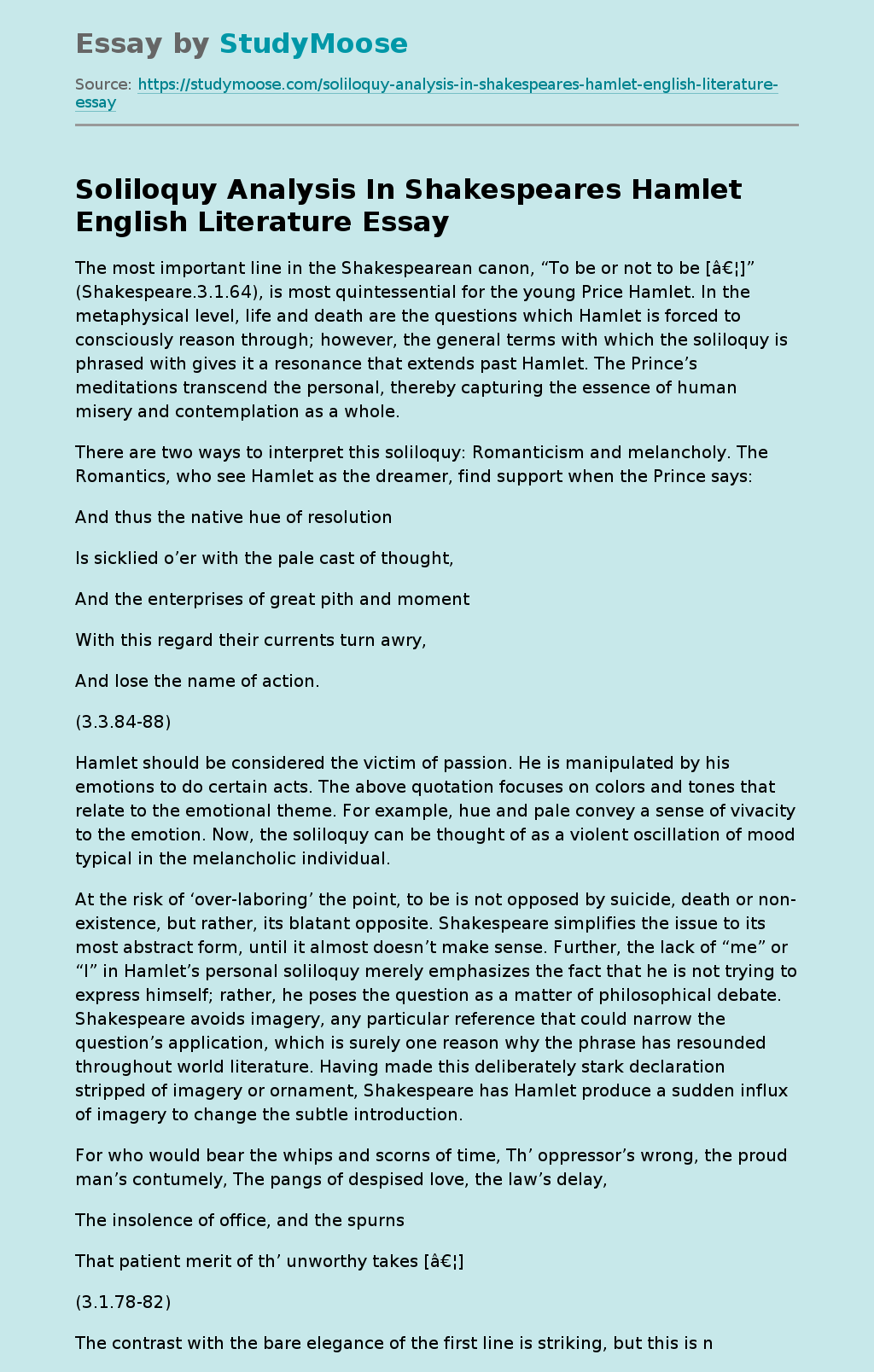