Analysis of Song of Solomon Novel

‘Song of Solomon’, Toni Morrison’s third Novel was published in 1977 and it ascertained her as a key American author given that, after its publication, it turned out to be a bestseller and drew honor from critics as well as readers. The narrative has been particularly admired for the exquisiteness of its language as well as its foundation of international themes in the distinctiveness of the experience of the African-American, not to forget its utilization of folklore. (Morrison 34) The narrative is based on an African-American fairy tale concerning slaves who are able to fly back to Africa once they decide.

Don't use plagiarized sources. Get your custom essay on
“ Analysis of Song of Solomon Novel ”
Get custom paper
NEW! smart matching with writer

The author fictionalizes this fairy tale through the traits of Solomon who is the great-grandfather of the story’s central character, Milkman Dead. Through Milkman’s discovery of Solomon’s story and his capability to fly, he learns to be proud of his ancestry as well as valuing his connections to community and family unit. The book won the National Book critics Circle Award for fiction in the year 1977 and is currently extensively taught and emerged once more on best-seller lists after Oprah Winfrey chose it so that it could be included in her book club.

The book has being loved by readers for a period of more than two decades and it is still deemed one of Toni Morrison’s most excellent books. What touched me most after reading Toni Morrison’s book are the biblical references: (Morrison 51& 52) The author keeps making biblical references from both the Old Testament as well as the New Testament which are quite useful in bringing out the overall themes, characters as well as in building up the plot of the novel.

To start with, the author gives her book the title ‘Song of Solomon’ which is a reference taken from the Old Testament’s ‘Song of Solomon’ or rather Song of Songs, or Canticles which is basically on love and relationships and is interpreted in some customs as a figurative demonstration of the relationship of Israel and God as wife and husband where the principal characters of the song are a man and a woman and the rhyme offers progress commencing courtship to consummation.

In Morrison’s narrative, Solomon, Milkman dead’s great-grandfather finds out the tale of Solomon and his capability to fly which makes him to be delighted of his heritage and to value links to family and community. (Furman & Morrison 142) Song of Solomon commences with Robert Smith’s flight from the roof of Mercy hospital. Smith emerges on the top of the hospital with two handcrafted arms on his backside and jumps from the top of the hospital to the shock and amazement of many.

Because of him making an attempt to fly, Ruth Foster dead is able to give birth inside the hospice instead of on its stepladder given that during this moment in time, Negro women are not permitted to deliver in the hospital because of segregation which makes Macon Dead turn out to be the first Negro infant to be delivered in Mercy Hospital. (Furman & Morrison 198) Morrison makes biblical inferences in naming his characters which helps in bringing out their personalities. Corinthian’s Dead, Milkman and Lena’s father is called Macon Dead and is the proprietor of apartments and houses.

Dead thinks owning property enables one to own oneself, as well as others too. Together with Pilate, Macon grew up in Lincoln’s Heaven, a farm in Pennsylvania. At the age of sixteen, he watches his father murdered by whites who desire the family’s land. Macon and Pilate are sheltered by Circle, a maid and midwife who houses them in vacant quarters of the Butler house. They then escape from the Butler place and hide in a cave for the night where they meet a white man whom Macon kills. (Furman & Morrison 231)

Macon “Milkman” dead III’s mother breastfeeds him for far too long until he is so tall and his feet are “touching the floor” which makes him swiftly gain the reputation for being a “mummy’s boy” which is a direct contrast to Guitar, his best friend. Milkman has two sisters, “Magdalene named Lena” and “First Corinthians”. The daughters of the family unit are given names by placing a pin inside the bible while the males are called after their father. Macon Dead’s name was the outcome of an administrative fault when Milkman’s grandfather had to list following the end of slavery. (Morrison 121)

Pilate, Macon Dead Jr. ’s sister, is identified as fostering an Earth Mother type of personality. Given that he was born lacking a navel, she is rather a mystic character and it is mightily implied that she is Divine i. e. she is a female Christ and that her name is ironical. Macon has not had a word to his sister for years and did not feel greatly of her. She, just like Macon, has had to fend for herself starting from an early age, although she has to deal with her history in a different manner.

Reba is her one and only daughter. She also has one granddaughter by the name Hagar who is very much in love with Milkman, and is not able to deal with rejection. Milkman’s erstwhile best friend, Guitar, attempts to murder him after he mistakenly believes Milkman of deceiving him out of concealed gold. Toni Morrison’s narrative comes to an end on a touching and uncertain note after Milkman finally discovers to fly after deciding to confront Guitar. (Furman & Morrison 265)

For instance, Ruth, Dead, First Corinthians, Pilate, Heaven, Guitar, Magdalene named Lena, Lincoln’s Heaven, maid, bible, divine, Christ, mid wife among others. In addition, the author makes use of other biblical references like ‘Mercy’ i. e. Mercy hospital, the ability to fly by bearing wings like the Angels key references.

Analysis of Song of Solomon Novel. (2016, Aug 28). Retrieved from http://studymoose.com/critical-analysis-of-song-of-solomon-essay 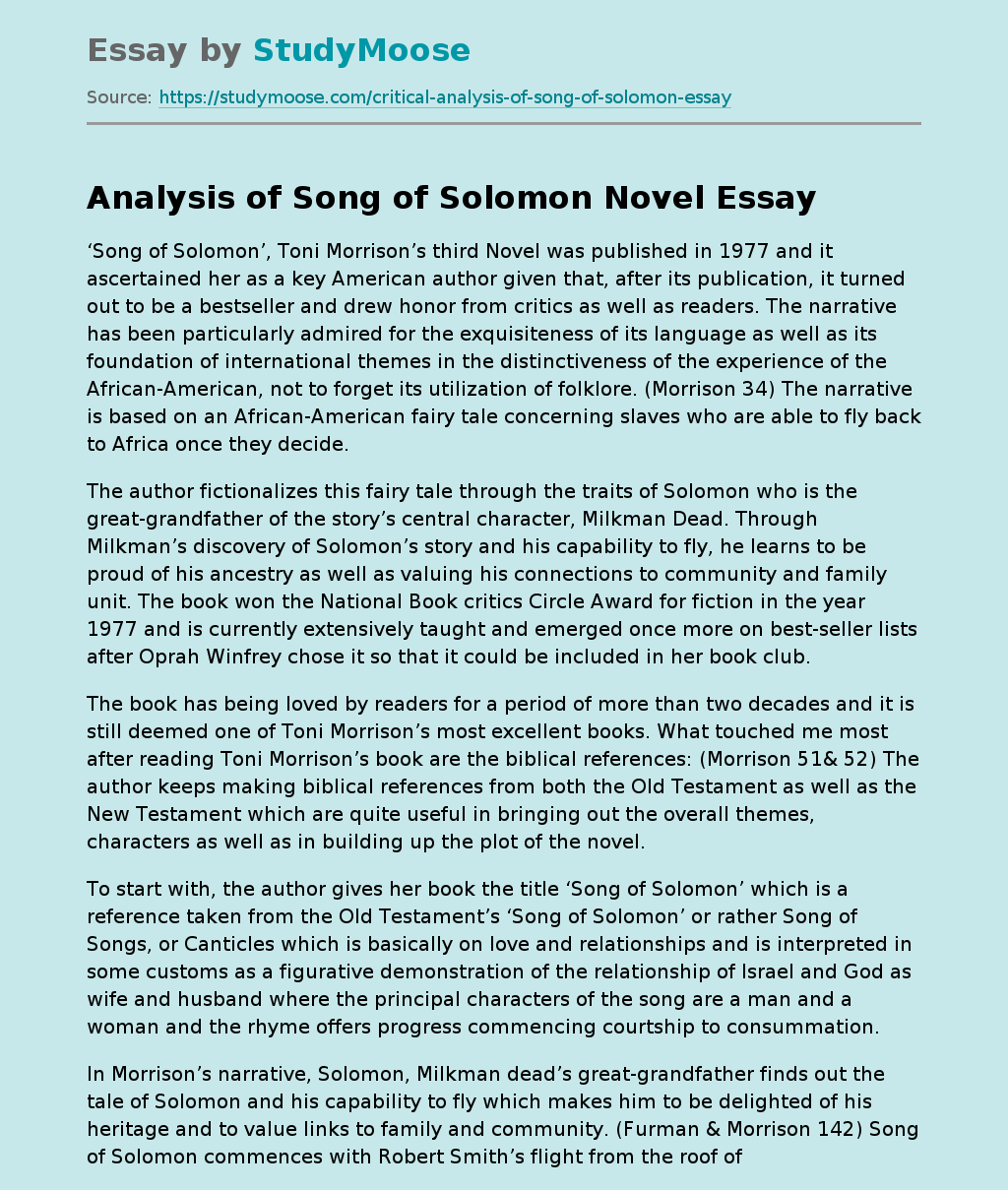