Crimson Tide film exhibits a theme of leadership case, is based on nuclear ballistic submarine order aimed to hit against Russia. The attack is aimed to silence threat of launching nuclear missiles which Russia is in possession. The combative action is in a problem since the army structure is loose due to dispute between executive officer and the captain over the course of action to be taken by the crew. This results to splitting of the crew in this mission hence formation of two confrontational factions for same combative mission.

Turn in your highest-quality paper
Get a qualified writer to help you with
“ Crimson Tide film ”
Get high-quality paper
NEW! AI matching with writer

The warship is in problem as the rival group tries to take control of command. The situation turns desperate and speedy resolution in to this problem is requiring since the time is running up to launching moment. Success in this situation largely depends on the decision made since it has to be resolved in case of winning or face the disastrous consequences due to wrong decision (Kempley 1995). Crimson tide film exhibit the strength as well as weak point of the responsible leader in this film i.

e. the captain and Executive officer.

Different strategies and advices by the two leaders geared toward course of action to be taken results to potential conflict. In this situation leadership is required to guide the crew who are expected to follow the directives. But the situation changes due to the internal conflict affecting the crew to lose track of the event at hand since leaders hold diverse understanding of the mission as well as the organization.

This film shows element of racial undertone in the leadership theme since captain and Executive Office are white and black respectively.

On the other hand this film is designed to show sober mediation in the military setting other than an action thriller (Kempley 1995). This film is set on Archbury Airfield tries to reveal how people characters as well as effectiveness is affected by different leadership approaches. Based on American 918th Bomber Group the film show the fighting crew enduring from low morale, poor performance and bad luck as a result of unsuccessful fighting mission.

This situation changes after the change of leadership which is dedicated and persistent toward improving crew’s morale through motivation and uplifting of crew towards actualization and pride. In this film different characters exhibits exemplary leadership as well as poor leadership trait (Maslin 2008). There are two characters in this movie designed to send theme battle and leadership based on different philosophies to ease tense military thriller. These leaders are Captain Frank Ramsey in charge of nuclear submarine, the U. S. S. Alabama.

He is respected person almost getting to his retirement age and led his crew with an iron hand. As he puts it he requires the crew to pressure democracy even without practicing it. “Ramsey is assigned a new second-in-command, Lt. Cmmdr. Ron Hunter (Denzel Washington); Hunter is much younger than Ramsey, Harvard educated, and believes the goal of the military in the nuclear age is to prevent war, not fight it” (Maslin 2008 para 2). Ramsey career moving to an end when atomic era is rising while Hunter highly educated and very careful in handling of nuclear weapons.

Crew in the ship becomes alert due to sprinter group of Russia decides to seize missile silo. The Alabama is allowed to fire but the situation at hand is distracted from taking of action due to receiving new external order the radio malfunctions. The leadership of Ramsey is geared to following the orders to the letter such that an order is an order and should be obeyed. Therefore the situation at hand required the crew to move forward and attack the enemy according to Ramsey leadership ideology.

According to Hunter the situation required more scrutinizing of the situation to ensure there is no doubt in the course of action taken as well as waiting for conformation orders. Meaning he gave an allowance to analyze orders as opposed to Ramsey ideology who says that an order is an order and calls for action without a second of thought. There emerge differences between the two leaders where Hunter go to an extent of threatening Mutiny against his colleague Ramsey in case a missile strike is undertaken against the enemies.

The two leaders become hostile toward each other on the direction to be taken. This is evident as shown from the eyebrow but the leaders are obliged to deliberate on the morality of the attacking Russia. The situation hot up and Alabama is given orders to fire its trident to the radicals and try to engage them. On the cause of fight between the rebels, second message is received delaying the order to fire at the enemy but this ends with loss of contact as well as command control.

This results to Ramsey refusal to hold his fire waiting for second message confirmation but this time Hunter does not agree. This results to increase tension between the sailors as well as the officers on the board due to difference of there leaders had hyped and could result to a mutiny (Maslin 2008). Reference: Maslin, Janet (2008): Crimson Tide (1995). http://movies. nytimes. com/movie/134690/Crimson-Tide/overview Kempley, Rita (1995): Crimson Tide. Retrieved on 14th October 2008 from: http://www. washingtonpost. com/wp-srv/style/longterm/movies/videos/crimsontiderkempley_c015cb. htm 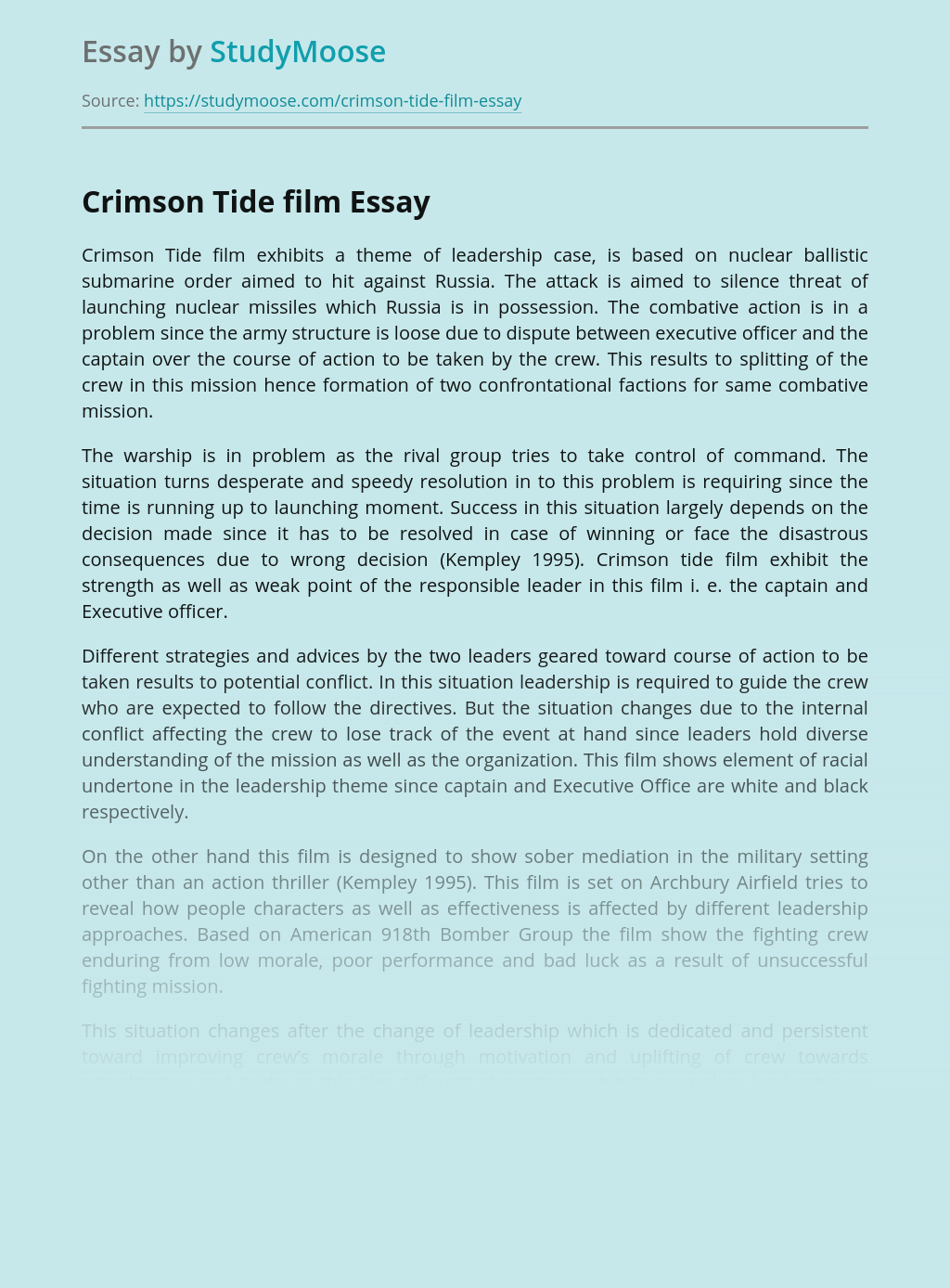 Turn in your highest-quality paper
Get a qualified writer to help you with
“ Crimson Tide film ”
Get high-quality paper
Helping students since 2015
Stay Safe, Stay Original