The Disappearance of Richard John Bingham

The 7th November 1974 was the evening of one of the most brutal crimes in British history. This night involved the disappearance of the 7th Earl of Lucan, Richard John Bingham, an attack on his wife, Lady Lucan, or Veronica Mary Duncan, and the murder of their childminder Sandra Rivett.Bingham was born on 18th December 1934 at 19 Bentinck Street, Marylebone, London, the second child of George Bingham, 6th Earl of Lucan, and his wife Kaitlin Elizabeth Anne Dawson.

Don't use plagiarized sources. Get your custom essay on
“ Crime and Mystery of Lord Lucan Case ”
Get custom paper
NEW! smart matching with writer

Bingham was mainly reared by the family’s maid, due to his father’s busy schedule and his mother’s health problems. The family moved around for most of his childhood to avoid the ongoing World War II in Britain. From his teen years, Bingham had a major addiction to gambling, which continued throughout his marriage until his disappearance in 1974.

The tragedy began at 9.45pm on 7th November 1974, when Bingham’s wife ran into The Plumber’s Arms, the local pub.

Witnesses claim she begged for help saying Help me, help me, help me. I’ve just escaped from being murdered. He’s in the house. He’s murdered the nanny!” The Lady had ran from her home in horror, leaving behind her three children. Locals became worried for the distressed woman, and quickly contacted police and an ambulance.The police officers arrived quickly, forcing open the front door, searching the scene, and finding the children in their bedrooms asleep and unharmed. The basement door was open, so the officers went in.

They found the walls smothered in blood spatter, with pools of blood covering the floor, one with some large (possibly male) footprints in it. Near the door they spotted a large, blood-stained sack with something inside. The top of the sack had been folded over but not fastened shut. Inside was the body of Sandra Rivett, the family’s childminder. She had been attacked with a blunt weapon and subsequently killed. In the hallway, officers found a piece of lead piping that had been bent out of shape and was covered in blood.When police had arrived, Lady Lucan underwent questioning, and quickly made a statement accusing her husband as the attacker.

However, Bingham was nowhere to be found.A neighbour and family friend, Mrs. Madeleine Floorman was awoken by the doorbell after 10pm. She ignored it until the phone rang, when she realised that the visitor and caller was in fact her friend Lord Lucan, but she did not see the call in time. Following investigation, spots of blood were discovered on her doorstep, confirming her theory that it was Bingham who was at the door.Bingham contacted his mother in St. John’s Wood soon after. He asked to collect his children after a catastrophe’ at the house. She quickly took the children and brought them home with her when she revealed to police that the couple had been separated for some time and that her son had been living in a flat close-by. When police searched the area, they found his car keys, passport, chequebook, driving licence, wallet and glasses. His blue Mercedes car (which had been experiencing mechanical problems) was parked outside.Bingham borrowed a Ford Corsair from a close friend many weeks prior, leading police to believe that that had been the getaway car.

Lord Lucan arrived in the car to his friends’ house after 11pm, the home of Ian and Susan Maxwell-Scott in Sussex. Only Susan was home, to find Bingham at the door in dirty clothing with a dishevelled appearance.Bingham’s story was that he had seen a man through the basement window attacking his wife. He ran inside to help and slipped in a pool of blood, scaring the attacker away. He claimed he tried to calm his wife down and clean her up before she screamed Murder!’ and ran from the house. He panicked, realising how guilty he seemed, and ran.Between the time of the murder and his arrival at Susan’s house, he made three phone calls; one to his mother to ask her to collect the children from his wife, one to his sister-in-law’s husband, Bill Shand Kydd, and one to the neighbour, Mrs. Floorman.

At the house, he called his mother again to check that she had the children, and called his friend Kydd again who did not answer.Lord Lucan wrote two letters, both addressed to Bill Shand Kydd, which were posted the following day with blood stains on the envelopes. Susan asked him to stay so they could go to the local police station the next morning, but he claimed that he had to “get back”. He soon left the premises and was never seen again.On 10th November, three days after the murder, the car Bingham had borrowed was recovered abandoned at Newhaven. Large amounts of blood were found inside of type A and type B, along with a small piece of lead piping.The childminder, Sandra Rivett, was just 29 years old at the time. She had been working for the family for just a few months at the time of her murder.

According to Veronica, Rivett put the children to bed at about 8:55pm, before making tea for herself and the Lady. As she entered the kitchen, she was battered to death with a piece of bandaged lead pipe. Her lifeless body was then placed into a canvas mailsack. Meanwhile, Veronica was growing impatient and called to Rivett to ask her what the delay was, before herself being attacked.

Lady Lucan maintained that she had never seen anyone else in the house except her husband, and claimed that she had never seen the sack before in which Rivett’s body was found.The police soon testified to finding the murder weapon. The weapon, left near the door leading to the basement, was confirmed to be a piece of lead piping wrapped with tape. A light bulb was later found to have been removed from the light at the bottom of the stairs – the only one which could be turned off by the switch at the top of the stairs. The other basement lights were undisturbed.Lady Lucan’s injuries included seven large lacerations on her scalp, bruising to her eye and injuries to the palate and on the back of her throat. These discoveries were in line with her story.One of the letters to Bill Shand Kydd was found to warn him against believing anything that the Lady said. Lucan accused his wife of being mentally ill and thought that she hated him. The other letter mentioned his bank overdrafts which exceeded Ј14,000. The letter was signed Lucky’, which was Bingham’s gambling name.

Susan Maxwell-Scott later testified that Lucan had told her he had interrupted a fight between his wife and a man in the basement and slipped in some blood. Lady Lucan was agitated and told him that Rivett was dead, and accused Bingham of hiring a hitman. He said that Lady Lucan had shown the sack to him, and he had seen the blood but had not examined anything too closely.A third letter from Lucan was later discovered. This had been sent to the owner of the borrowed Ford Corsair and referred to “a traumatic night of unbelievable coincidences”, telling him that his children needed to know that they were all he cared about, but not going into detail about the night.Sandra’s blood group was B and Lady Lucan was group A. The Ford Corsair was stained with both A and B type blood, with some areas of mixed types. There was blood staining of group B near the piano, and some bloodstained footprints.

One small spot of blood on the floor was group A, and the sack was heavily stained with group B blood but with some indications of group A. Lady Lucan’s clothing was stained mostly with her own blood with traces of group B, which could have been from contact with the attacker. The smears of blood on the letter were both blood groups also. The piece of lead piping was described as “grossly distorted” and was stained with both type A and type B blood.

Many theories still circulate about the fate of Lord Lucan. Some believe that after the incident he committed suicide, realising the remorse and guilt of what he had done. Others think that he successfully fled from the scene, beginning a new life elsewhere, or that he was in fact innocent but went into hiding to avoid false a wrongful conviction. Despite varying theories, the inquest jury was out for just 31 minutes with a verdict of Murder by Lord Lucan. 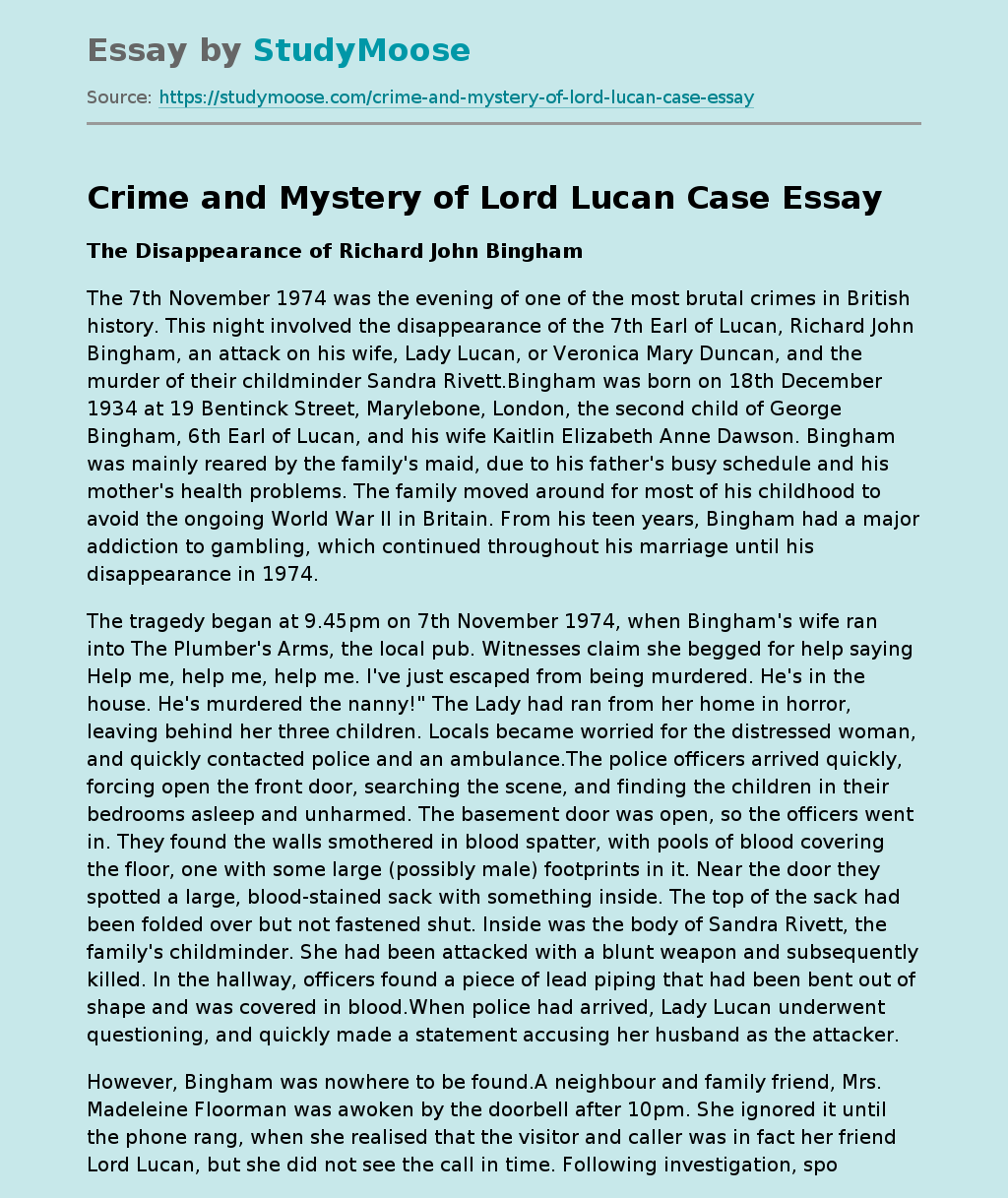