There are teens who are wrongfully accused for committing a crime. It doesn’t depend on DNA testing, eyewitness testimonies, alibis, and confessions from other suspects and victims who were involved in a crime scene. Teens, who were wrongfully accused, may or may not end up going to jail because of social beliefs and other offenses. In a 2001 documentary Murder on a Sunday Morning by Jean-Xavier de Lestrade, a murder case in Jacksonville, Florida, involving a defendant named Brenton Butler, who is prosecuted for committing the murder of Mary Ann Stephens, following Patrick McGuinness, a public defender, and his point of view of what is going on in a criminal trial.

Don't use plagiarized sources. Get your custom essay on
“ Juvenile Crime: Wrongfully Accused for ommitting a Crime ”
Get custom paper
NEW! smart matching with writer

Brenton Butler, a 15 year old teenage male, was acquitted because of false identification by an eyewitness, Butler being tried as an adult, and false statements.

In Murder on a Sunday Morning, Mr. Stephens is an eyewitness in a murder case and being tested in an eyewitness testimony. He was being questioned relating to what happened in the crime scene, the suspect’s appearance, and other details.

Sometimes, eyewitnesses have mistaken suspects for looking alike. In an interview, Mr. Cotton said that “about 90 percent of white people think all black people look alike” (Looking across the racial divide). There are misidentifications involving cross-race, which can happen in eyewitness testimonies and is “one of those mental errors” for some people (Looking across the racial divide). Mr. Stephens is one of those people who misidentified Butler because of his skin tone, which is similar towards the actual murder. Not only was Butler wrongfully accused because of misidentifications, he was accused because of how he behaves in the criminal trial.

Like other teens in trial, Butler is being accused and tried as an adult in the situation. Their social behaviors mainly affect how they function and how they behave in their everyday lives. For example, Lindsay Malloy said that “juveniles do not think like adults, they do not behave like adults, and they’re not built like adults” (TED). Teens and adults are different and in interrogations, police were treating teens like they’re adults, making an impact on how they socially behave. Butler was treated differently because he acts, behaves, and looks like an adult, even though he’s 15 years old. In other studies, it’s said that “juveniles are particularly likely to give false information – and even falsely confess – when questioned by law enforcement” (Why Do So Many Juvenile Suspects Confess to Crimes They Didn’t Commit?). Juveniles may lie, depending on the situation in the police interrogation. It also affects on how their social behaviors were put into effect, different from adults. Apart from behavior and misidentifications, people can make false statements in a criminal trial.

Butler was also acquitted because of false statements from detectives involved in the crime scene. People in the criminal trial confess and sometimes make false statements. In trial, Detective Williams wishes that he could’ve been more thorough in the investigation because he didn’t recollect the truth about what happened at the crime scene and told Butler he’d arrange an attorney for [Butler], but [Detective Williams] broke the promise (Murder on a Sunday Morning). During the investigation, he was doing an unsatisfactory job, even though he’s one of the detectives responsible for handling the crime scene. Also, those statements can affect the detective’s position and the case. In trial, McGuinness noted that people like Detective Darnell wrote their own statements, stating of what suspects said prior to the investigation. It turns out that the statements Darnell wrote what Butler said (Murder on a Sunday Morning). Some of the detectives can mistakenly write statements that aren’t true, and it can be misleading. Also, they can’t be always honest during the investigations they’re working on. Misleading statements and lack of evidence can find juveniles not guilty, along with behavior and misidentification.

Overall, Brenton Butler was acquitted because of his social behavior and other misleading evidence, regarding from race. If Butler is the suspect who shot the victim, he would’ve gone to jail and been sentenced for life in prison. It may depend on DNA testing, evidence, and eyewitness testimonies to find out who have done it. This adds up to the point if the suspect is found guilty or not guilty of committing a crime. 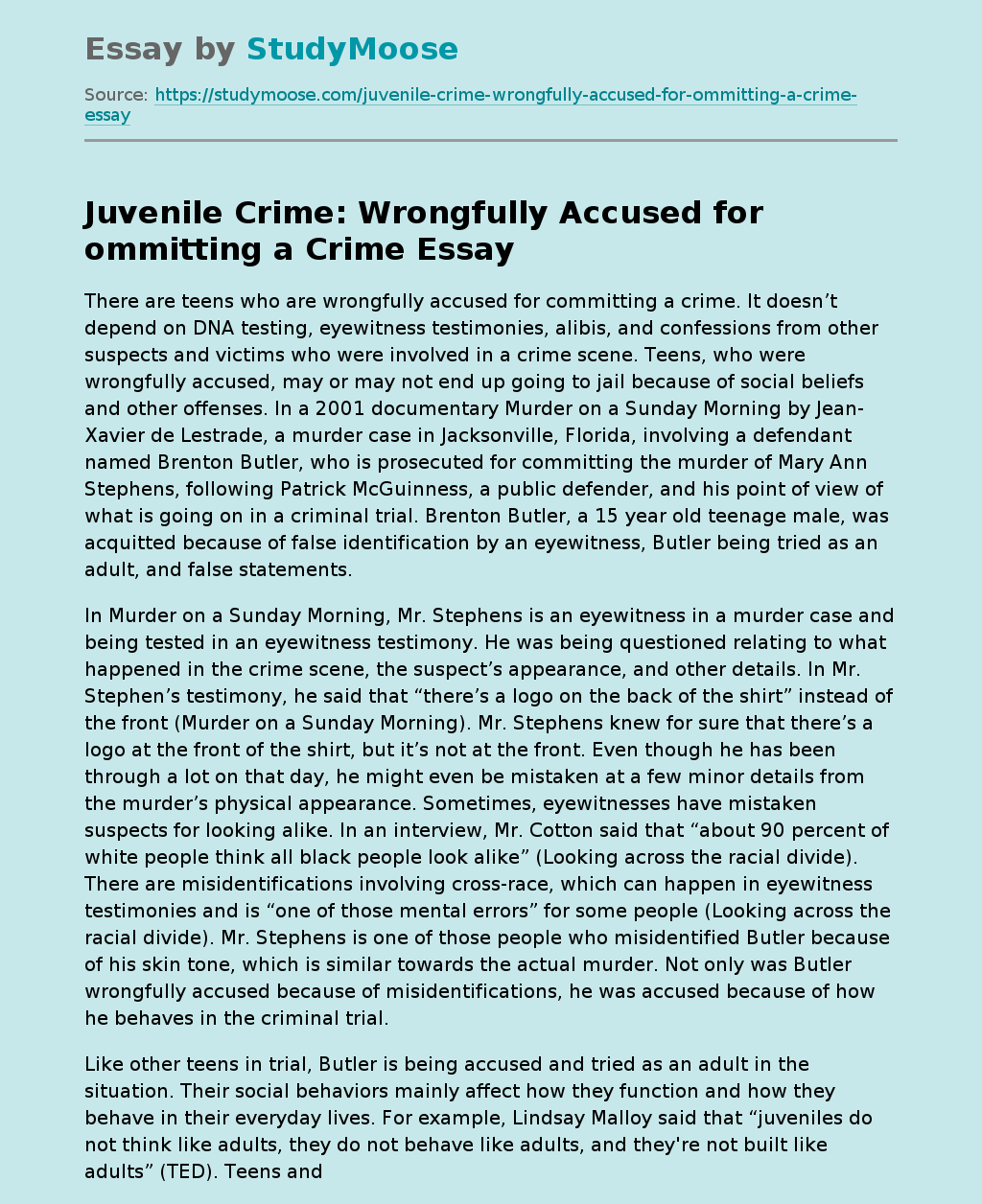