Who was Peggy Hettrick?

The Peggy Hettrick case has been a cold case for decades. The case from 1987 has been a mystery. August 10, 1998 Timothy Masters was charged for her murder. Timothy was released and charges were dismissed on January 22, 2008. The roles in this case were hard to follow. The prosecutor who has the role to present the state’s case against defense had to prove that Timothy’s knife collection, his drawings, failure to report seeing body, and the time frame of the crime was reasonably why he was the suspect in the murder of Peggy Hettrick.

The police took several years trying to build a case and didn’t come up with much. Timothy Masters’ defense attorney, who has the job of representing the accused and to prove him innocent. They petitioned new trials due to the fact of lack of evidence. The original trial did not have the DNA and the defense attorneys had not been informed of other suspects. One of the other suspects was Richard Hammond.

Richard Hammond also had a prior record of filming females in 1995. Hammond’s place of residence was 100 yards from the scene of murder with his bedroom facing the scene. Hammond committed suicide two days after arrest. The evidence of the prior suspect and reports from experts that said Masters was not guilty was enough for a judge to allow a new trial.

The judge, who has the role to ensure justice and holds the ultimate authority and is responsible for balancing the rights of the accused and the interest of society, ruled that with all the evidence that was withheld a new trial would be allowed.

The new trial found Timothy Masters not guilty and released from jail. Later the judges ruled in wrongful conviction and Timothy was granted millions. The roles of the Prosecutor were not easy in this case. The prosecutor was given old evidence that really had no concrete. The police had only a knife collection, drawings, and a date of Masters Mother’s death to build a case on. Masters defense attorney had the hard job of proving he was innocent. They took several years to come across a judge that would hear their case about the police withholding evidence from them. They also helped Masters get the settlement he deserved for being wrongfully accused. The judge had to rule that the case could be heard and all the evidence to be considered. After the new trial with DNA the judged ruled Master’s innocent.

Who was Peggy Hettrick?. (2016, May 16). Retrieved from http://studymoose.com/who-was-peggy-hettrick-essay 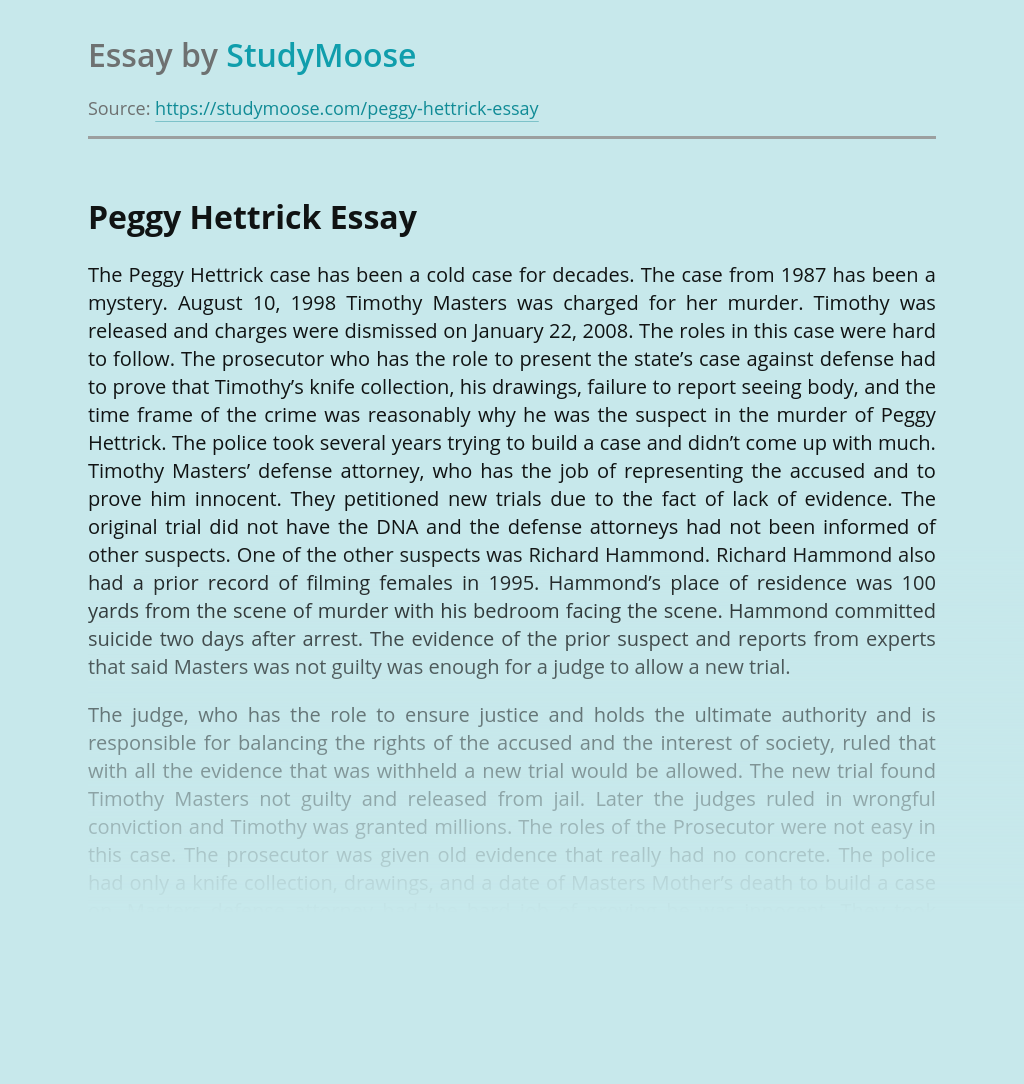 Don’t waste time
Get a verified expert to help you with Who was Peggy Hettrick?
Hire verified expert
$35.80 for a 2-page paper
Stay Safe, Stay Original