Creativity in the Workplace

Creativity plays an important role in the development of new and innovative ideas. Having this kind of skill is necessary in the success of most businesses. However, producing creative ideas is not that easy. It is not something that could easily be created in an individual’s mind as compared with other skills wherein specializing in the process will make a person do the same work over and over again. Creativity is something that is connected with the emotion of an individual, which sometimes makes it unpredictable.

Don't use plagiarized sources. Get your custom essay on
“ Creativity in the Workplace ”
Get custom paper
NEW! smart matching with writer

Since creativity coincides with the moods of a person, it cannot be prevented that the environment that an individual is in also affects creativity. This could be exemplified in the case of Orkut Buyukkokten and Google. Orkut Buyukkokten, a Google software engineer was able to achieve his dream because of the opportunity given by Google. He is responsible in creating one of the first social networking sites, which he called as Orkut. The main motivating factor that aided him to create this innovative idea is his dream to connect all Internet users so that they can all relate to each other.

The dream of Orkut Buyukkokten became a reality because of the support of his employer, Google, which allows their employees to have one workday per week on paid time to put their efforts in developing their own creative projects. The support that Google gave to Buyukkokten aided this employee’s creativity that paved the way for the creation of an innovative project (“Creativity in the Workplace”).

According to the researcher Teresa Amabile and her colleagues who studied the connection between creativity and emotion in project teams, they found out that creativity is associated with a positive mood.

A good working environment that fosters and enhances creativity helps an individual to think of innovative projects. A positive mood does not immediately produce creative ideas because there could be instances wherein even though the individual already has a positive mood he or she tends to focus his or her attention to other things rather than developing creative thoughts. Moreover, since emotions vary there are times when creative ideas will just come inside an individual’s consciousness because of something that might trigger it and which the positive mood that he or she has motivated it.

Creating an environment that motivates creativity just like the one that is observable in Google has direct and indirect benefits to business and employees. The direct effects can be seen through the edge that a company will have against its competitors because of new and innovative projects that they can produce. In relation to this, creativity also allows companies to foresee the future needs and wants of consumers that will allow them to capture the market before anyone does.

In these instances, it is highly possible that they will gain huge profit from such creative projects. Employees will also experience its benefits in a sense that they will have an environment that is more conducive for working, which will make their responsibilities easier and even enjoyable for them. On the other hand, the indirect benefits of having a workplace that fosters creativity can be observed in the employees of the company because they can be able to improve their personal selves as they can acquire and develop the skill of creativity.

In relation to this, they could even fulfill their own dreams just like what happened with Orkut Buyukkokten. The company would also indirectly gained its benefits because they would eventually have creative employees that will become an important asset for the company. Being the case, investing a small amount to be able to foster creativity in the workplace is indeed worth it because of the benefits that can be obtained from such endeavor. Reference “Creativity in the Workplace. ” Applying Psychology in the 21st Century.

Creativity in the Workplace. (2016, Aug 18). Retrieved from https://studymoose.com/creativity-in-the-workplace-essay 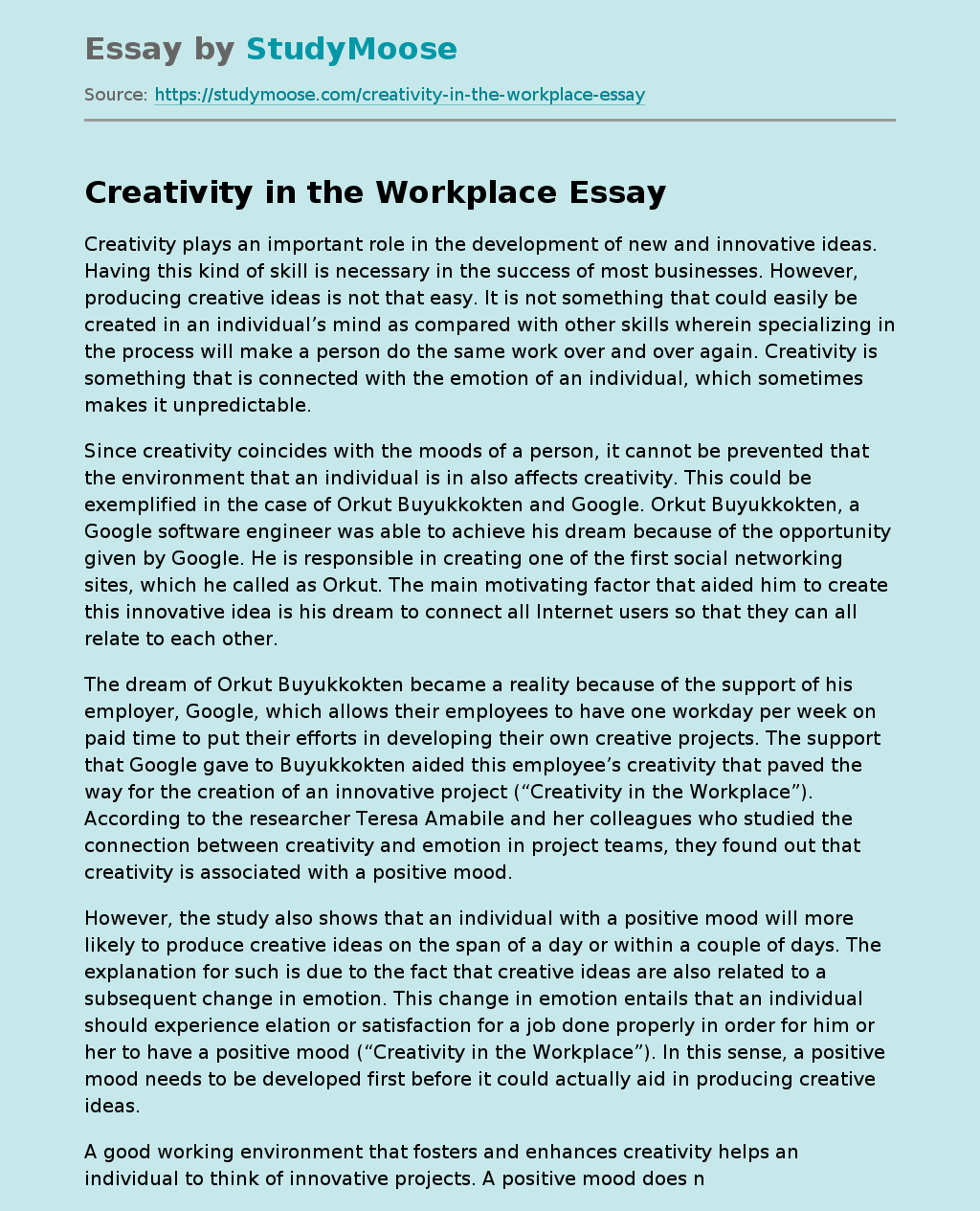