The TED talk, “Schools Kill Creativity“ by Sir Ken Robinson, laid out the idea that our education system, which is mostly focusing on left-brain thinking, is suppressing creativity in children. He argues that schools are only teaching education and not creativity which the school system should be focusing on. Sir Robinson started off by talking about how all children are born talented, have creativity, and are not afraid to be wrong. Now, when a child is told to be doing something wrong, which happens first off all, and especially, in school, they don’t want to make another mistake ever again.

Don't use plagiarized sources.
Get Your Custom Essay on Schools Kill Creativity Summary Just from $13,9/Page

That is when they lose their creativity. School and the ecological system eliminate this attitude. Robinson thinks that this, making mistakes, is the only way to develop new ideas. People should have more space doing something wrong so they possibly create something new. Robinson points out that the education system right now is made for academic integrity only, nothing else.

There is a hierarchy of subject around the world is the same: First come Math and Languages, then Humanities and concluded by the arts, such as music and art. In his mind, all of these should be valued equally, since all are equally important. Creativity is as important as literacy, but creativity is not rewarded in society. Nowadays talented people do not get the sense of achievement, because things they are good at are not valued at school; so, their creative potentials are wasted. He also argues that intelligence is not just being good at math, it’s being able to use the dynamic ability of the entire mind. Intelligence is diverse, it’s dynamic and it is distinct.

It is a interaction of different disciplinary ways of seeing things. Furthermore Robinson mentions an “academic inflation” around the world where a college degree is worth less than it was before. When he was a student, if one had a degree, he had a job. But now we need a MA where the previous job required a BA, and now you need a PhD for the other. This process is called academic inflation. And it indicates that the whole structure of education is changing. Therefore, he concludes, fundamental principles of the education system have to be changed in order the next generation to have a better future. We must recognize that intelligence is diverse, and create a new human ecology for developing creative capacities like incorporate creativity into today’s education, since it’s just as important. 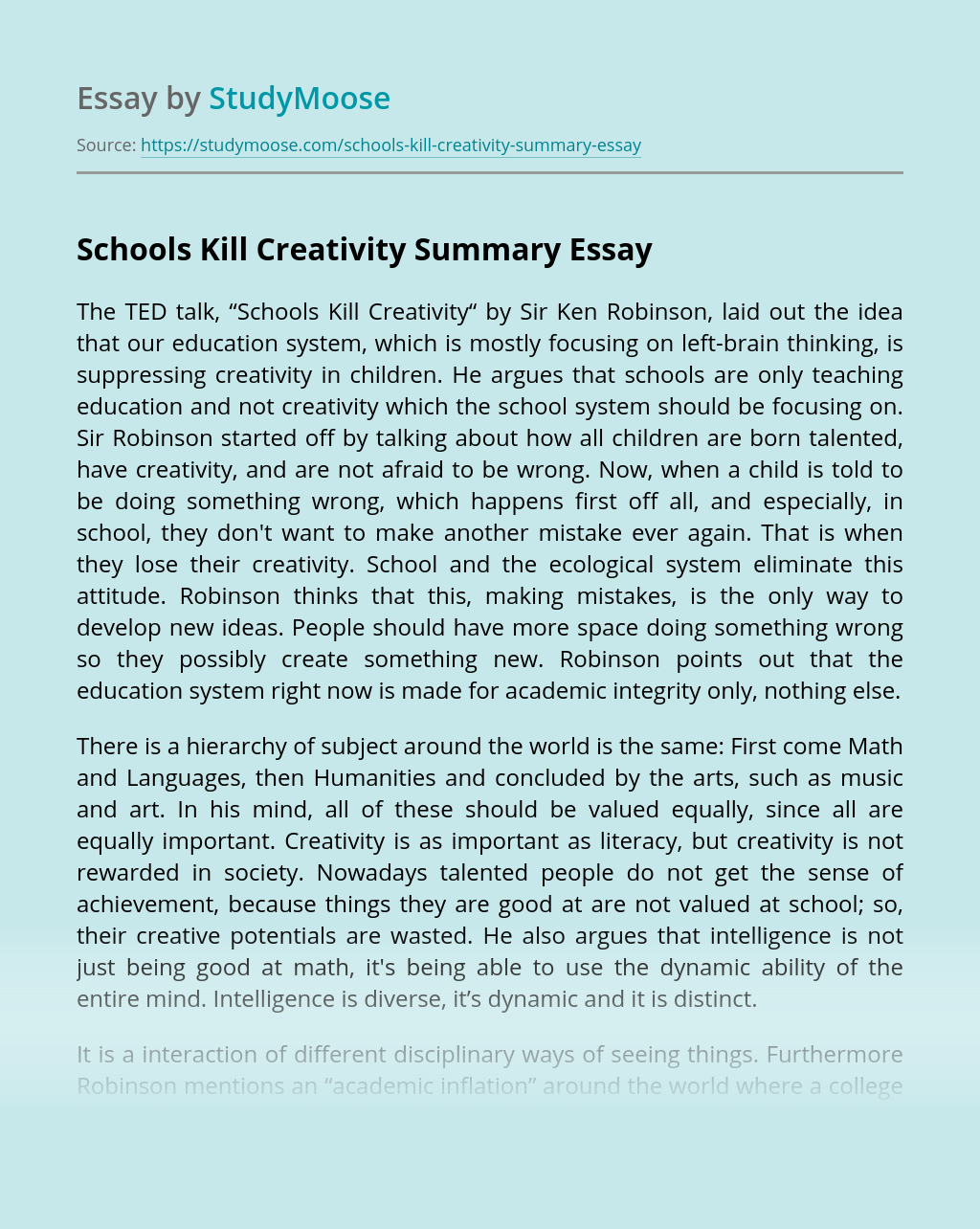 Ultraviolet (UV) light is kind of radiation having a wavelength shorter than that of white light but longer than x-rays. It has a range of 10 nm to 400 nm. The UV spectrum is divided into three, A, B and C which are named alphabetically based on the times they were discovered. These types of... VIEW ESSAY

Martin Luther was one of the greatest monks, priests, and theological teachers of Germany, along with being the symbol of the Protestant Reformation. He did not start off so religious however. One day he was caught in a frightening and dangerous storm. He prayed to God begging not to be killed, and vowed to become... VIEW ESSAY

Matale is a city, in Matale District, Central Province, Sri Lanka, 142 kilometres (88 mi) from Colombo and 26 kilometres (16 mi) from Kandy. It is the administrative capital of Matale District. Surrounding the town are the Knuckles foothills called Wiltshire. It is a mainly agricultural area, where tea, rubber, vegetable and spice cultivation dominate.... VIEW ESSAY

Manpreet Kaur, 300167970 English 105(ABM) Academic Writing: The Media Question 22/3/2019, University of Fraser Valley Carl Peters The News: An unexpected happening News is information about a recently changed situation. We can find news from different sources like television, radio, newspaper and internet. We all talk about variety of news in our daily lives that... VIEW ESSAY