Cormac McCarthy is an illustrious author, well-known for his Southern Gothic novels. This form of literature is characterized by grotesque, evil, and dark themes, all of which are concepts in which McCarthy uses a distinctive style to portray. The uniqueness found in his novel has won him several awards, and he has been a major contributor to the success of Southern Gothic literature.

He later changed his name to Cormac McCarthy. At age four, McCarthy’s family moved to Knoxville, Tennessee. He graduated from a Catholic high school and then studied at the University of Tennessee from 1951-1952, when he dropped out (“Cormac McCarthy”).

He joined the Air Force after his brief time in college, where he served for four years. In 1957, he returned to the University of Tennessee to focus on writing, and received an Ingram-Merrill Award for creative writing in 1959. In 1961, he married Lee Holleman, and they had a son in 1962.

Shortly after, McCarthy once again dropped out of school and moved his family to Chicago, where he published his first book, The Orchard Keeper, in 1965. His family then moved back to Tennessee, where he divorced Lee and then married Anne DeLisle in 1966 (they were married for ten years) (“Cormac McCarthy”).

McCarthy’s “desire to devote himself entirely to his craft” (Moser and Smith) prevented him from holding a steady job. Instead he relied on grants and awards, such as the William Faulkner Foundation Award (1965), a Rockefeller Foundation grant (1966), a Guggenheim Fellowship (1969), and the “prestigious” MacArthur Foundation ‘genius award’ (1981) (All the Pretty Horses).

Shortly after McCarthy’s separation to DeLisle, he moved to El Paso, where he wrote his fifth book, Blood Meridian, “now considered among his finest novels” (Oakes Elizabeth). His next book, All the Pretty Horses, was published in 1992, and is the first book of his Border Trilogy (the next two books in the Trilogy are The Crossing and Cities of the Plain). It was made into a movie and was also his first book to make the New York Times best-seller list. One of the only interviews McCarthy ever gave was to The New York Times after All the Pretty Horses was published, as he is a “notoriously reclusive author” (Boswell and Rollyson).

After writing the trilogy, McCarthy married his third wife, Jennifer Winkley, and then they moved to Tesuque, New Mexico. The most recent books he published were No Country Road for Old Men (2005) and The Road (2006). McCarthy still resides in New Mexico, and has an office at the Santa Fe Institute (Hobby). He continues to write and is viewed as a successful author in the literary world.

McCarthy is well-known for his Southern Gothic novels, and the themes of his books reflect this. He commonly writes about the south and southwest, and is known for his pessimistic tone- such as in The Orchard Keeper; Go Down, Moses; As I Lay Dying; Child of God; Sutree; All the Pretty Horses; and several others. An example of this is found in As I Lay Dying, as McCarthy describes the Bundren’s family trip to Jefferson, Mississippi to bury their deceased mother with a dark tone to explain the somber events (Hobby).

Another trend in his novels is his tendency to delve into the impact of the modern world on rural life (Hobby). His main focus is “on characters, primarily male and often illiterate, who are usually outcasts and whose lives are explored through what the New York Times’ Richard B. Woodard described as an ‘intense natural observation, a kind of morbid realism’” (“Cormac McCarthy”). An example of this can be found in All the Pretty Horses, as John Grady leaves Texas and travels to Mexico where he is seen as an outcast (Moser and Smith). Another book this is found in is The Orchard Keeper, as it details the lives of three people who are trying to navigate the world “in the face of modernization and urbanization” (Hobby).

McCarthy also formulates the question for “us to confront the brutality of human life and the inevitably of death” (Hobby). McCarthy intertwined his negative views in his writing to form a realistic approach of the dangers of living as an outcast in rural America. His novels contain “powerful examinations of evil” (“Cormac McCarthy 1933” 326) in order to show the harsh conditions many of his characters endure. Through grotesque imagery and a negative, dark tone, McCarthy creates a gloomy setting for his novels.

McCarthy has a unique style which contributes to the dark scene he creates with his tone. He does not always follow the rules of grammar, and “a page from any of his books- minimally punctuated, without quotation marks, avoiding apostrophes, colons, or semicolons- has a stylized spareness that magnifies the force and precision of his words” (“Cormac McCarthy”). By ignoring these simple conventions of grammar, McCarthy is able to create his own form of language that captivates his tone. With this language, he writes “stories [that] are lurid and simple” (Bell 334).

McCarthy uses both description and dialogue to achieve the intricate imagery found in his work. For example, in All the Pretty Horses, “description remained important… [but] dialogue, often comical but austere, [took] precedence sometimes” (“Cormac McCarthy”). The vivacious language he uses creates imagery that realistically illustrates the grotesque elements found in his writing.

Cormac McCarthy is able to write distinctive novels by using his own type of creative language to depict the dark themes found in Southern Gothic literature. His unique form of writing provides works that are able to smoothly combine his unique command of language to illustrate the gloomy concepts found in his novels. As he continues to keep writing, his past works will be remembered by the distinguished style of the language he used that added to the Southern Gothic tradition. 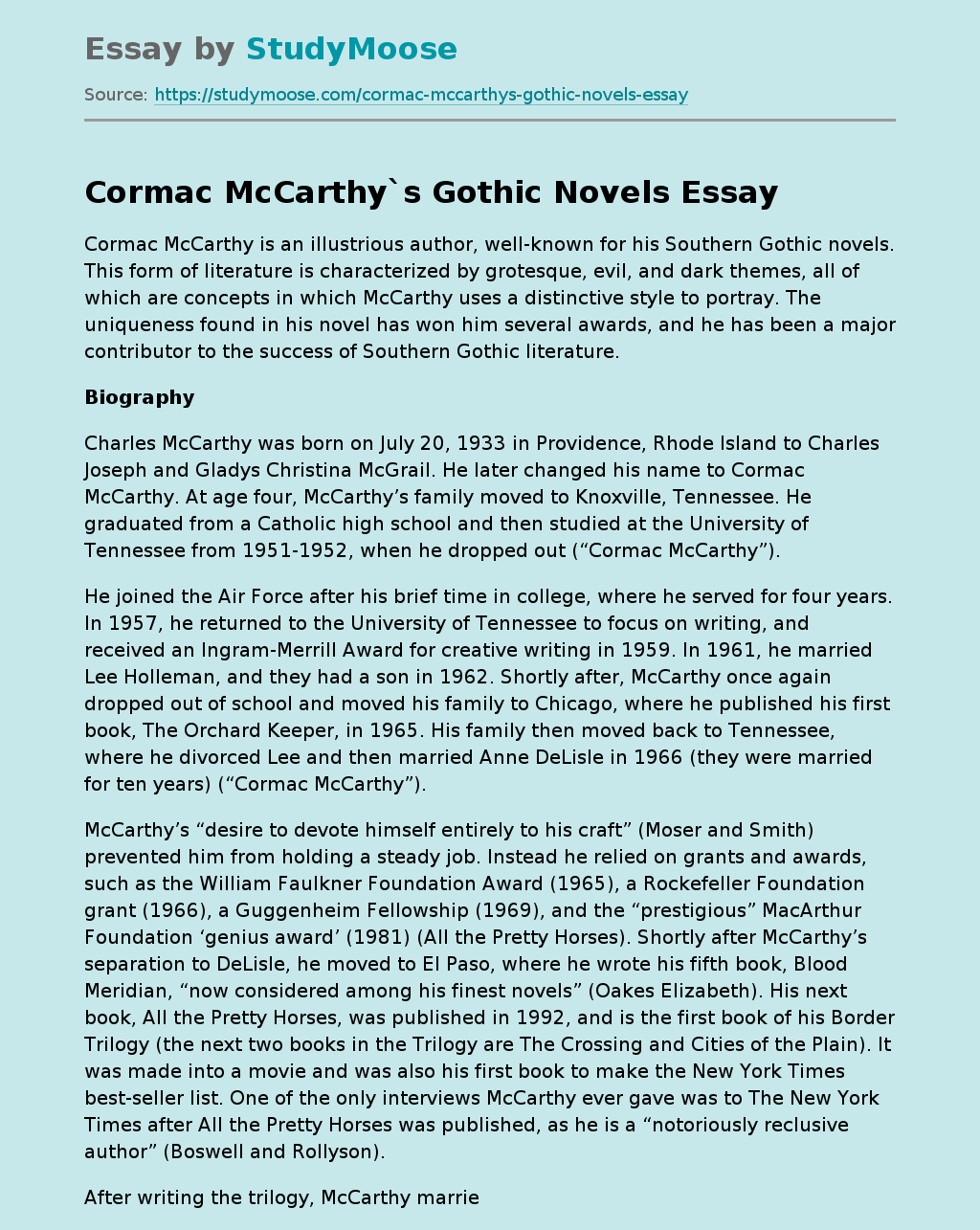