Conventions in the Horror Genre

How genre conventions are used to raise audience expectations in horror movie trailers. ‘The word genre means ‘type’ or ‘category’’ (Teach yourself film studies) it is really important as an audience member to recognise genres as then things become categorised and easier for them to understand which is more comforting. Sometimes however genres are crossed and categories are broken for example sometimes we have ‘action thrillers’ or ‘sci-fi horrors’ this is known as a hybrid genre.

Don't use plagiarized sources. Get your custom essay on
“ Conventions in the Horror Genre ”
Get custom paper
NEW! smart matching with writer

The horror genre was created to frighten/disturb an audience. Cherry (2009) reinforces this theory ‘The function of horror – to scare, shock, revolt or otherwise horrify the viewer’. These are the main conventions of a horror movie often portrayed using fast cuts, heart racing music, flashing images, unknown creatures and darkened places.

‘Horror is an ancient art form’ (www. horrorfilmhistory. com) which is still popular today because of the emotions it evokes, the audience feel comfortable with the horror genre as the generic conventions have not changed drastically over the years, the audience knows what to expect. The iconic symbols of horror such as haunted houses, unknown creatures, darkened places and flashing images are still used in all modern horror movies, although the genre evolves to fit around the era and to appeal to that audience.

‘Genres are not static, they evolve their common attributes change over time’ (Teach yourself film studies), this is because genres need to become more current for example what disturbed/terrified audiences 10 years ago may not effect audiences today.

Today most audiences are terrified by the paranormal and ghostly experiences, the trailers for ‘Paranormal Activity’, ‘Insidious’ and ‘Don’t be Afraid of the Dark’ are all based around this theme but use different generic conventions to portray their theme.

Paranormal Activity was released in 2007 and is an independent film costing only $11,000 to produce, the trailer proved uncomfortable to audiences as the generic conventions were broken. The trailer was not the usual blockbuster horror that audiences expect to see, it was shot in an average home with a home camera, the camera angles are shaky and unprofessional and the actors are unknown which gives the feel that these are real events.

Also the trailer not only shows clips of the movie but the audience reaction to what they are witnessing. This keeps the audience interested in the genre as they are not used to seeing an audience reaction – they are intrigued as to why the audience are so frightened; therefore want to see the film. ‘We derive basic thrills from triggering the rush of adrenalin which fear brings’ (www. horrorfilmhistory. com). Paranormal Activity reinforces this theory as it became a huge hit world-wide although it was such a low budget independent film.

Paranormal Activity focuses on a young couple moving into a new home which is supposed to be an exciting time and people can relate to this as everyone has moved house at some point, the fact that the film is based in a normal household immediately alarms the audience. The sounds used in the trailer for Paranormal Activity are very effective as you can hear lots of screaming and fear but it is not in the film its self, it’s the audience that we’re first shown this film.

Insidious was released in 2010 and was created by the same director as Paranormal Activity (James Wan) this draws in an audience immediately as people who are familiar with the directors work are immediately drawn to the film. Like Paranormal Activity, Insidious is also an independent film however the budget for this film was a lot higher at $1,500,000. The look the production company gave to this film is also a lot more professional as there are no home cameras and shaky camera angles.

However this film does still use unknown actors, since doing my research I have noticed that the majority of horror films use unknown actors to make their film feel more realistic. Insidious is also based around the paranormal theme which shows that audiences in this era are frightened by the paranormal ghostly experience this must be working as insidious took in a gross of ‘$53,991,137’ (http://www. imdb. com/title/tt1591095/). Also Insidious uses children and a family in a ‘normal’ home this immediately effects the audience as they can relate it to their own lives.

The horror genre has become more realistic like this as instead of using zombies, vampires and made up creatures the genre has become more based around real life and what could actually happen as it affects the audience in a more psychological way. Also using children in the trailer will immediately effect parents as they start to imagine what they would do if that was their child and how it would affect them which straight away frightens them and evokes unwanted emotions/thoughts ‘I can speak for all parents when I say the loss of a child has to be pretty much the worst thing that could ever happen to them’ (http://www.horror-movies. ca/horror_13935. html)

I have also looked at the film trailer for “Don’t be Afraid of the Dark” which was released in 2011. This film is from a different director to Paranormal Activity and Insidious however it follows a similar plot and has the paranormal ghostly edge. The budget for this film was much higher than both Paranormal Activity and Insidious at $25,000,000 the trailer is very stereotypical and uses the typical conventions of a horror trailer as it consists of multiple flashing images, heart racing music, darkness and unknown creatures.

The sound used in a trailer is very important as fast paced non-diegetic music is usually played throughout the trailer which subconsciously makes the audience feel on edge and worried, also the diegetic sounds used such as loud bangs, creaky floorboards and screams make the audience jump. Putting both of these non-diegetic and diegetic sounds together creates tension and an uncomfortable atmosphere.

Don’t be Afraid of the Dark also uses a small child within the film; this is quite controversial and usually makes older members of the audience feel uncomfortable as they imagine it as their own child. Also using a small child shows an extreme amount of vulnerability as small children cannot fend for themselves and they are not as strong as an adult. ‘How does the speed of what we see compare to watching a clip from a film? ’ (Teaching trailers) the speed of what we see in the trailer gives the audience a taste of what to expect in the film.

The trailer starts of slowly to attract the audience’s attention and get them interested in what they are watching, then the speed builds up to alarm the audience and frighten them once this has happened the trailers slows back down to an average speed to give the audience time to react and think about what they just witnessed. When comparing the three trailers together they are all very similar as they are all based around a paranormal scenario and they all evoke the ‘scared/frightened’ emotion to an audience.

Also two of the trailers use children which takes away the innocence of a stereotypical child and makes the audience feel uncomfortable as the ordinary has been changed. Paranormal activity breaks the boundaries of the horror genre the most by showing the audience reactions within the trailer as this had never been done before which attracted a wide audience and made a lot of money. It also got a lot more publicity and became an extremely famous well known film purely because

it took the audiences expectation of a horror film and changed it. However Insidious and Don’t be Afraid of the Dark are very stereotypical horror films using obvious frightening objects in their trailers which have been used throughout the history of the horror genre. The set-up of these trailers is also very stereotypical and expected because of the fast paced heart racing sounds and the fast paced flashing images.

I also think it is important that all of the actors in these films are unknown ‘why are we told who is starring in the film? ’ (Teaching trailers) this is because well-known actors with a huge fan base attracts audiences to a film, however with the horror genre this does not work as audiences cannot get a realistic feel as they are familiar with the actor and their work.

This is why I think all of the films work well as none of the actors are very well known. To conclude I think that genre is used in all of these trailers to raise the audience’s expectations but in very different experimental ways and this is successful, the ‘horror’ genre is visible throughout all of the trailers and they have all attracted a wide audience using some different experimental or stereotypical expected techniques.

Conventions in the Horror Genre. (2016, Sep 10). Retrieved from https://studymoose.com/conventions-in-the-horror-genre-essay?post 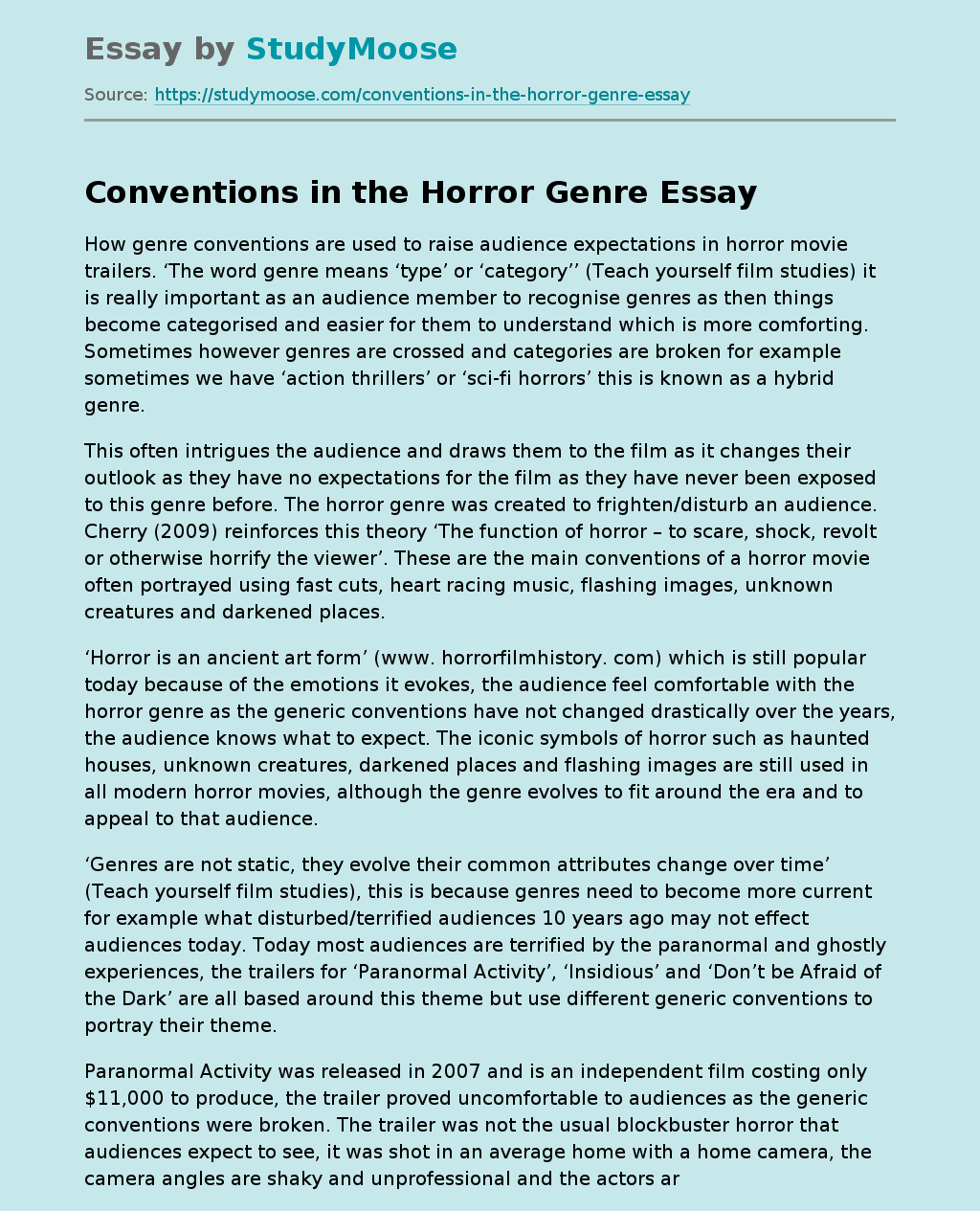