The duality of mankind, or the belief that the human mind is made up of a good and evil part, has always been a matter of great interest for many philosophers, psychologists and writers. Robert Louis Stevenson’s Dr Jekyll and Mr.Hyde is a unavoidable classic on the subject; for its portrayal of both nature in the persons of Hyde and Jekyll is efficiently drawn in the symbolic descriptions, and the significant critic that is made through the novel, which is the hypocrisy of the society where image is more important than anything else, is still relevant today.

Don't use plagiarized sources. Get your custom essay on
“ Contrast essay on Dr Jekyll and Mr Hyde ”
Get custom paper
NEW! smart matching with writer

Stevenson, in his descriptions of Hyde and Jekyll and their actions demonstrates how the good part of the human mind (Jekyll) is better, more developed than the darker one, the innate evil, embodied by Hyde, which is harmful for society and the individual.

First, the physical appearance tells us a lot about Hyde and Jekyll and, at the same time, what the author thinks about the two parts of the human mind.

Jekyll is tall, handsome and well-built; “a large well-made, smooth-faced man of fifty (…) with every mark of capacity and kindness”. His hands are “large, firm, white and comely”. In the descriptions made by observers, Jekyll appears to be a perfect, distinguished gentlemen. The good part of the human mind is therefore perceived as eminent, more distinguished than the other part. Indeed, Stevenson reinforces this position with Hyde’s physiognomy. Hyde, is seen by other people who meet him as a dangerous and terrifying beast.

Although they cannot name why, Hyde appears to those who meet him as repulsively ugly.

He is younger than Jekyll but he is ape-like and dwarfish and also much smaller than Jekyll, for instance Jekyll’s clothes don’t fit him. As the doctor says in his statement, his counterpart was “less robust and less developed”. Utterson even says: “God bless me, the man is hardly human!” and adds that Hyde looks like a troglodyte! Hyde’s hands are not at all like the doctor’s hands: “It was lean, corded (…)of a dusky pallor, and thickly shaded with a swart growth of hair”. Stevenson, through his symbolic use of hair and small stature in his description of Hyde shows that this one is less developed and less distinguished than Jekyll. The good part of the human mind, embodied by Jekyll is superior to the evil one, less developed and less attractive.

Second, the setting is very relevant to the theme and tells us a lot about the differences between Hyde and Jekyll. The story takes place in Victorian London, in the late nineteenth century, on a background of middle-class gentlemen who respect the value of respectability and the dynamic of the Victorian society. Knowing this, we see with the descriptions in the novel, that the doctor is more successful than Hyde. Dr Jekyll’s house faces onto a square of ancient, grand and handsome houses. Utterson even talks about the hall as “the pleasantest room in London”, describing it as a “comfortable and warmed by a bright open fire”. Even the butler, Poole, who opens the door, is said to be a well-dressed, loyal, elder and respectable servant.

On the other hand, Hyde’s house is situated in the foggy quarter of Soho looks like “a district of some city in a nightmare” and is surrounded by a dingy neighbourhood, ragged children and wicked looking women. Hyde, when going to Jekyll’s house, enters by the lower storey shabby door that faces on a different and dirty street: “It bore in every feature the marks of prolonged and sordid negligence (…) was blistered and stained”. Jekyll, in his last statement, describes the Hyde’s housekeeper as a unscrupulous creature. Thus, according to the Victorian values, no doubt that Jekyll has, in the novel, a larger amount of ethic than Hyde and therefore is more respectable. Hence, Stevenson demonstrates, with the different places where the action takes place, how Jekyll is superior to Hyde.

We see in the behaviour and actions of Hyde and Jekyll how the latter one is better but also how the former one is despicable. Henry Jekyll is a doctor, the caring job among all. He is wealthy, having over a quarter of a million sterling at the time and as he says in his narrative at the end; he is “well-known and highly considered”. His friends, such as Utterson and Lanyon, are all respectable and upright gentlemen who cherish honest hopes. His occupations, which are described this way:” The doctor gave one of his pleasant dinners to some five or six old cronies, all intelligent reputable man, and all judges of good wine” are all worthy and reputable at the time. He also has always done good things for the society, and “had always been known for charities (…) and no less distinguished for religion”.

Throughout the novel, he always tries to undo the evil done by his other nasty part, Hyde. If the doctor does so, Hyde does exactly the opposite. Right from the beginning, we know that Hyde hangs around in the dirty areas of London, seeking undignified pleasures and immersing himself into depravity, vices and sins. His acts are described by Jekyll as “inherently malign and villainous”. His depravity and immorality are also underlined by the different ghastly crimes, taking aim at innocent people, he commits. He first tramples a little girl and leaves her ill-treated, crying on the street and then beats to death a old man. We see that Hyde is not only less developed and more primitive in his actions than Jekyll, but also that these very actions are harmful for the society and lead to the destruction of the individual, as the author demonstrates when Jekyll ultimately commits suicide.

In conclusion, Stevenson demonstrates through the physical appearances, the setting and the actions of his characters how the evil part of our mind is smaller and weaker than the good one. By showing how Hyde is much smaller than Jekyll and by showing that the places and the frequentations he has are less respectable than those of Jekyll, he demonstrates the superiority of Jekyll and therefore, the superiority of the good side over the evil one. Stevenson illustrates this by stating clearly the differences between Hyde and Jekyll, the evil and good side. The dark one is not only smaller, weaker and less distinguished but also leads to the destruction of the society and the individual. Stevenson also explores how the repression of the Victorian society leads to the release of that dark side, due to the will to break free from the value of respectability. Thus, we can ask ourselves if this value and the dynamic of repression that was taking place at that time weren’t partly responsible of the crimes that were committed in the Victorian era. 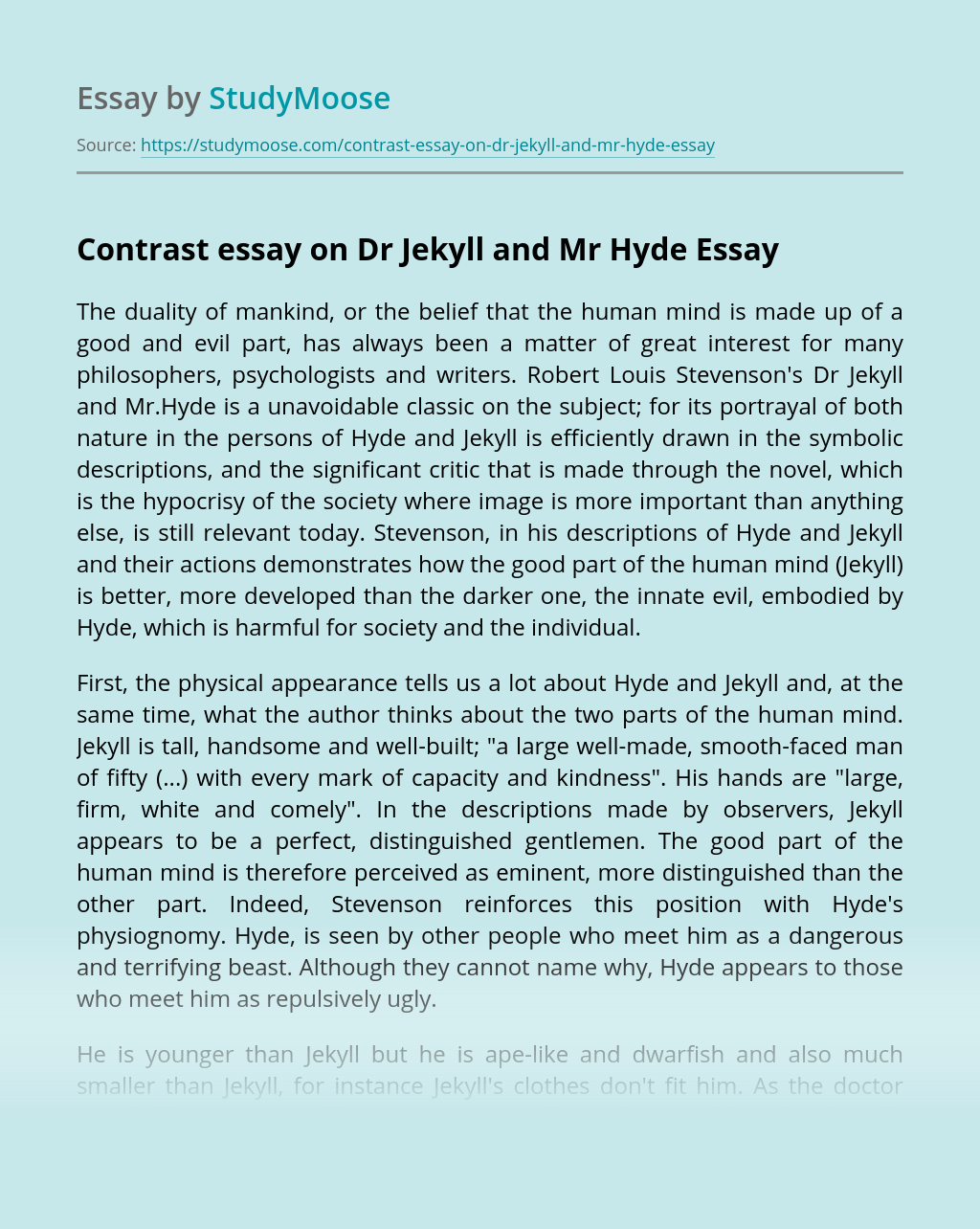