Do you know why our country isn’t ruled by one person with complete control such as a dictator? It is because our Constitution guards against tyranny. Tyranny is defined as harsh absolute power in the hands of one individual. In 1787, 55 delegates met in Philadelphia to fix the existing constitution, the Articles of Confederation. They decided to go forward with a new constitution that would completely guard against tyranny. The Constitution guarded against tyranny in several ways such as federalism, separation of powers, checks and balances, and the equality of large and small states.

Don't use plagiarized sources. Get your custom essay on
“ Constitution Guarding Against Tyranny ”
Get custom paper
NEW! smart matching with writer

(Document A) Powers given to the states are powers such as to set up local governments, hold elections, and establish schools. Document A) Powers shared by the two governments are powers such as making laws, enforcing laws, and taxing. (Document A) Federalism protects against tyranny. The second guard against tyranny was separation of powers which means the power is separated into three branches. This is done so one person or branch of government cannot become too powerful. These branches of power are separate and distinct. For example, the legislative branch consists of the senate and House of Representatives, the executive branch consists of the President, and the judicial branch consists of the Supreme Court.

Document B) Separation of powers protects against tyranny. The third guard against tyranny was checks and balances which means each branch can check on each other. This makes sure that one branch cannot get to powerful. For example, congress can approve presidential nominations and impeach the President from office, but the President can veto a Congressional legislation. (Document C) Another example is the president nominates judges, but the Court can declare presidential acts unconstitutional. Document C) A third example is the court can declare laws unconstitutional, but congress can impeach judges. (Document C) Checks and Balances protect against tyranny. The fourth guard against tyranny was the equality of large and small states which means larger states are not powerful over small states. For example, the senate of the United States is composed of two senators from each state, and the House of Representatives are appointed by population. (Document D). The equality of large and small states protect against tyranny. 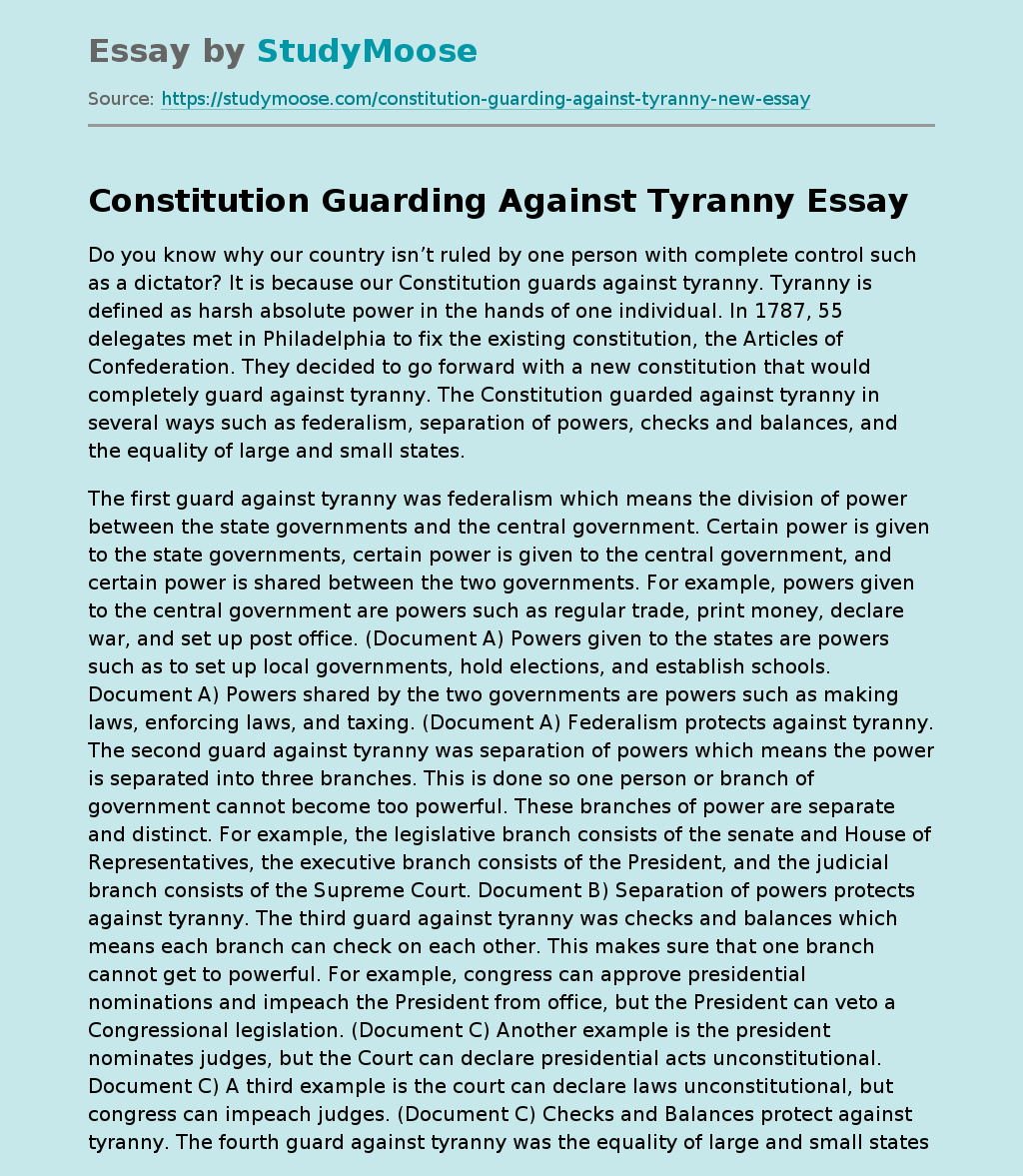