In his poem “Consolation,” Billy Collins attempts to comfort himself after not being able to visit Italy in the following summer. He creates a “consolation” for himself by listing all of the downsides to travelling to another country so filled with history and culture. However, his tone makes it seem as though he is unsuccessful at convincing himself that staying at home is actually a good thing. The reader can tell that he is actually disconsolate, that his efforts were in vain.

Don't use plagiarized sources. Get your custom essay on
“ Consolation by Billy Collins Poem Analysis ”
Get custom paper
NEW! smart matching with writer

Collins begins his poem by noting how nice it is that he will not be touring Italy this summer. This first line seems to slightly shock the reader. It is surprising that one would actually prefer to stay home rather than to take the chance to travel abroad. It seems as though the author has made plans to travel that have fallen through leaving him disappointed. If he thought that not going was so “agreeable,” he would not have made the plans in the first place.

Also his choice of words throughout the poem make him seem extremely bitter about missing the trip especially when he begins the poem with “how agreeable it is…” He then mentions that Italy has “torrid hill towns.” Collins seems to be using an exaggerated description for the town showing his true feelings towards not travelling. He makes it seem like Italy’s towns would be a burden to journey through because they would be extremely hot and tiring. He says that he’d rather travel his own “local, familiar streets, fully grasping the meaning of every road sign and billboard.

” This description of his hometown is much less interesting than Italy’s. Although he already understands his local surroundings, he believes it would be better to continue to look at them all summer long. It seems as though Collins is trying very hard to convince himself that staying at home is a much better option.

Collins then lists all of the things that his hometown does not have that Italy does. While some people would think that the abbeys, “crumbling frescoes or famous domes,” were interesting, the author tries to turn them into something negative as if they are nothing all that special. He also lists some of the things he won’t have to do such as “memoriz[ing] a succession of kings or tour[ing] the dripping corners of a dungeon.” While he tells himself that not having to spend time studying about Italy’s culture is a good thing, there is still a part of him that wants to learn all about it. Collins continues by showing his significance in both Italy and his hometown. At home, he has a reputation and has made a name for himself. He is in more command than he is in Italy where he is “dwarfed by pillar, arch, and basilica.” In a way, Collins can be compared to Satan from Paradise Lost in which he finds it “better to reign in Hell than to serve in Heaven.” Collins tells himself that it is better to be important in a plain location than to be insignificant and “dwarfed” in Italy. He also mentions that in Italy, he wouldn’t know the word for ice since he doesn’t know the language but at home, he knows everything including the waitress’s name. He says that at home, he “will slide into the flow of the morning paper, all language barriers down.” Here, Collins is claiming that he’d rather read the newspaper, a bland task in comparison to travelling Italy because at least at home, he understands the language including all of its idioms. He is giving up his chance for adventure abroad so that he can slip into his same routine.

In his final full stanza, Collins’s tone seems to more strongly reveal his true feelings for missing out on Italy. He writes that he won’t have to find someone to photography him. By mentioning something so specific, it seems as though he had hopes for the trip that he can’t have and that he is actually very disappointed. He continues to mention specific things such as “not puzzl[ing] over the bill or record[ing] in a journal what [he] had to eat and how the sun came in the window.” Collins seemed to really want to travel to Italy for the summer and to do all of the little things that it had to offer. Despite all of the language barriers and the hassles of the trip, he would actually have enjoyed it all but no longer has that opportunity. One can confirm that Collins is bitter about not being able to go to Italy because he writes that he sped off “down a road that will never lead to Rome, not even Bologna.” As most people do when they have missed an opportunity to do something, Collins feels as though he will never be able to go to Italy, not the most famous cities or even the less known ones. He has lost all hope for the future and begins to wallow in self-pity. If he really did not want to travel, he would not mind if this figurative road did not take him to Rome and would not have mentioned it at all. Though he attempts to mask his disappointment or even to alleviate the pain, he is ultimately unsuccessful.

Overall, Collins is attempting to convince himself that travelling to Italy would not have been worth it by listing several negative things about travelling. He wanted to go to Italy so desperately that when he couldn’t, the only thing he could do to comfort himself was to make up a list of trivial downsides that he probably would not have minded so much if he had gotten the chance to go. 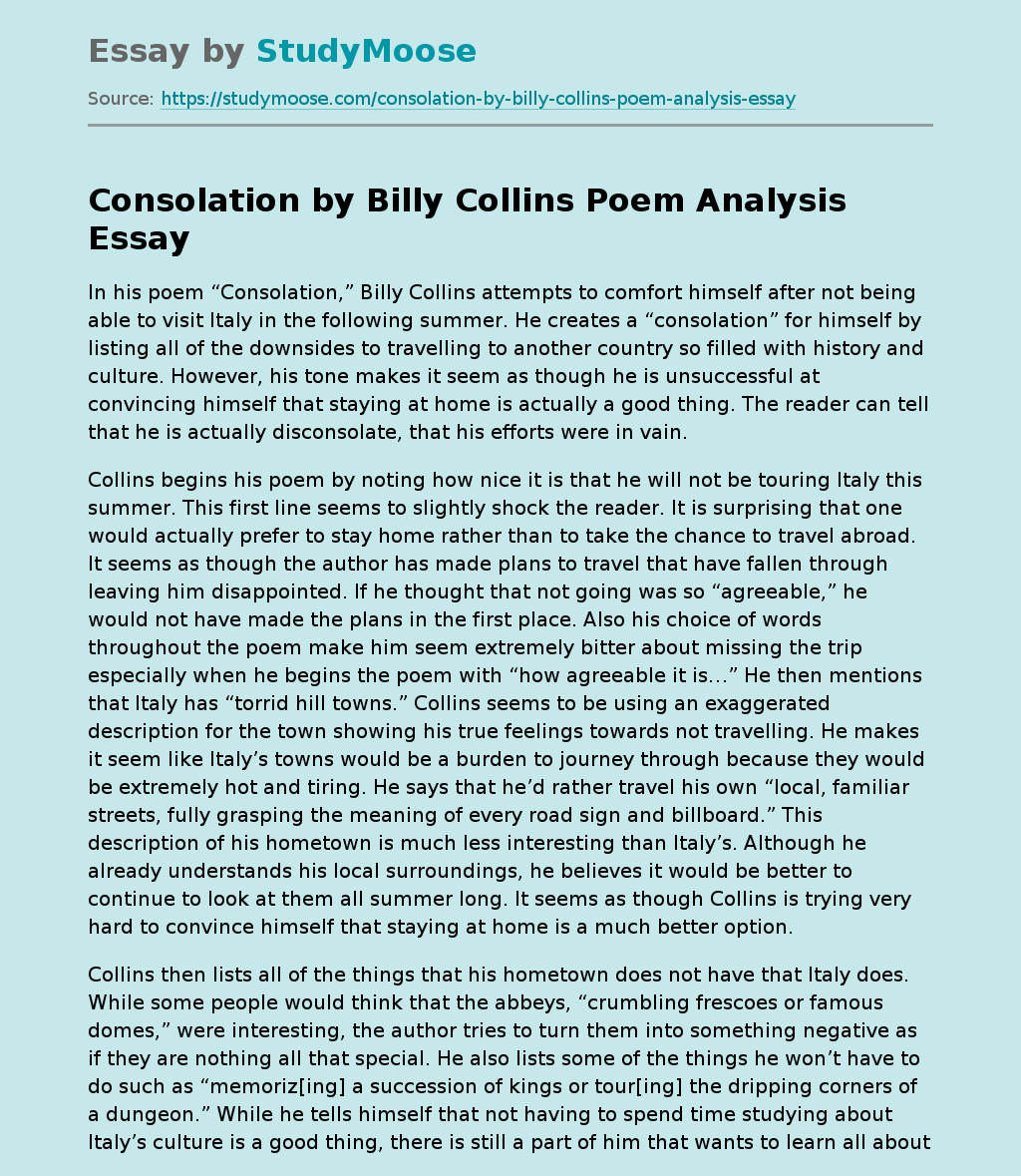