Consciousness In "To The Lighthouse"

Stream of consciousness is a modernist narrative technique that attempts to create the illusion that the reader is experiencing the unstructured flow of observations, ideas, memories, and associations that occur in the mind of the fictional character. The stream is often illogical and puzzling in its apparent disorganization, but some patterns of association, habits of thought or recurrent images begin to emerge, providing indications of the overriding fears, preoccupations and interests of the character.

Don't use plagiarized sources. Get your custom essay on
“ Consciousness In “To The Lighthouse” ”
Get custom paper
NEW! smart matching with writer

In To the Lighthouse, we find ourselves in a small community of people who are expected to have individual interests and experiences. The Ramsays and their eight children are on holiday on the north coast of Scotland.

In addition to the Ramsay family, included on this holiday are friends and acquaintances. Mr. Ramsay is a professional author and philosopher and the characters that Woolf has placed with him all seem to be of the intellectual set; Lily Briscoe is an artist, Augustus Carmichael is a poet, William Bankes is a botanist, and Charles Tansley is a scholar.

Part One of To the Lighthouse, The Window, shows us the basic personalities of Mr. and Mrs. Ramsey and the intricacies of their relationship with one another, as well as the mind set of other characters presented by Woolf.

As the plot progresses, it appears to move on normal constructional lines from scene to scene. However, it must be remembered that Woolf uses the stream of consciousness technique, so that the change of scene is more a change of aspect, as we move from the consciousness of one character to the other. Woolf has developed her characters to be of similar intellect. Because of the closely knit, homogeneous world in which we find ourselves, Woolf has taken great care to make the movement from one consciousness to another easy and natural.

To the Lighthouse is divided into three parts. Woolf marks both the change of scene, as well as the passage of time, ten years, by numerical heading. This does not interfere with the flow of the steam of consciousness, and actually fastens the reader in the plot securely, one knows where one is. The middle part entitled Time Passes, contains the facts that Mrs. Ramsay has died, Andrew has been killed in the war, and Prue has died in childbirth, as well as the decay of the neglected house. Time Passes acts as a connection between the first part, The Window, and the third part the ?The Lighthouse. Since the characters in The Lighthouse, find themselves set in the same environment as The Window it is easy for the reader to find his position in each of the characters consciousness.

When I first sat down to read To the Lighthouse, I was a little confused. But as I continued reading, I recognized that through the stream of consciousness technique, Woolf made it possible for me to experience the Ramsays home and the lighthouse, as well as see and feel the characters personal reflections. Virginia Woolf successfully transported me back into a period long gone. As I finished reading To the Lighthouse, I actually visualized the green lawns, the blue ocean and the lighthouse in the distance.

Consciousness In "To The Lighthouse". (2016, Jul 24). Retrieved from https://studymoose.com/consciousness-in-to-the-lighthouse-essay 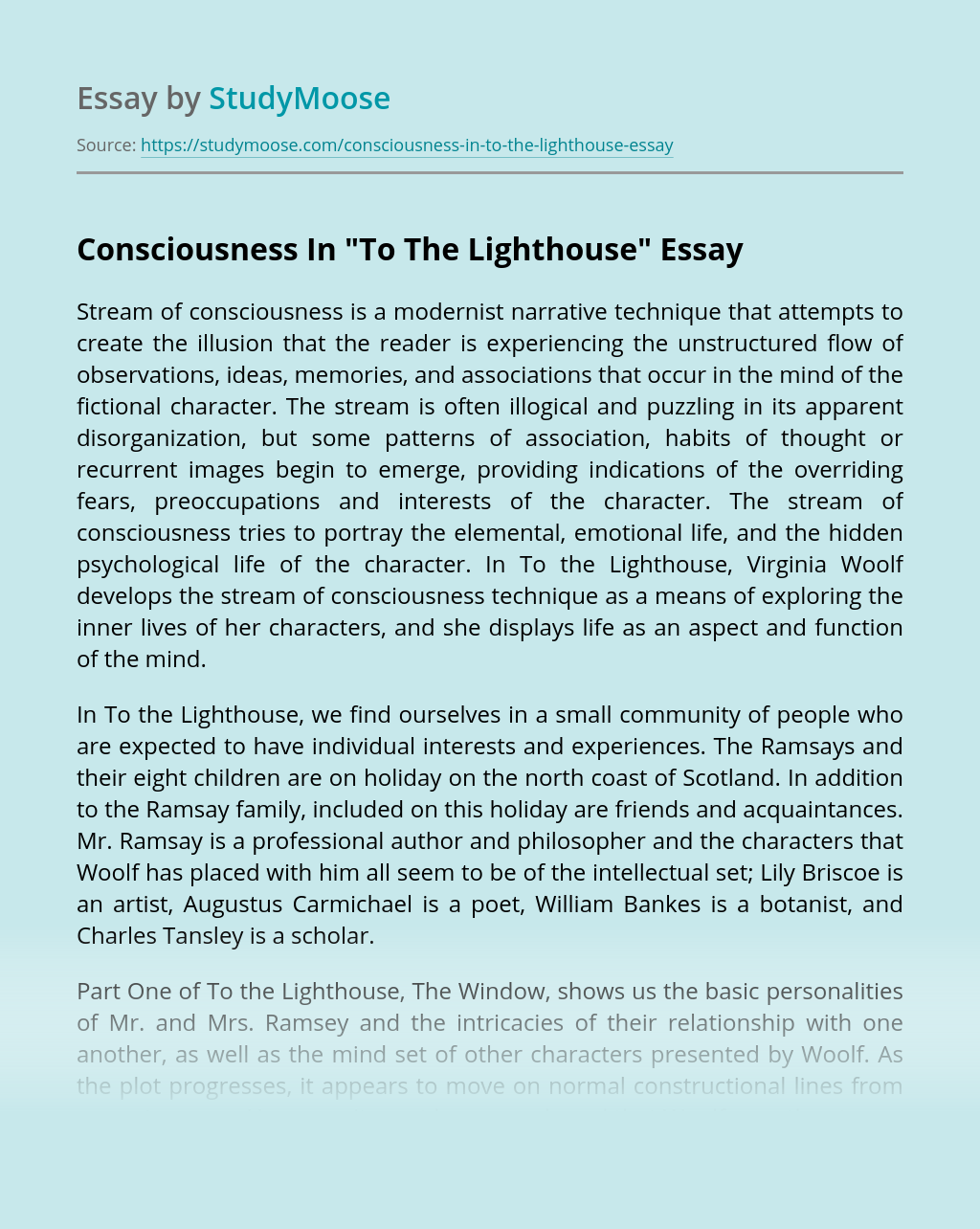