Interview Three-years-old Sally is the only child of Karen. Sally is loved by her mother and receives too much care than supposed. Her mother describes her as a stubborn girl. Sally has developed a very bad behavior for a year, Sally starves herself for hours and days. Almost every day Sally is starving herself to access material or receive controls. Whenever Sally wants to get anything she desires mostly fast food and mostly unhealthy snacks.

Don't use plagiarized sources. Get your custom essay on
“ Conducting a Functional Behavioral Assessment (FBA) ”
Get custom paper
NEW! smart matching with writer

She gets aggressive when she’s requested to eat homemade food. Sally is so stubborn and she keeps her starvation until she gets the wanted. When a family member of Sally is trying to give her food or convince her to eat she gets aggressive and start shouting, crying and hitting. The behavior is more manageable and not problematic when the father or uncle is around, she actually is more responsive to orders and easier to convince to eat. Karen is very afraid that sally may get weaker and thinner due to the starvation, she showed some concern about her health and malnutrition.

She tried to change the behavior many times, Karen tried to ignore her so she doesn’t keep this behavior to not harm herself, the mother also tried reinforcing Sally to get rid of starvation in order to get fast food, by ordering her to eat the homemade food, so if Sally ate like 3 homemade meals she will get one fast food or unhealthy snack. Karen said usually Sally is calm until the maid or mother request her to eat, after this she’s acting very aggressive and rejecting the food, and hitting the home-maid and the mother, Sally starves herself in order to get what she desires.

The mother hopes to see Sally eating healthy homemade food and to have a good appetite. Karen thinks that this behavior is resulting from spoiling and pampering her child. Sally’s functional behavioral assessment is summarized in Table 1. FATIMA J. AL HASHMI2018-2019 OF 26

Table 1. Functional Behavioral Assessment Function of the Behavior Based on the interview with Sally’s mother, the function of Sally’s behavior is access to material. To be more exact, Sally gets aggressive whenever the homemade food is represented. Sally starts to hit the maid or the mother and cries as a denying sign. Unfortunately, Sally keeps doing this behavior until she gets the material which in this case is junk food or snacks. Whenever Sally starts starving and refusing homemade food the mother gets some junk food to satisfy her or more like make her eat. Sally doesn’t show these acts when her father or uncle are around, this may be because of her familiarity with her mom reactions and know what she will do while she’s afraid of the men in family, I guess she might consider them as semi-strangers because she’s with her mother or maid most of the time and her father works mostly overseas so she not familiar to interact with him as a person, as a man I believe she noticed that most men are the ones who give orders and instructions in the Arab region, so she thinks that she has to obey their orders. Antecedent Sally behaves normally and not aggressive at all, Karen gives Sallythe meal to eatBehavior Sally start hitting, screaming and crying in order to avoid this food and get another, and refuses to eat anything but junk food, and starve fordays sometimesConsequence Karen does whatever Sally wants to calm her and to make herdaughter eat so she doesn’t get malnutritionFATIMA J. AL HASHMI2018-2019 OF 36

Recommendations Obviously, Sally wants to take control by altering her mother through her behavior, so whenever she starves herself her mother does get upset and do something about it. Without noticing, the mother reinforced her daughter to keep this behavior by doing whatever she wants. The girl now thinks when I need something I’ll just starve myself and I’ll eventually get it. There are some interventions that Karen may do to inhibit her daughter’s behavior. Firstly, Karen can do a Mystery Motivators where she tells her child : “if you eat the whole homemade meal and behave well, you will close your eyes and take a small paper from a jar that has some motivational phrases and few reward ones so whenever the reward paper is chosen you will get a random thing that you like” (this can be snacks, candy or other things that is not related to food that the kid desire, using the tablet/phone.), additionally Mystery Motivators can be used weekly as well, Sally has to follow instruction, and behave in a good way so Karen can randomly choose any weekend and give Sally a bigger rewards, such as going to place they like or visiting a friend . As a consequence, Sally will learn the habit of eating home food and good behavior in order to get rewards and get used to it. Secondly, Behavior Contracts, sitting a contract is a good way to exhibit a certain behavior or act, when the parent plans to establish a contract with the child they have to make sure that it is something that they can live with. Since Sally is starving herself, refusing to eat and being aggressive when asked to, Karen can set a contract with Sally to reinforce her to eat healthier and stop the aggressiveness, she may choose some random rewards that Sally may like or other food-related rewards to give in a certain time frame, Karen can ask her daughter about the time frame that she prefers (in terms of days) and what she likes to get at the end of the selected period, this will get Sally involved in the contract and make her more motivated to preserve it. Karen may also FATIMA J. AL HASHMI2018-2019 OF 46

remind Sally before meals to increase chances of exhibiting this behavior, or whenever she asks for a reward or a treat so she keeps it in mind and works for it. Thirdly, there are some changes that Karen can make in order to inhibit the starvation of Sally, they are more indirect but it can change the behavior of Sally. Because Karen is spoiling Sally she never noticed that she is forcing her to do things and punishing her for not doing them and there is nothing in between, either this or that. This act of Sally’s mother is what triggered the starvation and the aggressive behavior that Sally is showing. I would suggest being more open to the relationship and not just give orders and apply penalties, having harmony between parent and child would require having a connection and understanding between both parties. Here are some recommendations that I think would have a good impact on the behavior of Sally: 1. Listening to her: Listening to kids may sound not convincing as a solution to a defiant child. However, it is actually a very essential thing that every parent need to do, not listening to them can initiate bad behaviors and aggression in order to express feelings and thoughts, the child may become defiant if she/he feels that they are not being heard. Since Karen is not listening to her daughter, not knowing her preferable things and not letting her express herself she might without noticing exhibited this behavior in the first place. 2. Connect with her: Having no connection between both parties will lead to disharmony and misunderstanding. Karen apparently is just forcing her child to do things, otherwise, she is punishing, Karen never knew why Sally is not doing the orders and what she would like to do or eat. Karen needs to talk to Sally more often to know about her thoughts, her favorite things and what she likes. Asking about what she likes to eat would be a good start to inhibit the starvation and the aggression that may result from not liking the food. If she connected with her daughter and showed interest in what Sally likes, Karen may notice that Sally is being more responsive than before and therefore the behavior she is displaying will be easier to manage. FATIMA J. AL HASHMI2018-2019 OF 56

3. Give her options: You will never know the power of giving options to the child. Giving the child options can inhibit many behaviors like aggressiveness and stubbornness, giving options make the child feel the control and as if they are in charge of the decisions, parents should give children options not directives. Therefore, Karen can use this strategy to inhibit her daughter starvation and stubbornness by giving here options of food she wants to eat and not command her to do so if she forced Sally to eat she will be more stubborn and will show aggressive behavior against her and the maid. On the other hand, giving her choices will make her more receptive to the orders. For instance, Karen may ask her child what sauce she wants, or what dish she prefers to be cooked, Sally may choose between plates or places to eat, giving her choices will make her more responsive. Last but not least, Karen can figure out more reinforcing methods to make her daughter eat, for example, she decorates the food so it looks like an animal or so, she might also get some fancy kids’ plates that Sally can’t resist and will eat anything with them. In my point of view, every mother can adjust the methods to fit her child interest and use their weakness to make them respond and exhibit certain behaviors. FATIMA J. AL HASHMI2018-2019 OF 66 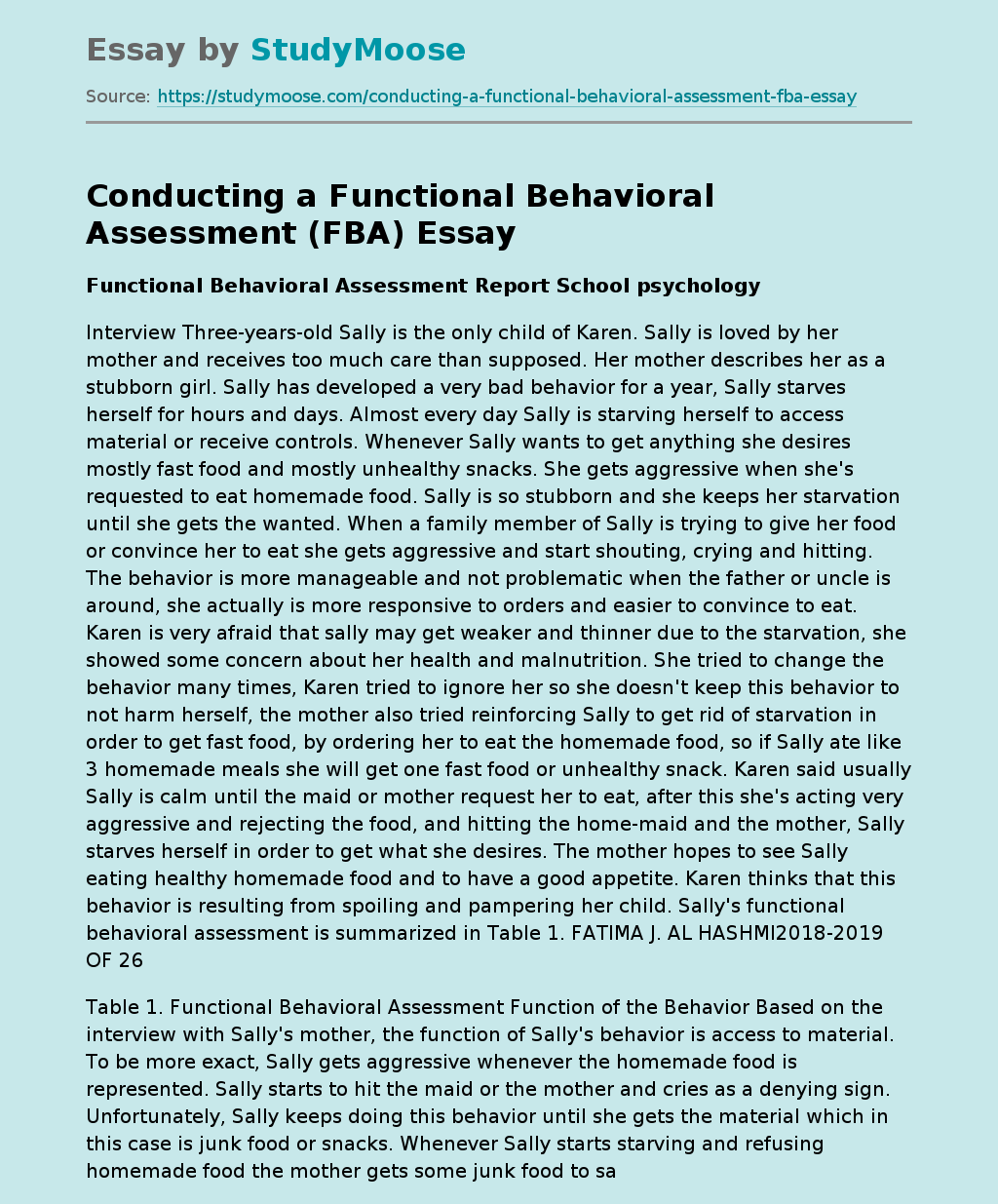