In the essay “Condoms: the New Diploma”, by Rush Limbaugh published in his book The Way Things Ought To Be in 1992, Limbaugh talks about how distribution of condoms in schools can lead to teenage promiscuity and encourages sexual activity at an early age. Limbaugh’s use of Reductio ad absurdum counter attacks the opposition’s argument on condom distribution and is effective since it is hard to attack the opposition.

Limbaugh attempts to refute his opposition with a reduction ad absurdum argument.

Don't use plagiarized sources. Get your custom essay on
“ Condoms a New Diploma Critical Analysis ”
Get custom paper
NEW! smart matching with writer

He uses rhetoric example intended to demonstrate his belief that condoms distributes and promotes sexual activity. He provides his definition of gender and sex roles. He claims that sex has consequences by using “Magic Johnson” as a specific example and implies that some people will not say this.

He claims that his opposition opposes teaching abstinence by using examples from the City Board of Education in New York and Jacksonville, Florida. He also claims that there is a culture war on condom distribution and that it is a part of the current situation.

Limbaugh provides statistics and analogy intended to show that condoms are not effective by placing a comparison between condoms and airplanes. He wraps up this essay by using another reduction ad absurdum on sex education.

The Authors purpose is to convince the reader that condom distribution in schools can lead to contracting Sexually Transmitted Disease or STD’s and encourage promiscuity. He wants the reader to understand that distribution of free condoms in public schools is ridiculous and misguided.

Limbaugh uses reductio ad absurdum by saying that kids are going to have sex and that we cannot stop them. He also uses other examples such as kids are going to smoke and why not provide them with cigarettes and many more examples from guns and safe sex centers. Here Limbaugh uses this rhetorical tool to prove to the reader that by providing a free condom to the teenager can lead them to doing other things that may harm them since they cannot be stopped. He continues on by going past giving away free condoms and installing Safe sex centers. Limbaugh proves a point that by stating that by giving away condoms they compromise their standards making his point hard to argue against therefore his tool of using reductio ad absurdum proves to be effective to the argument.

Limbaugh uses another specific example such as Magic Johnson, a basketball athlete for the Los Angeles Lakers. He uses an adult celebrity to prove a point that the same stakes are involved as an adult who aren’t aware to the dangers of having condom-protected sex. Still using the same tool of reductio ad absurdum, Limbaugh identifies that there are many people out there that will have sex with others that may have contracted AIDS with or without using a condom and that many people believe that condoms can help them prevent from spreading STDs. This tool is proven to be effective since it is hard to argue that adult human beings will have sex with or without the knowledge that their partner has aids as to teenagers having sex with or without the knowledge of a condom.

Limbaugh uses statistics to prove that condom failure rate can be as high as 20 percent and compares it to the safety of an airplane. The statistic used for the condom proves to be incorrect since the failure rate of a condom is very low ranging from 2 to 4 percent if used correctly. The comparison used between the lives of passengers in a plane to the failure of a condom used by any being is far off since condoms sold as a product are proven to reduce the chances of pregnancies and sometimes STDs. This tool is ineffective since the statistics of the condom failure is questionable and the analogy of an airplane since products are made to be safe and would be discontinued if it has failed its standards.

Limbaugh creates an offensive persona throughout the essay as he uses examples such as Magic Johnson or Johnnie and Susie as a way to taunt the opposition by refuting the argument many times throughout the essay. Since we cannot attack a reduction ad absurdum by pointing out its ridiculous nature it proves a point within itself and as Limbaugh speaks about how condom distribution can compromise our standards, he proves a point that the opposition is willing to accept that teenagers will have sex no matter what and it is not helping in the prevention of STDs. Limbaugh’s persona of being the offensive and taunting the opposition proves to be effective since giving a teenager a condom can encourage them to have sex.

In conclusion, Limbaugh’s use of Reductio ad absurdum and the many tools to prevent schools from distributing condoms can lead to promiscuity. His use of this tool is effective as he claims that condom distribution in schools can compromise standards and have it lead from having sex to smoking and the use of guns. It can also lead them to contraction STD’s since condoms cannot help in the prevention of STD’s and AIDS. The overall persona can prove to be offensive to a reader or his opposition but proves a point since his attempt to refute the opposition can prove to be difficult to argue against. Limbaugh’s strategies are not meant to scare the reader but to argue against the opposition. 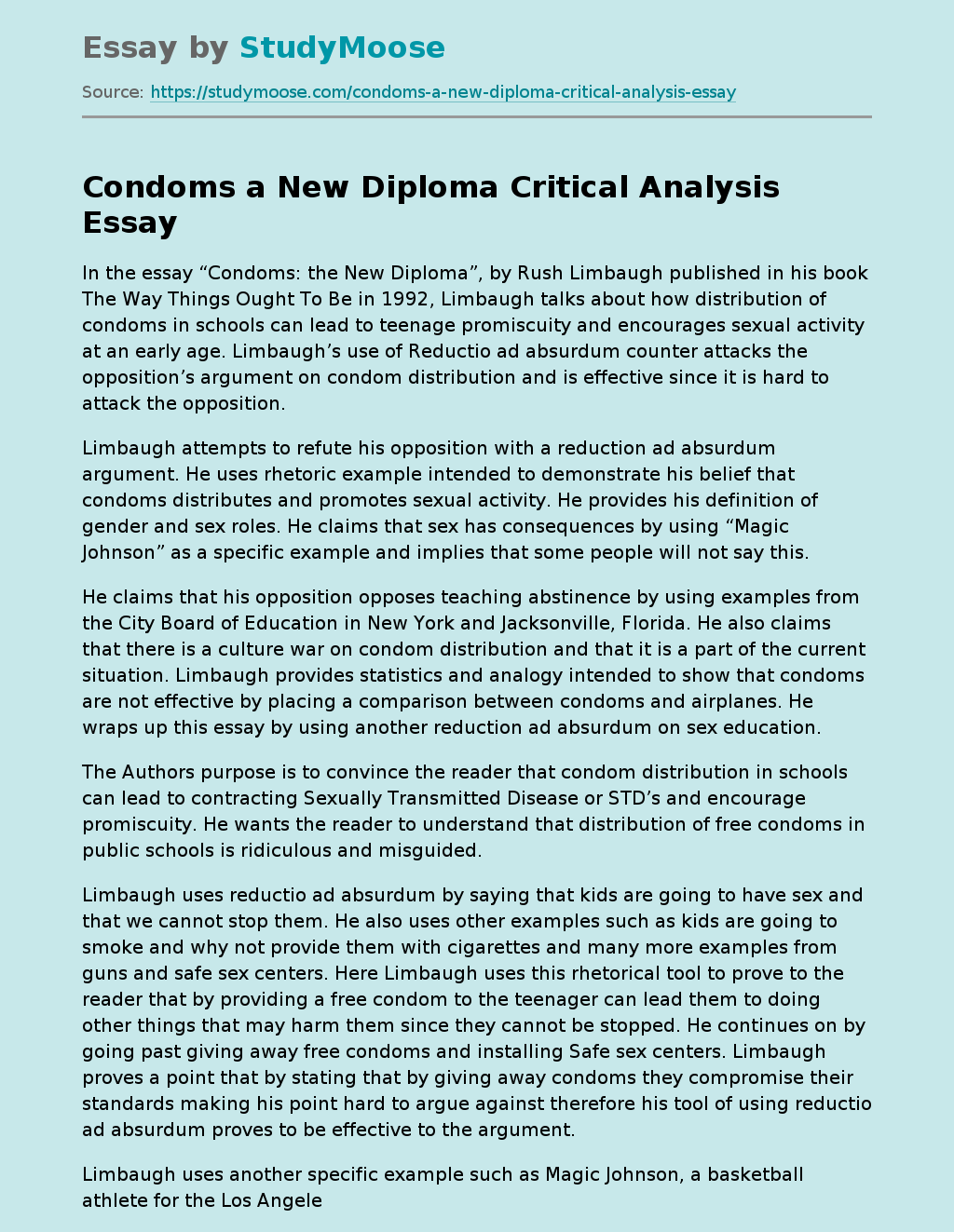