This English extended essay investigates the question of women’s role in the society which is described in the novel The Grapes of Wrath by American author John Steinbeck. The core of the article is exploring the role of females during the period of American Great Depression in the 1930s. It was the time when nation experienced famine, droughts, financial difficulties which lead to chaos in the country. John Steinbeck as the representative of Lost Generation describes those terrible conditions when people were forced to move cities, migrate to find food and shelter.

Don't use plagiarized sources. Get your custom essay on
“ Sample Extended Essay as part of IB Diploma ”
Get custom paper
NEW! smart matching with writer

The author puts a strong emphasis on role of women who took responsibility of hope-givers, breadwinners and made lots of emotional and physical efforts to save the values of integrity within the family and community.

The extended essay and the additional supplement to the IB diploma programme answers questions about the reasons of American Great Depression and its negative influence through the prism of realistically described valleys of California and the life of Joad family.

Research paper explores gender differences in the ability to combat difficulties, female’s readiness to make the community close-knit, the more detailed characteristics of the principal female character Ma Joad, and the comparative analysis of Ma Joad and Rose of Sharon. The extended essay theory is based on analyzing books which are mentioned in works cited page as well as personal perception of the novel.

The essay has clear structure which makes up four principal parts. This literature extended essay can be divided into outline, main body, conclusion, and references.

Theoretical value is connected with the essay theory knowledge of the main trends in literature during the period between two world wars. Practical aspect is that the extended essay help students understand the necessity of investigating historical and social background of the authors and their pieces of writing.

During the period of the late thirties, America experiences the rise in female’s independence, and that could be noticed in the increased interest among the representatives of gentle sex to develop professional career. This tendency was even encouraged during Great Depression. Volatile financial and economic state of the country demanded resourceful and proactive people. Those extreme conditions gave women a great spur to show their power and ability to lead.

John Steinbeck in his novel Grapes of Wrath describes the immensely significant role of women. He mentions that previously they had to “stand beside men” but when critical circumstances approached country, they became active and self-conscious community members. The American writer illustrates a unity of a mother’s loving and leader’s circumspect character of Ma Joad. This extended essay reveals subtleties of Steinbeck’s depiction of females having the role of mother as life vocation. Ma Joad has instinct to help others, and she is concerned about both her own family and people of the community.

The description of female characters plays significant role in the readers’ perception of women. The writer depicts Joad’s hazel eyes which have seen many tragic moments. They are full of memories, strengths, and even weaknesses which she hides from everyone. However, Steinbeck says that eyes are the mirrors of the soul, and all true emotions can be seen there. The author depicts the unique features of her appearance that whenever somebody looks at her, she shows ‘superhuman understanding.” By meticulously describing those traits the author emphasizes on the blend of female’s tenderness and confidence. He is amazed at how women can mix these different features, and this controversy attracts readers.

The author develops the character of Ma Joad to show that she is not a unique woman who personifies emotional resilience. She is just a representative of the whole new community of the gentle sex who become influential members of society. The proof for that may be in the lack of the name of this character. She is always called Ma, although other people in the novel have exact names. Steinbeck has used this literary device to generalize the character of female. Doing this, he shows that Ma Joad possesses all those strong features which many other women developed during that harsh period in the USA.

This article aims at proving that John Steinbeck depicts real life conditions in The Grapes Of Wrath. The role of women is examined to show their importance within the social development of the country during the 1930s. 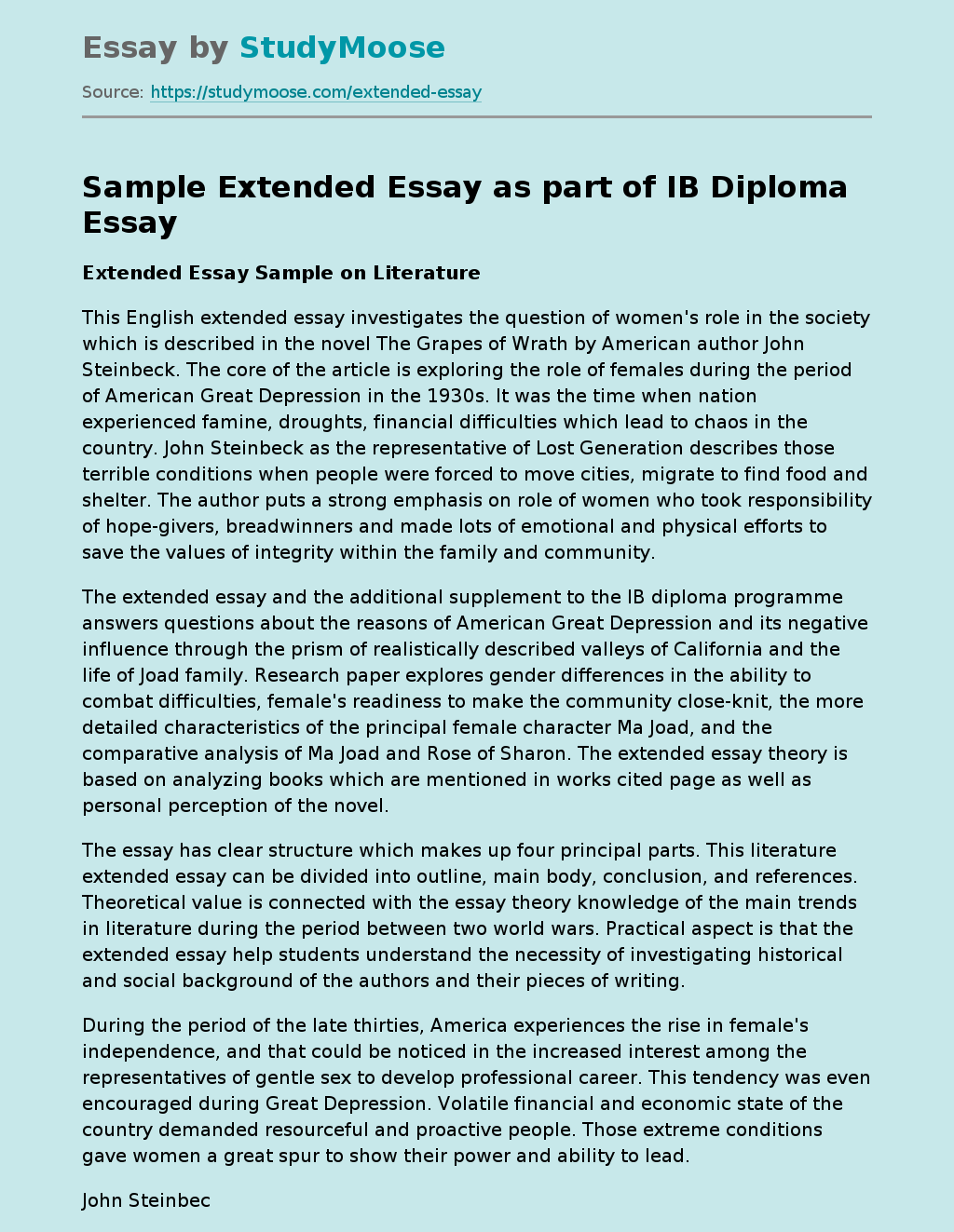