New Criticism For my literary criticism assignment, I have chosen to discuss the critical approach of New Criticism. Briefly, New Criticism is quite accurately described as a literary movement, one that challenged the established norms of typical literary criticism techniques and teachings. This undertaking began in “the late 1920s and 1930s” (Siegel) over growing concerns literary critics were too focused on “matters extraneous to the text” (Siegel). The norm prior to the aforementioned technique was to measure the author’s personal history, life, psychology, and relationship against the story they wrote to most appropriately evaluate their work.

Don't use plagiarized sources. Get your custom essay on
“ Critical Approach of New Criticism ”
Get custom paper
NEW! smart matching with writer

Proponents of New Criticism believe work “should not be judged by reference to considerations beyond itself” (Siegel), that literature should be evaluated solely by its contents. What attracts me to this theory is the critical thinking implicit in utilizing it correctly, as well as its black-and-white approach to literature. It is a valuable tool for assessing the integrity of literature without the distraction of famous names or fancy time periods to bias my opinion.

I’m positive before this technique was used readily many undeserving works were praised solely because of their author, while many deserving titles were overlooked because the author had neither title nor stature.

What I find most attractive about discovering this theory used in a literary analyst’s work is knowing I will find true unbiased criticism and praise over the literature in question. I would feel more confident that what I was reading was genuine; potential praise is more deserving and subsequently, any evaluations both negative or critical, would derive from a purely logical and professional opinion.

Mainly because of this technique, I understand readers will be persuaded to distance themselves from the accomplishments and shortcomings behind the literature’s inception and completion. This in turn implies that any element of the author or of their relationship to their work will distract from a proper analysis, persuading readers to see a piece of literature through a much finer lens.

The reader understands to distance themselves from extra pretenses and is potentially convinced of a work’s greatness. There are many drawbacks to this specific literary approach, inherent to the longevity of the practice and its practical applications. To clarify, I believe many works of literature are powerful and important specifically because of the time they were written, who the author was, the authority they held, and absolutely “matters extraneous to the text” (Siegel). We value the opinions of a movie, sports, or literary critic precisely because who they are matters.

Another example I believe demonstrates this is The Diary of Anne Frank. It is powerful and emotional on its own but is amplified knowing when, where, and why Anne wrote it. When I apply New Criticism to Sir Thomas Malory’s Le Morte d’Arthur the aura shrouding the work dissipates, leaving behind one of our greatest tales. Malory is an oxymoronic criminal rapist and complete failure of a knight. He escapes the reality of the English French wars through his writing in his jail cell. If we did not apply New Criticism to separate the author from the text, we could never have fully appreciated the magnificent and beautiful literature that came from such an ugly place. The quote by Northrop Fry fits perfectly into this Literary Criticism Assignment as it is imperative to consider its meaning in the context of analyzing literature and our own evaluations.

“The student must either admit the principle of polysemous meaning or choose one of these groups and then try to prove that all the others are less legitimate. The former is the way of scholarship, and leads to the advancement of learning; the latter is the way of pedantry’ (Anatomy of Criticism 72) Fry means for us to understand that when we find something that cannot be confined to one idea, we must either understand that other ideas may also be correct and explain this article, or we naively pick one idea and fight to show that nothing else is correct. When using techniques such as New Criticism we must be aware not only of its values, pros, and cons but also of the existence of other legitimate techniques with their own set of values, pros, and cons. The importance of this consideration is teaching us to recognize and evaluate the tools we are using to process literature. It is possible that a beautiful and perfect literary criticism is only defined so through the measures of one technique.

Others will likely find flaws and counterarguments that contradict the validity of the said technique, however, once we recognize this dichotomy and where it stems from, we can visualize and understand these arguments and gain more from the literature. In summary, I believe it is important to recognize and appreciate all forms of critical and theoretical approaches in our analysis of literature. This way we can gain the best and most appropriate tools from each theory to enhance our understandings and appreciation of literature. 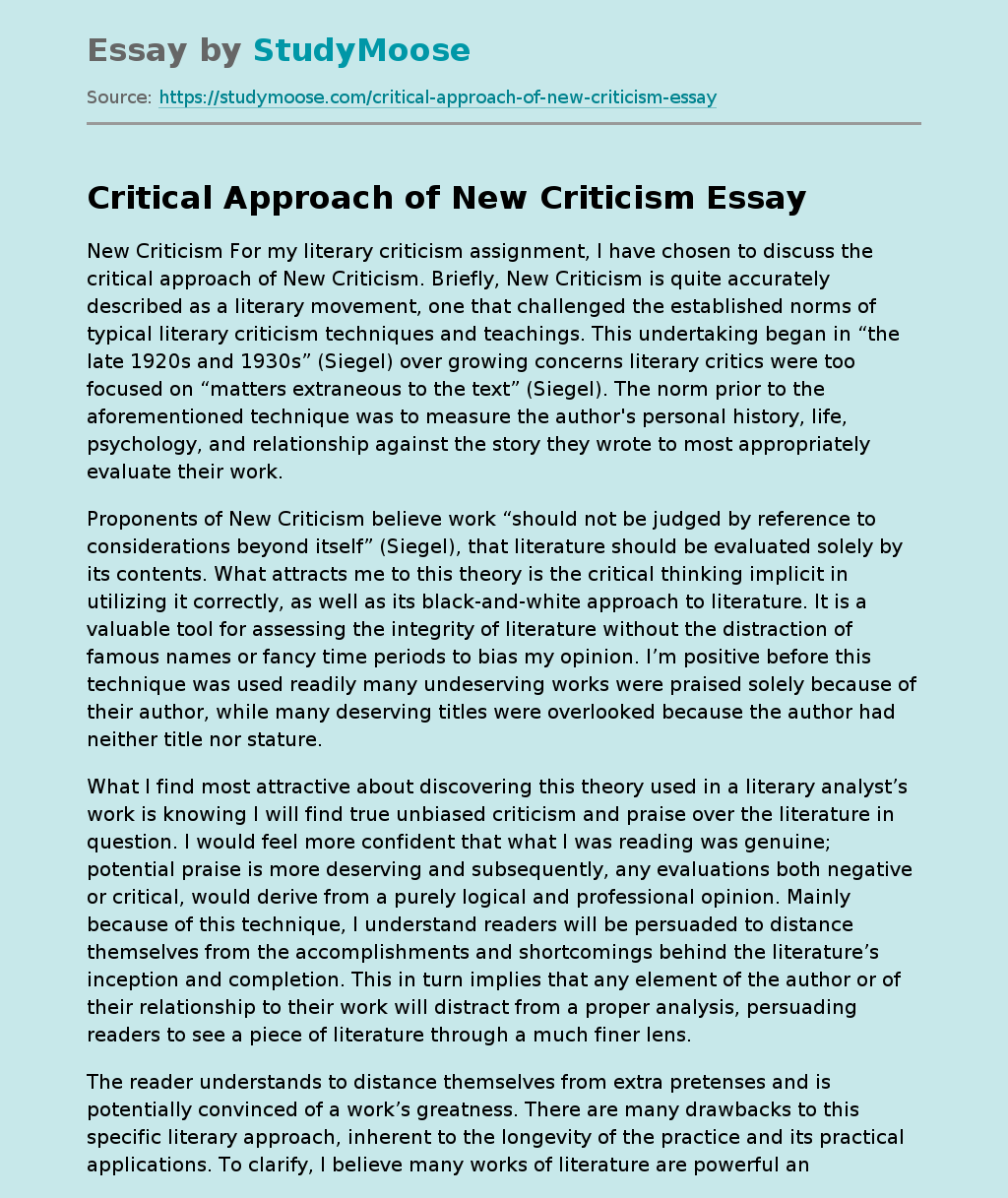