A practical criticism of 'For the Union Dead'

The aquarium is gone. Everywhere, giant finned cars nose forward like fish; a savage servility slides by on grease (For the Union Dead – Robert Lowell) In Lowell’s poem ‘For the Union Dead’ there is an underlying theme of the lost idealism which caused the American Civil War and its replacement with commercialism and materialism. “Giant finned cars nose forward like fish”, here Lowell reminds us of 20th century materialism by bringing about the image of the highly desired Cadillac (“finned cars”) whilst combining it with the comparison of a fish.

Don't use plagiarized sources. Get your custom essay on
“ A practical criticism of ‘For the Union Dead’ ”
Get custom paper
NEW! smart matching with writer

This in my mind creates the idea of mankind following each other mindlessly to each material craze and status object. Moreover the image of men following each other (“nose forward”) alludes to the idea of slavery indicating that rather than liberating the African Americans from slavery we have in fact, all become slaves to our material needs. Also the aquatic references seen throughout the poem seem like references to Alan Tate’s poem ‘Ode to the Confederate Dead’: “Now that the salt of their blood stiffens the saltier oblivion of the sea, seals the malignant purity of the flood.

This could again be an indication that perhaps the North (and indeed all of ‘liberated’ America has in fact lost its war against slavery to materialism and are now in the “Oblivion of the sea”. Although this then creates a feeling of reliance on our objects as us fish are reliant on the oxygen in our ‘metaphoric sea of materialism’ which is also symbolized earlier in the poem by the image of Colonel Shaw’s monument in Boston Common being propped up to by planks so It can survive the building of an underground parking structure: “Propped up by a plank splint against the garage’s earthquake”.

This not only shows this new found reliance on objects but represents the war Colonel Shaw was (and now again is) fighting against slavery.

I pressed against the new and galvanized barbed fence on the Boston Common. Behind their cage, yellow dinosaur steam shovels were grunting as they cropped up tons of mush and grass to gouge their underworld garage (For the Union Dead – Robert Lowell)

“Galvanised barbed fence […] grunting […] gouge” brings to mind the contrasting image that these new mechanical “Dinosaurs” are our slaves. Which is made to seem cruel not just by the use of “Grunting” but by the personification of the cranes: “They cropped up tons of mush and grass”. This suggests that the 20th century American has not just forgotten the Idealism of the North but has in fact taken up that of that South! This gives further meaning to the fact that the work these new ‘slaves’ are doing is knocking over and damaging Shaw’s monument which is close to falling into the hole in Boston Common (being dug for a new parking structure) which represents the killing of Shaw and his Idealism by Materialism. “The ditch where his sons body was thrown and lost with his Niggers” – Again.

A practical criticism of 'For the Union Dead'. (2016, Apr 22). Retrieved from https://studymoose.com/a-practical-criticism-of-for-the-union-dead-essay 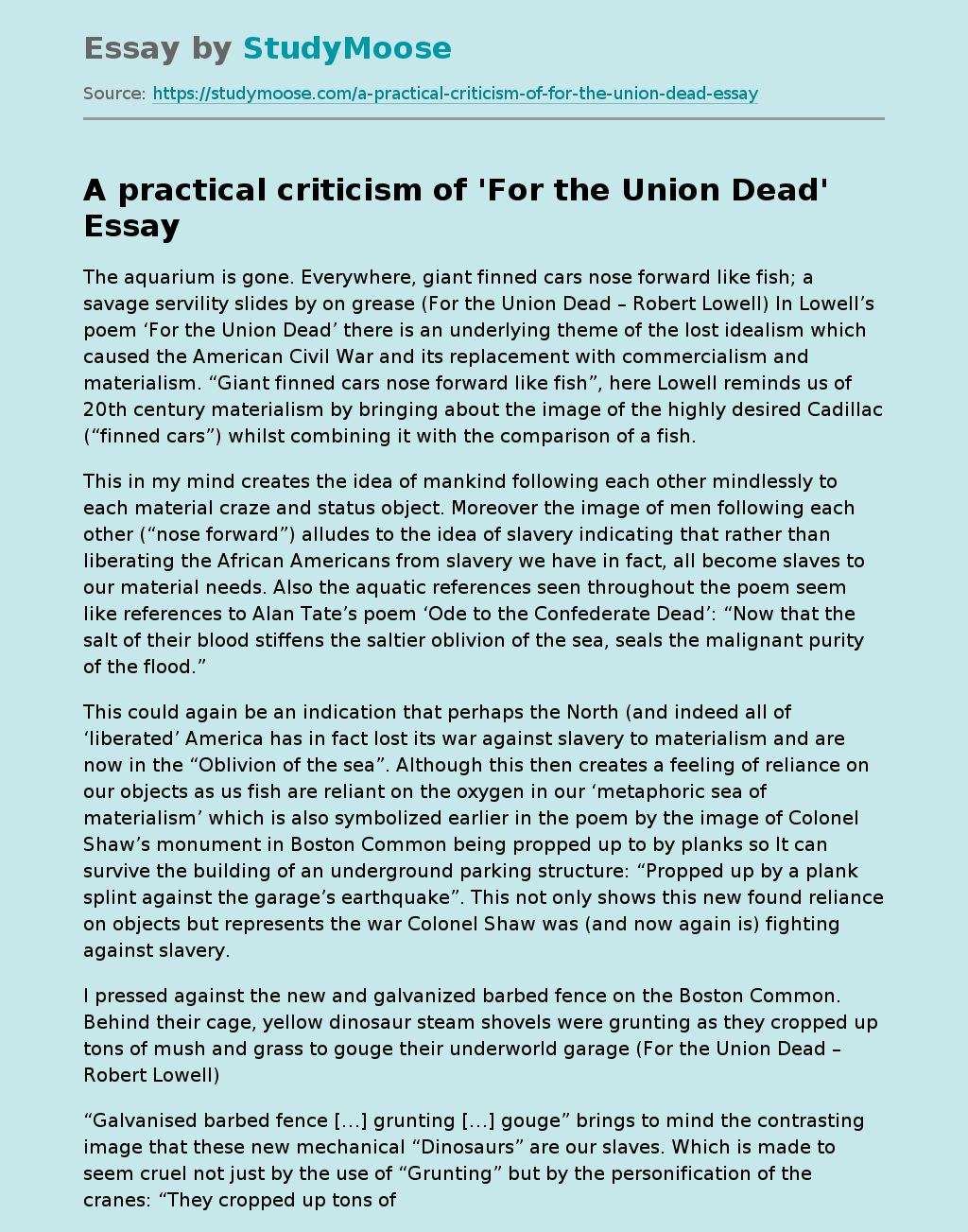