The topic of sex is a very controversial matter especially among teenagers. Teenagers are at a point in their lives where hormones are at a high and they feel the need to indulge in sexual activities. Therefore it is important that teenagers understand the importance of safe sex and the consequences of unprotected sex.

There are many factors affecting Jamaican high school students as they increasingly participate in unprotected sexual acts and as such condoms should be distributed as they help to reduce these factors; mainly the high teen pregnancy rate, the high STD/STI rate and also the ineffectiveness of abstinence.

Don't use plagiarized sources. Get your custom essay on
“ Condoms should be distributed in schools: agree or disagree ”
Get custom paper
NEW! smart matching with writer

The first major factor faced by high school students is teenage pregnancy. According to (Guttmacher Institute, 2010), teenagers (aged 15–19) who do not use a contraceptive during sex are twice as likely to become teen mothers; this has become the newest trend among teenage girls.

Some say no because of the perception of encouraging teenagers to have sex, but I oppose that opinion and think they should be distributed in schools because unprotected sex risks young lives.

The rate at which teenagers are getting A.I.D.S is increasing and for most, sex is experienced for the first time at an early age. Most teenagers do not take adequate precautions, thus they are risking unplanned pregnancies and also increasing the potential of contracting A.I.D.S, and other Sexually Transmitted Diseases (S.T.D.’s).

Some people may also think that carrying out the decision of distributing condoms may change the minds of levelheaded, intelligent students.

However, this has no effect on those who get good grades, as they are more reluctant to have sexual relations since they are focused and determined to have a good future. This also leads us to the cliché that ambition is the best form of contraception.

It has also been noticed among health authorities that there is a significant rise in teenage pregnancies, according to (Watson, 2011) from the Jamaican Gleaner; adolescent pregnancy continues to be a major public-health challenge in Jamaica, approximately 18 per cent of children born in Jamaica are attributed to adolescent girls and as such condoms should be distributed in schools as a counter measure. Watson also stated that more than 60 of every 100 pregnancies (66.2 percent) among adolescent girls in the age group 15-19 years were unplanned in 2008.

As a result of these findings it can clearly be seen that there is a need for condoms to be distributed in schools to help reduce/ control the teenage pregnancy rate. The second major factor is sexually transmitted diseases commonly known as STD’s. According to (Hirsch, L, MD, 2010) STD’s have become increasingly common among teens. It is well known that latex condoms are the only form of birth control that reduces the risk of contracting a STD, and must be used every time.

The Centers for Disease Control and Prevention in 2012 supports this by stating that the correct and consistent use of male latex condoms can reduce the risk of STD transmission, including HIV infection. As a result of this, condoms should be made readily available to students. A study done by (Horn & Keough, 2012) reported that 12 million cases of sexually transmitted diseases occur each year, 3 million (or 25 percent) are among teenagers about 13 percent of youth ages 13 to 19 contract a STD each year; this is a very high percentage of teenagers, if condoms were to be distributed there would be a significant decrease.

Another major factor is the increasing ineffectiveness of abstinence programs. Students have begun to neglect this message as they explore their sexuality. According to (Toledo, 2011) schools using abstinence-only sex education programs have significantly higher teenage pregnancy and birth rates than schools with more comprehensive sex education programs. Supporting this is (Douglas, 2008) who states studies show that most abstinence programs did not delay initiation of sex and only 3 of 9 had any significant positive effects on any sexual behaviour.

It has been published in ‘The Gleaner’ that teenagers are being denied access to condoms by clinics, pharmacies and guidance counsellors. This should not be so, as guidance counsellors should never be judgemental, but give advice, talk to students about sexual issues and be trustworthy as well. Turning away teenagers or depriving them of condoms prevents them from making the correct choices, as it is the amount of information and help we offer that leads them to the right choice.

So, condoms should be distributed in schools, but distributed with a message. It is important that all teenagers receive responsible education about sex and relationships, as they need to be aware of the risks they are taking and how to avoid them.

If we cannot convince students to abstain from sexual activities, we should promote safe sex in schools by distributing condoms. An article written by (Stepp, 2007) supports this by stating that a study authorized by Congress in the United States of America in 1997 following 2000 children from elementary or middle school to high school concluded that abstinence-only sex education does not keep teenagers from having sex. Some may argue that condoms should not be distributed in high schools because they promote sexual activities and also due to the fact that schools are institutions of education.

According to (Cullinan, 2004), there will be a problem if teachers distribute condoms, as they will be seen to be promoting sexual activity. Cullinan futher states that education is about providing information; we can provide the information about condoms and where to get them, but they should not be distributed in schools. However, I believe that providing information is not enough, it is better that condoms are easily available to students.

Condoms do not promote sexual activity, they just provide protection; (Quigle, 2003) states that condom availability was not associated with greater sexual activity among adolescents but was associated with greater condom use among those who were already sexually active. Supporting this is (Fisher, 2011) who states that paediatric studies show the availability of condoms does not increase sexual activity but can decrease unintended pregnancy, sexually transmitted diseases and HIV.

In conclusion, I believe that distributing condoms in high school is a great first step as there are many factors affecting Jamaican high school students as they increasingly participate in unprotected sexual acts and as such condoms should be distributed as they help to reduce these factors; mainly the high teen pregnancy rate, the high STD/STI rate and also the ineffectiveness of abstinence.

Condoms should be distributed in schools: agree or disagree. (2016, Apr 23). Retrieved from https://studymoose.com/condoms-should-be-distributed-in-schools-agree-or-disagree-essay 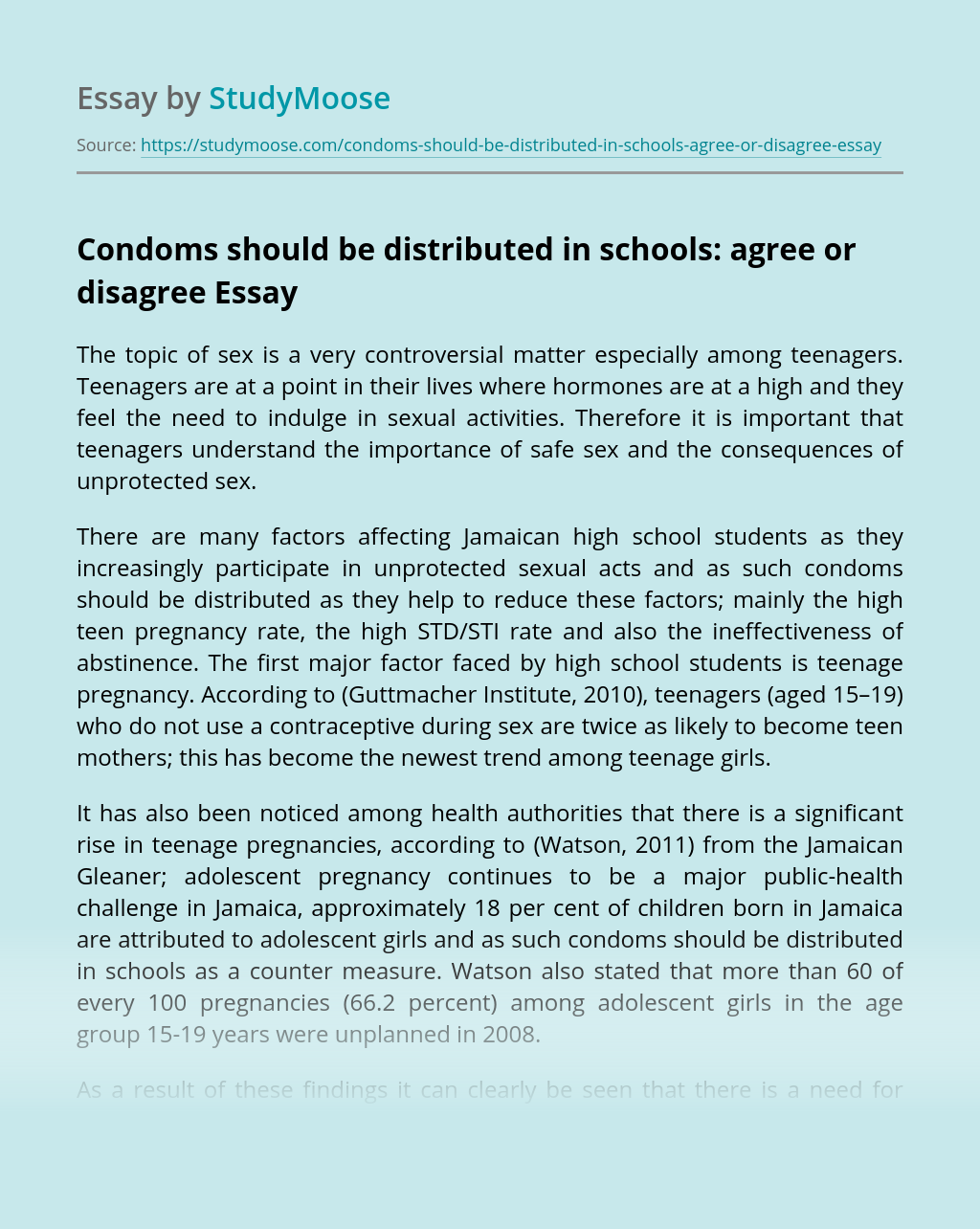