Every year, when summer begins to wind down and the children are getting ready to go back to school, football season is ready to ignite. The NFL professionals have been practicing for a little while now and the high schools and youth leagues are ready to suit up as well. Football in some families is considered a passage to life for many boys. Many players step onto the field with all of their protective gear, never even considering how dangerous the sport really is.

Turn in your highest-quality paper
Get a qualified writer to help you with
“ Concussions and Football ”
Get high-quality paper
NEW! AI matching with writer

What it is to medicals professionals and some parents is a concern for recurring concussions and lingering brain damage.

The sport of football is beginning at younger and younger ages, as young as four years old. Proud fathers, and mothers too, sign their boys up to learn how to be tough. There are other things the children learn, like discipline and how to be a team player. But mainly these football players learn how to take a hit and keep it moving no matter how bad it hurts.

As a result of these hard, competitive, blood thirsty hits, concussions do occur. A concussion is an injury to a soft structure, especially the brain, produced by a violent blow or impact and followed by a temporary, sometimes prolonged, loss of function. A concussion of the brain results in transient loss of consciousness or memory (Houghton).

The most frightening thing about concussions is they do not always follow with side recognizable effects. And when players do have only slight indications of a concussion, the players will ignore signs and go right back into the game.

The need to keep playing is the only thing on their minds, not the long term consequences. It is recorded that “high school football players alone suffer from 43,000 to 67,000 concussions per year,… true incidence is likely higher, more than 50% of concussed athletes are suspected of failing to not report their symptoms” (Gregory). Professional and amateur players of all ages may not see the consequences immediately but the long term effects can be life altering, serious enough to cause one to take their own life. There is still a lot to be learned of head injuries and concussions.

Former NFL players are now donating their brains to be examined for research. A reoccurring diagnosis in the brains of these former football players, professional and amateur is CTE, Chronic Traumatic Encephalopathy. This decease is identified as a protein called Tau which can form on several different locations on the brain. The protein build-up damages the neurons. As an effect of these damaged neurons, there are “Common symptoms for CTE [that] include sudden memory loss, paranoia, insomnia, and depression during middle age” (Gregory).

A combination of these symptoms are causing well know stars to comment suicide, Junior Seau, legendary linebacker and Dave Duerson from the Chicago Bears. The more upsetting part of CTE is that it is a disease that can only be clinically diagnosed after death. Those suffering this condition it is too little way too late. It is not that football has changed to be more violent but the sizes of the players have made the impacts more forceful. Along with the teamwork, the players learn how to use their bodies as weapons and deliver the hits that cripple their opponents. The intended reaction is to cause them to fall down to the ground. The harder, more dramatic the hit, the more praise and recognition the player and team will receive. To fight off the forceful hit, most players prepare for the collision by curling themselves over the ball, to make sure they do not fumble.

As a result of protecting the ball their head becomes in the direct line for the impact with the other player. A preliminary study conducted by helmet maker, Riddell, shows that 61% of game concussions results from helmet-to-helmet hits (Vergano). When deciding to become a football player there was an obvious concern for player’s knees and shoulders but now the attention is being placed on the injuries that you cannot always see, brain injuries. This is where the rules of the game are beginning to be change. A starting step in the right direction is players are already receiving penalties for direct helmet hits. There is still room for more safety precaution rules. Gregory suggest, “ditch the three-point stance for lineman, except perhaps for very-short-yardage situations” and “starting lineman upright in a two-point stance—feet, no hands on the ground—would result in more blocking with the arms and hands”. Some little league divisions have already begun to adapt this practice.

In addition, current studies are also showing that the multiple low impact hits can cause as much damage over time similarly to that of a forceful hit to the head. So changing the rules to the game is not the only place changes need to be made. A focus on improving safety equipment is extremely important as well, mainly the helmets. “A company, Xenith, markets a model with shock absorbers within the helmet… [to] soften the impact to the head… [Xenith] surveyed 540 players using the helmet and found reports of only three concussions” (Geregory). If the helmet could be proven, by an outside source, to greatly decrease the amount of concussion to our football players, than this uniquely designed helmet is a product that would be worth the NFL and leagues everywhere to invest money on.

To require more changes to the game of football regarding head injuries, there needs to be more awareness spread. Anyone interested in signing their child up to play or wanting to sign themselves up to play, should become educated on the potential effects of concussions to the brain. The more aware the parents/participants are of potential long or even short term effect, they will want rules put in to action to keep their children/themselves safer. The game of football to many players will be no more than a fun past time they partook in during their adolescent years, making it not worth damaging your brain over in the long run.

Concussions and Football. (2016, May 08). Retrieved from https://studymoose.com/concussions-and-football-2-essay 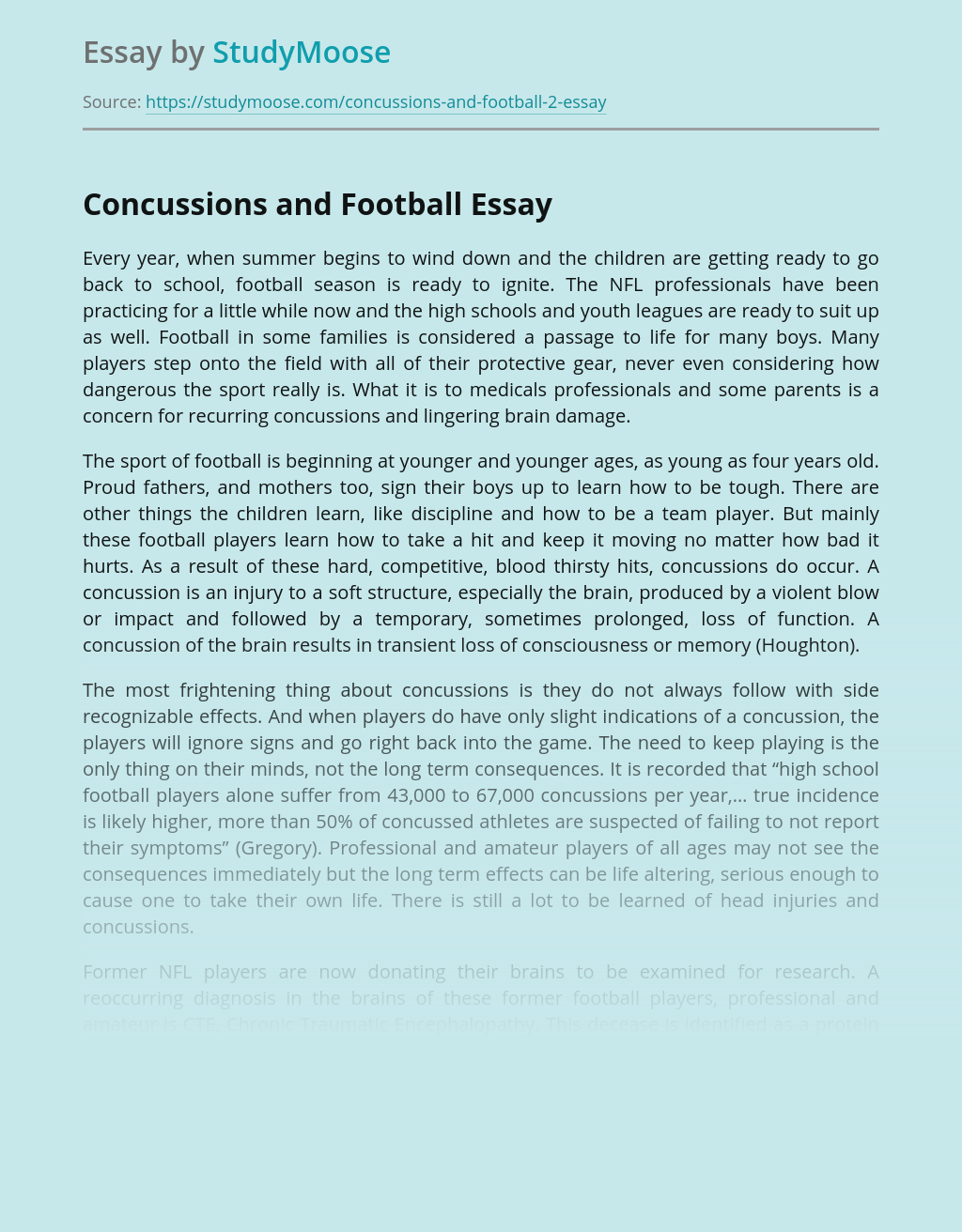 Turn in your highest-quality paper
Get a qualified writer to help you with
“ Concussions and Football ”
Get high-quality paper
Helping students since 2015
Stay Safe, Stay Original