In the first chapter of Great Expectations, Dickens uses first person narrative to present a retrospective account of the narrator’s formative experiences. The narrator has obviously matured and learnt much since his days as a young boy, and he recounts his innocent imagination with some humour and disdain: “My first fancies regarding what they were like, were unreasonably derived from their tombstones.” Here Dickens uses authorial control to present a pitiful account of a lonely, orphaned boy; “and that Philip Pirrip, late of the parish, and also Georgiana wife of the above, were dead and buried.

Don't use plagiarized sources. Get your custom essay on
“ Comparison of the first chapters of Pride and Prejudice and Great Expectations ”
Get custom paper
NEW! smart matching with writer

” And the fact that he mentions his parents death in the second paragraph shows just how significantly this has affected the young boy’s life.

In Pride and Prejudice, Jane Austen also uses authorial control to immediately inform the reader of the central theme of the book, and establish a humorous, ironic tone. This is done through the famous first line: “It is a truth universally acknowledged, that a single man in possession of a good fortune must be in want of a wife.

” but unlike Dicken’s first person narration, Austen separates herself completely from the mind and viewpoint of the characters, using dialogue to show her contempt for the social expectation of marriage: “‘Oh! Single, my dear to be sure! A single man of large fortune; four or five thousand a year. What a fine thing for our girls!'” Austen presents Mrs Bennet as a personification of the first sentence of the book, and uses humour and irony to satirise and mock her.

Another comparison between the two first chapters is that Dickens is very descriptive in his opening paragraphs: “Ours was the marsh country, down by the river, within, as the river wound, twenty miles at sea.” whereas Austen does not give any background information on the characters and where they live until the end. At the end of the chapter Austen describes Mr and Mrs Bennet: “Mr Bennet was so odd a mixture of quick parts, sarcastic humour, reserve, and caprice.” and: “Mrs Bennet was a woman of mean understanding, little information, and certain temper.” This authorial comment tells the reader exactly how to interpret the conversation they have just read, and it also presents a contrast between the two books: as Dickens uses pathos to make the reader pity Pip, Austen makes no attempt to make her central characters likeable.

Finally both authors use binary opposition to emphasize the attributes of the different characters. For example in Great Expectations, Dickens contrasts the young, innocent Pip against the old and experienced nature of the escaped convict. When Pip meets the old man he lets his fearful imagination take hold of him: “‘O! Don’t cut my throat sir,'” I plead in terror. ‘Pray don’t do it, sir.'” which shows just how little understanding of the world Pip has. In Pride and Prejudice Mr Bennet’s mildly sarcastic statements are lost on Mrs Bennet, who’s over enthusiasm makes her oblivious to Mr Bennet’s mocking tone: “Mr Bennet, how can you abuse your own children in such way? You take delight in vexing me. You have no compassion on my poor nerves.” The disparity between them is amusing, but it is also ironic, as the reader’s first view of marriage in a novel about finding marital happiness is one of a mismatched couple that cannot communicate.

Comparison of the first chapters of Pride and Prejudice and Great Expectations. (2017, Oct 30). Retrieved from https://studymoose.com/comparison-of-the-first-chapters-of-pride-and-prejudice-and-great-expectations-essay 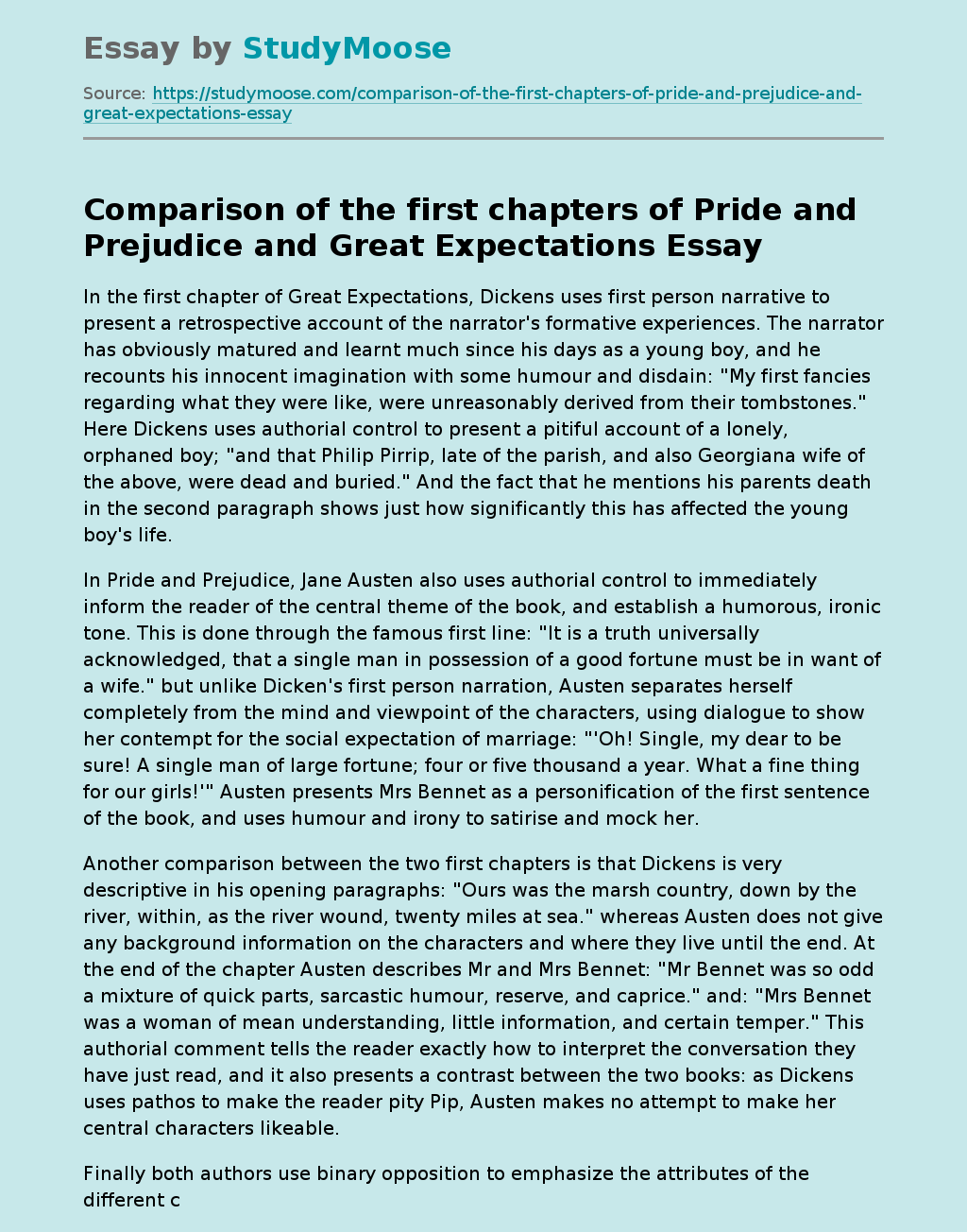