Comparing and Contrasting In the Heat of the Night

The novel, In the Heat of the Night, and the movie based on the novel, had a lot of differences and some similarities which changed the effect of the movie if you read the novel. The theme of this story is racism and was portrayed in different ways in the movie and the novel, but both had the same idea. The main conflict in both the movie and story is a murder, but they are totally different. Different people, place and victim from the story, which changes what the plot is about.

Don't use plagiarized sources. Get your custom essay on
“ Comparing and Contrasting In the Heat of the Night ”
Get custom paper
NEW! smart matching with writer

In the Heat of the Night has some big conflicts, not only dealing with racism, prejudice and stereotypes.

For example, in the novel, Chief Gillespie is tall and well built, and in the movie he is short, chubby, and always chewing gum really loudly. Another example is Virgil Tibbs, he is humble and rarely talks back in the novel, “Sam took immediate command. ‘On your feet, black boy,’ he ordered, and crossed the room in five quick steps.”(15)

But in the movie, Virgil talks back almost every single time someone talks rude to him, and he is also rude in the movie about some things.

Sam Wood and Virgil Tibbs become good friends in the novel, but in the movie Sam and Virgil don’t even become friends, but Virgil and Chief Gillespie became good friends. In the novel the victim’s name is Enrico Mantoli and in the movie he is called Cobert. “Ten minutes later, the body of Maestro Enrico Mantoli was brought in.”(24) In the movie, some characters like Duena Mantoli weren’t in it, which changed some of the conflicts and some of the scenes.

The conflicts in a novel or movie are very important because it is what makes the story interesting, and the novel and movie have pretty similar conflicts, but some aren’t even in the movie from the novel, or are completely different. The conflicts in the novel sometimes depend on the character like when Duena Mantoli made Delores Purdy look like an idiot, “Well,’ she said slowly, “he’s a real OK guy. I never got to meet him, but I heard talk. He’s got a real good job, steady, and a car, and I thought about him. I thought maybe he’d like me, especially ‘cause I heard he didn’t have no girl.’ ‘I’m his girl,’ Duena said.” (156/157)

Duena isn’t in the movie, so that scene never happened and changed the conflict. Another big difference was the setting of the novel, because in the movie they are in Sparta, Mississippi, and in the book they are located in Wells. Also, in the novel Virgil Tibbs is from Pasadena, California. “Where do you work?’ he demanded in a voice that told Sam the chief was ready to go home and back to bed. ‘In Pasadena California.’”(19) But in the movie, Virgil is from Philadelphia, Pennsylvania. The setting doesn’t change the conflicts much, but it makes them in a different place, and could make a big difference in the novel and movie.

The theme of this story is racism and how people dealt with it or were treated in the 1960s. The theme is fairly important, but the theme is pretty much the same in the novel and movie, they are both about racism, but it is sometimes portrayed in different ways. For example, in the movie, Sam Wood is always racist towards Tibbs, and in the book Sam lightens up towards the end, and isn’t as racist to him at all. “Ralph looked quickly at his guest and then back at Tibbs. ‘You can’t come in here, you know that. Go back outside. When those gentleman get through maybe one of them will bring a carton out to you.’ ‘I will,’ Sam offered.” (167) That quote shows the racism in the 1960s and how Sam lightens up to Virgil in the novel and not the movie.

In conclusion, the characters, conflict, setting and theme all have different parts and meanings in the movie than the novel. The characters are the strongest difference from the story and the movie, and go with the conflicts, setting, and theme. In the Heat of the Night has plenty of differences between the movie and novel that change the storyline a bit because of the different setting, characters, but it mostly changes by conflicts. The theme was the element of the story that remained the same, or very similar for that matter. In conclusion, the novel, In the Heat of the Night, and the movie, are very different, and only have a few similaries.

Comparing and Contrasting In the Heat of the Night. (2016, Nov 12). Retrieved from https://studymoose.com/comparing-and-contrasting-in-the-heat-of-the-night-essay 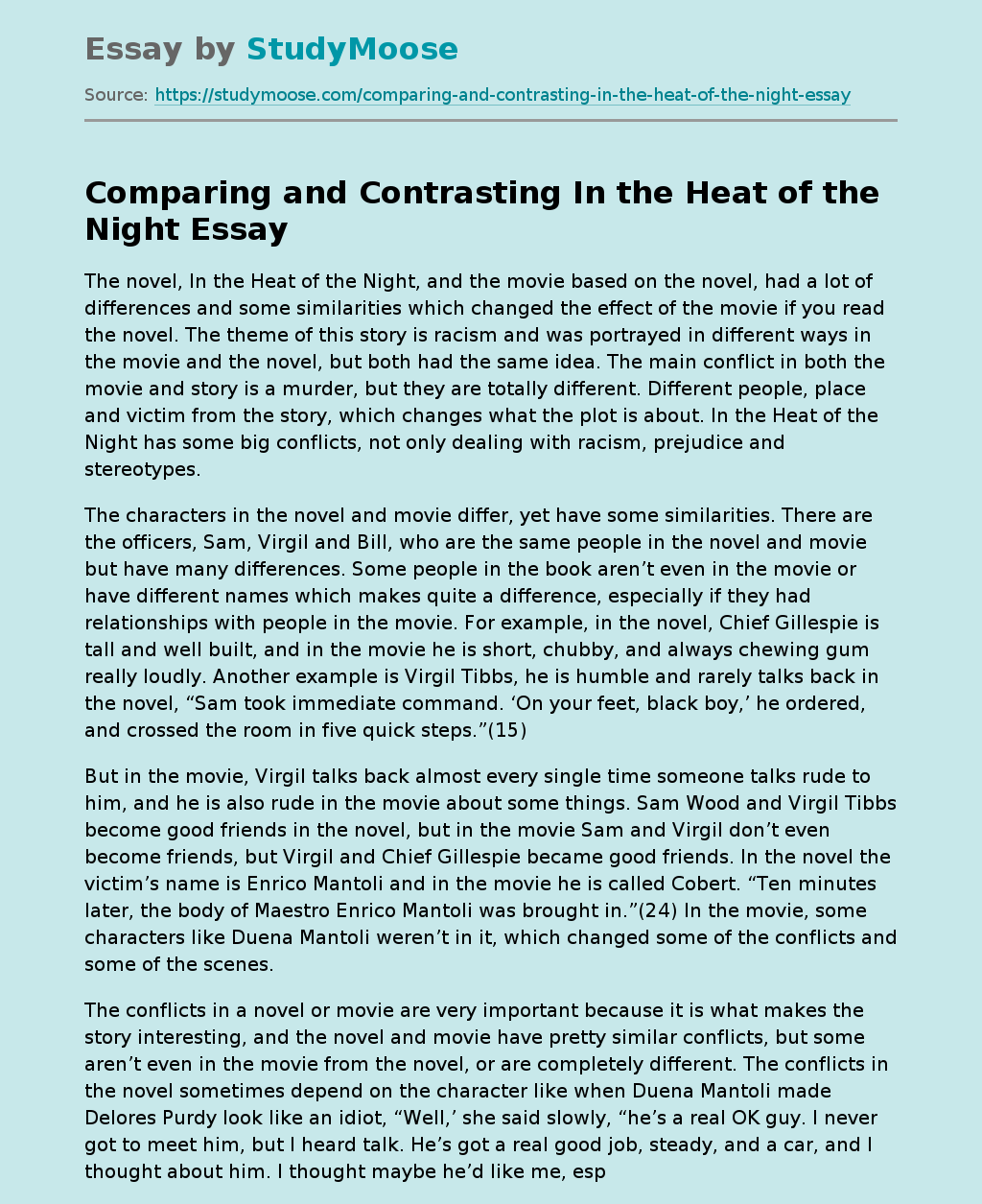