In The Heat Of The Night

Choose a character from To Kill a Mockingbird, to write about. Here are some suggestions:

**Note…. All examples from In the Heat of the Night.

Then, try to narrow down your search to THREE good traits.

In your outline, explain, reference, and analyze each of the traits from your brainstorming.

Don't use plagiarized sources. Get your custom essay on
“ In The Heat Of The Night ”
Get custom paper
NEW! smart matching with writer

You must use direct references from the text (quotations).

Grab the reader’s attention with a solid opening:
•Ask a question
•Use a good historical or literary quote
•Make a bold statement

Discuss what the story is about and give a bit of the plot.

Introduces the character (write as if the reader has not read the novel):
•Position in the story
•Related to whom or friends with whom or enemy of whom
•Protagonist/antagonist
•Importance/significance

Include a thesis statement which states the 3 traits you chose for you character.

Albert Einstein once said, “You have to learn the rules of the game. And then you have to play better than anyone else.” Virgil Tibbs, the protagonist in the novel, In the Heat of the Night, by John Ball, must learn the rules of a small town in order to be heard and survive.

The plot of In the Heat of the Night revolves around the murder of a well-known maestro in a small southern town, and also includes the many underlying human conflicts between the two main characters. Tibbs, a black investigator from California, and his relationship with the small town’s residents, including Sherriff Bill Gillespie and police office Sam Wood, create a subplot that becomes essential to the development of the story. The clash of ethnicity, personality and method of investigation becomes the essence of the story and creates an intense level of interest that compels the reader from beginning to end. It is through this intensity that Tibbs’s personality as a determined, intelligent, and compassionate person shines through.

For EACH Body Paragraph, you are going to carefully describe how each trait suits the character. Be aware that the order of the traits is critical. All of your traits should be strong, but you want to end your essay with the strongest. In addition, you may find that your traits seem to follow the story chronologically. If so, then, you want to discuss the traits chronologically.

Each body paragraph should looks like a SERAERAC paragraph. That means you will have two reasons to support each trait.

Don’t forget to introduce new characters. Don’t just mention a character and expect the reader to know who you are talking about.

From the moment Virgil Tibbs sets foot on soil of Wells, South Carolina, he shows his determined personality. After Bill Gillespie discovers the murder of Maestro Mantoli, he happens to stumble across Tibbs who is sitting at a train station waiting to catch a train and return home to California. At this point, both Sam Wood and the reader are unaware of Tibbs’s occupation as a police investigator. All we know is he is a “negro” and completely out of place in the predominantly white, racist town of Wells. But that does not stop him from being determined to prove his innocence to Gillespie back at the police department: “Where did you get all this dough?” [Gillespie] demanded, and rose just enough from the seat of his chair so that the prisoner could see his size. “I earned it,” [Tibbs] replied.

“And what do you do in Pasadena, California, that makes you money like that?” The prisoner took the barest moment before he replied.
“I’m a police officer,” he said. (19)

In this particular scene, Tibbs does not show Gillespie or Sam any insincerity. He cuts right to the chase. A little later in the novel, he shows just how determined he is when he is resolved to find out who killed Maestro Mantoli. When Harvey Oberst, a 19-year-old man initially jailed for the murder because an officer found him with Mantoli’s wallet, is brought in, Tibbs is determined to convince Gillespie he has the wrong man because he analyzed the murder scene in detail and can decisively draw a conclusion:

“How much more do you want?” Gillespie asked, his voice somewhat closer to a normal level for a change. “It eliminates the superficial motive,” Tibbs replied, “it means digging a little deeper. I expected it, but it is an advantage to see it confirmed.” “…Don’t tell me you bought [Oberst’s] story. I thought you were supposed to be a hotshot cop…” “He’s innocent of the murder…”. (34)

Unlike the officers around him, Tibbs digs deep to find the true meaning. Even when Tibbs is scrutinized by men like Gillespie, he refuses to back down, showing the importance of having a determined personality.

Sum up your ideas and say something poignant!

Explain how the traits make the character admirable or detestable. Should we strive to be like him/her?

Double space your work. Use 12 point, Times New Roman. Indent each paragraph. Do not leave an extra space between paragraphs. Have someone edit your work. 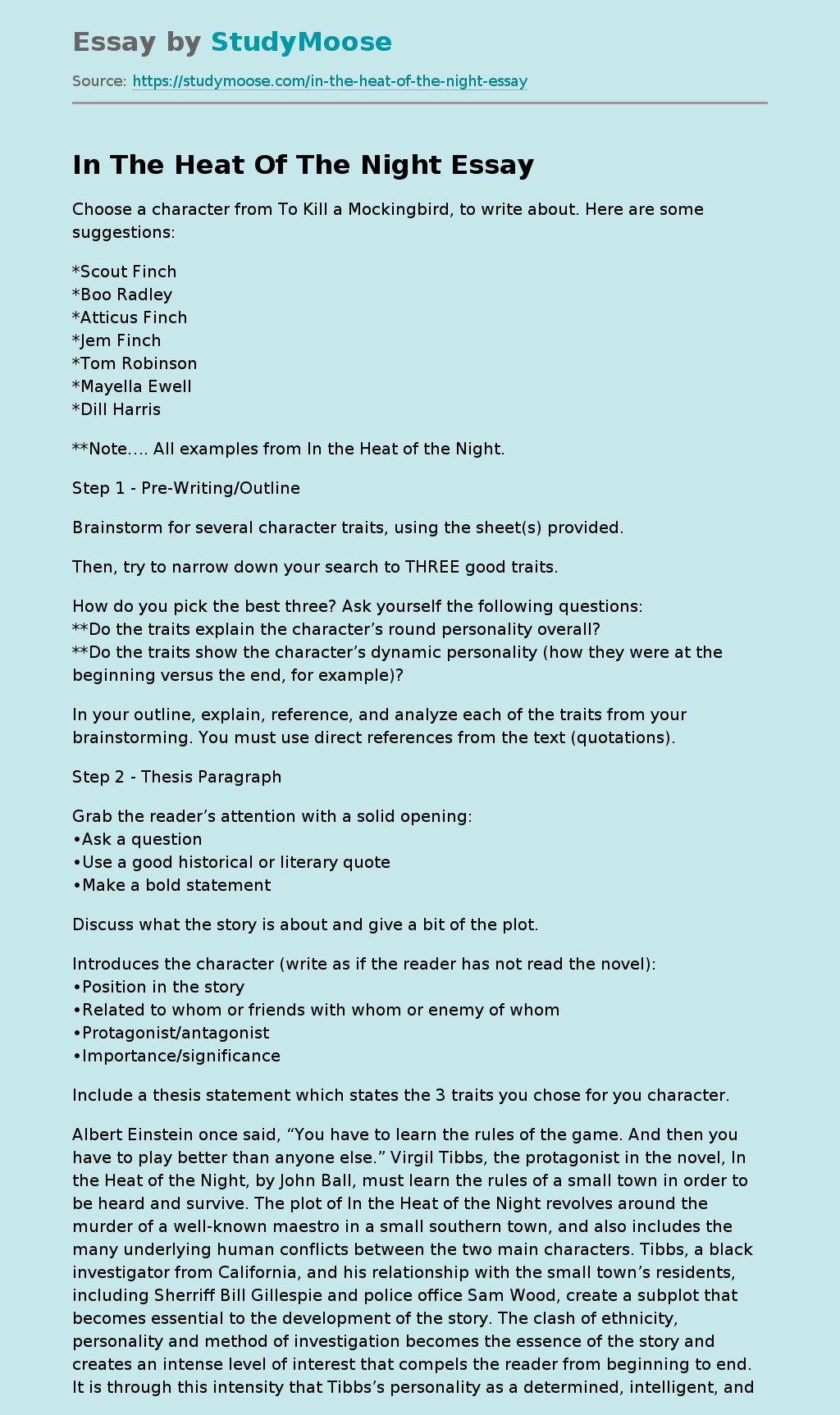