Anti-slavery individuals who believed that the government should grant western lands to settlers free of charge founded the Republican Party in the 1850’s. The first official meeting was held on July 6, 1854 in Jackson, Michigan. The republicans became a national party in 1856. Abraham Lincoln was the first republican president. A few credits to the republican party include: the signing of the emancipation proclamation by President Lincoln, the 13th amendment which outlawed slavery, the 14th amendment which Guaranteed rights Privileges and Immunities of Citizenship, Due Process and Equal Protection, and the 15th amendment which gave all citizens the right to vote no matter what color, race or indifference they might have.

Don't use plagiarized sources. Get your custom essay on
“ Compare/Contrast essay on Republicans and Democrats ”
Get custom paper
NEW! smart matching with writer

In 1917, a Republican from Montana named Jeanette Rankin was the first woman elected to congress.

Many significant Republican presidents served our nation with great leadership and integrity these include Abraham Lincoln, Ulysses Grant, Herbert Hoover and Dwight D. Eisenhower. Between those men we ended slavery, war and depression to bring our country into a great civilization where every man, woman and child is free to achieve the hopes and dreams as they please.

In 1792, Thomas Jefferson founded the Democratic Party. It was formed as a congressional caucus to fight for the Bill of Rights and against the Federalist Party.

Thomas Jefferson was the first democratic President elected to office. There is a lot to be said about the past leaders of the Democratic Party, the first word that comes to my mind is dreamers. There were great strides taken for our country when democrats were in office. Roosevelt ended the depression, brought water to California and saved many of countless farms in the Midwest.

Truman integrated the military and helped to reconstruct Europe by establishing the North Atlantic Treaty Organization. And in the 1960’s President Kennedy created the Peace Corps, banned atmospheric testing of nuclear weapons and spoke these famous words whose echo still resonates in the ears of many Americans “ask not what your country can do for you–ask what you can do for your country.” And finally, President Clinton who reduced unemployment, lowered the crime rate and reduced the national debt significantly.

The former Chairman of the Democratic party Ron Brown once said,” The common thread of Democratic history, from Thomas Jefferson to Bill Clinton, has been an abiding faith in the judgment of hardworking American families, and a commitment to helping the excluded, the disenfranchised and the poor strengthen our nation by earning themselves a piece of the American Dream. We remember that this great land was sculpted by immigrants and slaves, their children and grandchildren.” In my opinion, no truer words have ever been spoken about the principles of the Democratic Party.

There are many differences between republicans and democrats. Republicans are known as the conservatives and democrats are known as the progressives or liberals. Democrats believe that tax cuts should go to working families to increase their purchasing power, which in turn increases the economy. Republicans believe that tax cuts should go to the wealthy so they can invest more. Through all the studying and research, that I did there is one sentence that sums up everything “democrats are for the working man and republicans are for the businessman”.

Since doing this essay, it has enlightened me on the vast differences between each party. I did not know a lot of the information that I read about and I enjoyed it immensely. I have a newfound respect for each of the parties. It took a lot of hard work and ingenuity to break from England and start this great country of ours, and it takes a lot more to keep it going year-by-year and decade by decade. I am very proud to be an American and can only hope to do half of what our Founding Fathers have done for us.

Compare/Contrast essay on Republicans and Democrats. (2016, Jul 27). Retrieved from https://studymoose.com/comparecontrast-essay-on-republicans-and-democrats-essay 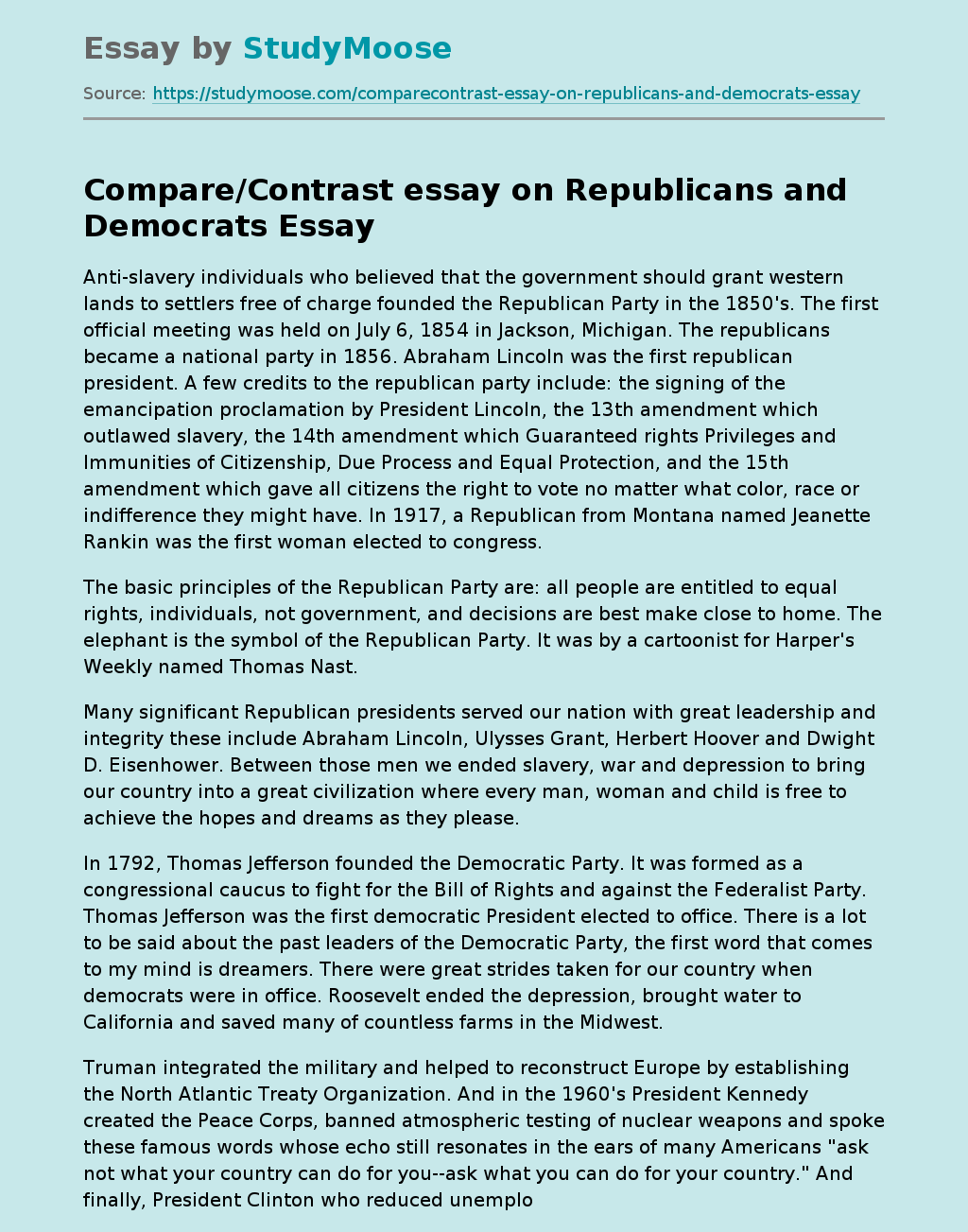