Subjective agreement by two parties to make a contract

Consensus is a subjective agreement by two parties to make a contract. Improperly consensus is when a contract has been obtained in a manner in which in the eyes of the law is improper. This contract is regarded as voidable meaning that one of the parties who is innocent has a choice whether or not to have the contract declared void. If the innocent party chooses to uphold the contract it is entirely valid and may be enforced like any other contract.

Turn in your highest-quality paper
Get a qualified writer to help you with
“ Subjective agreement by two parties to make a contract ”
Get high-quality paper
NEW! AI matching with writer

The agreement is a valid one provided that the other elements necessary to constitute a contract are present. However since the contract has been obtained by improper means it is voidable at the instance of the innocent party.

On the other hand absence of consensus means that there is lack of subjective consensus or parties to a contract are in disagreement. Mistake is an element that shows that indeed there was a dissensus. It is a situation where a contracting party acts while under an incorrect impression regarding some other fact that relates to and affects the contract between the parties. Firstly l shall deal with contracts obtained by improper means and these contracts are considered to be voidable. Voidable contracts are contracts which on the face of it meet all the essential requirements of a valid contract but the agreement of one of the parties to the contract would have been induced by an impropriety attributable to one of the parties to the agreement.

There are specific categories of improperly obtained consensus which are misrepresentation,duress and undue influence. Misrepresentation is a pre-contractual statement or conduct which creates a false impression in the mind of a contractual party and which influences her decision to contract. It can also be defined as a form of misstatement whereas misstatement is an assertation that does not accord with true facts.

Donners Motors then refused to make repairs and Kufinya sued on grounds that the agreement had been induced by a misrepresentation. Duress refers to all forms of threats calculated to coerce, compel or intimidate a party into entering into a contract desired by the one who threatens her. A party who gives his or her consent to a contract under duress does so not through the free exercise of his/her own will but through fear inspired by an illegitimate threat. A contract induced by duress is valid since in the eyes of the law, a forced consent is none the less an effective consent. However the contract is voidable at the option of the threatened party because the consent was obtained by improper means. For an innocent party to cancel a contract on grounds of duress the following elements must be established; i)Actual violence or reasonable fear

The fear must be caused by the threat of some considerable evil to the party of his family iii)It must be threat of an imminent or inevitable evil iv)The threat or intimidation must be contra bonos mores v)The moral pressure used must have caused damage.

Aspects of duress were extensively discussed in a leading case of Broodryk v Smuts . Broodryk an employee of the state was persuaded to enlist in the
armed forces by the government officials who threatened otherwise to have him imprisoned or interned and failing such an enlistment he will be regarded as a person unwilling to support the government. He claimed rescission on the basis of duress and the court ruled in his favour saying even where a principal (in this case government) has neither authorized nor been aware of the acts attributed to his agent, such principal nevertheless, will not be entitled to hold the other party to a contract which was obtained by the duress of the agent. Undue influence is a form of improper pressure brought to bear upon a person in order to induce him/her to enter into a contract. It is closely related to duress since a degree of pressure is also exerted on the innocent party.

However the wrong doer does not actually threaten the innocent party, rather he abuses the relationship between the parties to influence the innocent party’s decision to contract. The impropriety in these relationships occurs when the dominant party abuses this relationship to induce the weaker dependent and trusting party to enter into a contract invariably to the benefit of the dominant party. The relationships ordinarily cited by authorities include those existing between doctor and patient, attorney and client and teacher and student.

A leading case under undue influence is that of Preller v Jordan. Jordan an elderly farmer claimed retransfer of four farms he had donated and transferred to Preller his doctor. Jordan alleged that the transaction took place when he was mentally exhausted and weak. In that condition he had fallen totally under the influence of his doctor. The doctor went on to donate some of the farms to his children and left one in his possession. The court ruled that he could only recover one farm in the hands of Preller and not the other three farms because the contract was voidable and not void ab initio. An innocent party who seeks to set aside a contract on the ground of undue influence must prove that; i)The other party obtained an influence over him/her

That this influence weakened his/her powers of resistance and rendered his/her will compliant iii)That the other party used this influence in an unscrupulous manner to persuade him/her to agree to a transaction. On the other hand absence of consensus is a result of a mistake. Mistake or error in latin is a situation where a contracting party acts while under an incorrect impression regarding some other fact that relates to and affects the contract between parties . There would be no consensus as parties or at least one of them would be laboring under a misapprehension that makes them of her believe things are what they really are not. A contract on the ground of mistake is considered void meaning that there would no contract between parties and their arrangement would be void abnitio from the beginning. There are different types of errors which are unilateral mistake, mutual mistake and common mistake. Unilateral mistake occurs where only one party is mistaken while the other party is aware of his/her mistake.

The general rule can be stated that error leads to a voidable contract when it is a unilateral mistake induced by the other party to a contract. Mutual mistake refers to the instances where both parties are mistaken about each other’s intention and are not at cross-purpose. Neither of them is aware of other’s mistake. Lastly common mistake occurs when a mistake is common to both parties, the parties would have reached an agreement but that agreement is based upon a fundamental mistaken assumption. In such a case the court may nullify the consent of the parties and set aside the contract which they concluded. Case Bulawayo city council v Mabhena the court ruled that the college’s mistake was neither reasonable nor justifiable and it was therefore bound by the contract.

The facts of the case were that the applicant was admitted to a cookery course at the Bulawayo Polytechnic College with 3 Zambian “O” levels. The college’s minimum qualifications were 5 “O” levels. The Head of the division was new to the post and accepted the applicant by mistake. The court said that before a party can realize from a mistake, the mistake had to be on the basis if unilateral mistake, the mistake had to be reasonable and justifiable and material. There are some other situations where there would be absence of consensus. These isalso Roman Law classification of errors which are error in persona, error in negotio, error in corpore and error in substantia.Error in personarelates to the identity of the person one is contracting with. It vitiates consent in instances where the identity of the counter party to the contract is material. The contract between two parties would be void on that account.

Error in negotio is generally of material nature. There would be no contract where one party genuinely believes he is entering into a contract of sale and the other party genuinely believes he is entering in a contract of lease. Error in corpore is ordinarily material and where it can be established that the error was Justus the contract is void. This is a material mistake concerning the subject matter of the contract or rather the object of the performance. An example would be where property is purchased and thee parties have completely different proprieties in mind. This would vitiate the consent to the contract. Lastly, error in substantia (error in qualitate). This is a mistake regarding an attribute or characteristic of the subject matter of the contract (object of performance) that is generally not regarded as material. Conclusion

Subjective agreement by two parties to make a contract. (2016, Apr 10). Retrieved from https://studymoose.com/subjective-agreement-by-two-parties-to-make-a-contract-essay 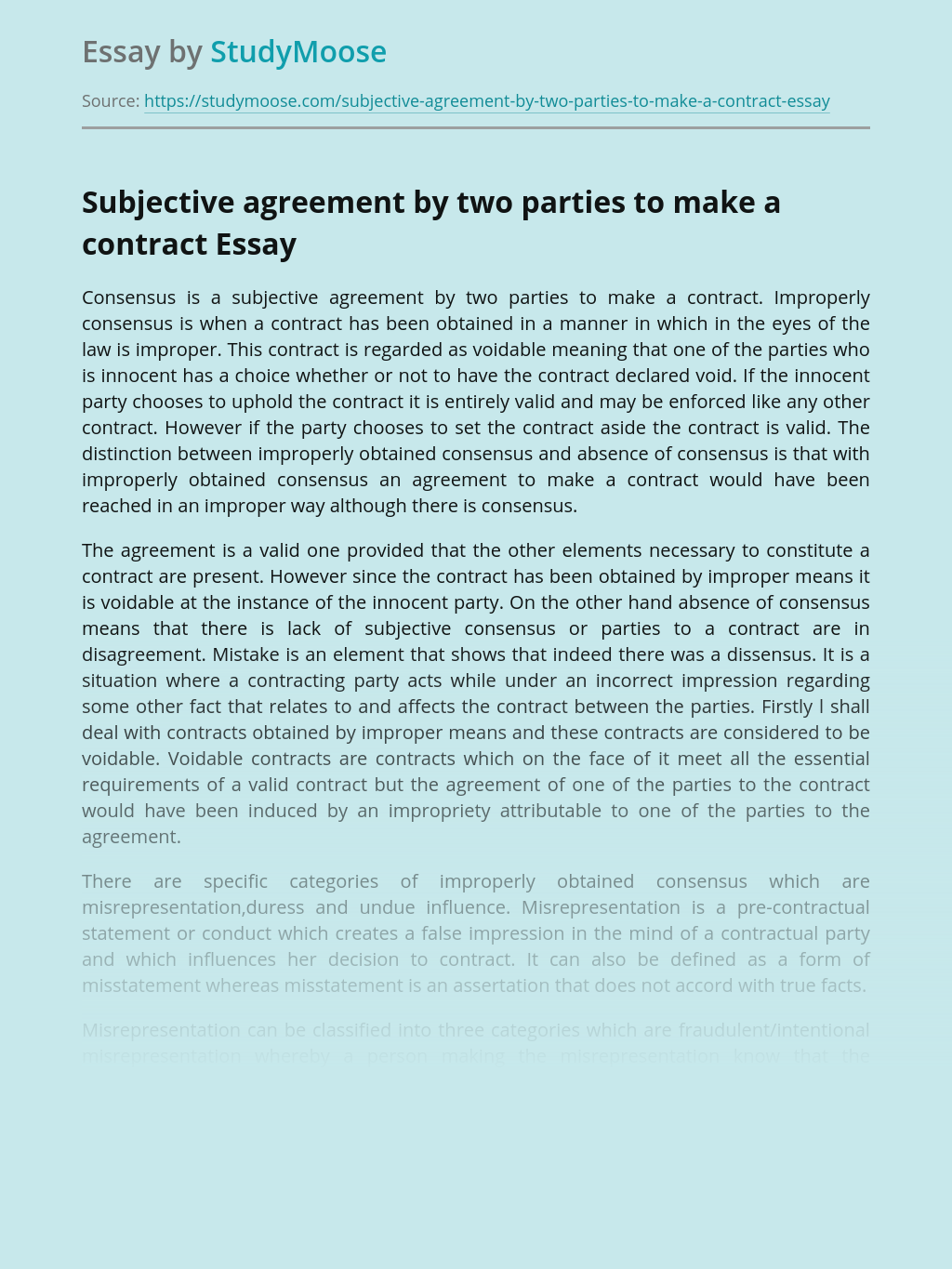 Turn in your highest-quality paper
Get a qualified writer to help you with
“ Subjective agreement by two parties to make a contract ”
Get high-quality paper
Helping students since 2015
Stay Safe, Stay Original