From looking at the facts laid out by Grab regarding the purchase of a sandwich shop, it seems that the most likely action is that of misrepresentation.

Don't use plagiarized sources. Get your custom essay on
“ Contract Law Assignment ”
Get custom paper
NEW! smart matching with writer

From the facts of the case according to Grab, it seems that he is unhappy about the purchase of the shop. There are two issues present here concerning misrepresentation. Firstly, he ‘specifically inquires’ to Dino whether Porthampton Institute (who are the shops main customers), if it was going to re-locate out of town, which was said to be rumoured. Grab refers to the statement made by Dino explaining that he had asked a neighbour, who is a senior planning official with the City Council, and assured Grab that “no move is planned”.

Once buying the shop the institute moved out of town, causing the income of the shop to be substantially reduced.

The second issue concerning misrepresentation is that of the business turnover for the previous three years. Dino explained to Grab that the shop was receiving ‘up to ,000 per year’. But after purchasing the shop Grab asked his accountant to look over the figures and found that it had only reached ,000 in the last year and was below ,000 for the previous two years.

However for Grab to have an action for misrepresentation, he must first prove that Dino’s statements were those of fact and were false. It is necessary to discover whether the statements are a misrepresentation in the legal sense. A false statement of opinion is not a misrepresentation of fact -Bisset v
Wilkinson. However, where the person giving the statement was in the position to know the true facts and it can be proved that he couldn’t reasonably have held such a view as a result, his opinion will be treated as a statement of fact. This would apply to the statement made by Dino about Porthampton institute not moving. Grab trusted Dino’s reassurance about ‘no move being planned’, because he had asked a person who looked like they were in the position to know the answer i.e. Dino’s neighbour, a senior planning official for the City Council.

In this case to the general person, it would seem that Dino’s statement about the sandwich business having a turnover of up to ,000 per year for the previous three years is a statement of opinion due to the language used. Dino states up to ,000, meaning it may come across as a statement of fact because Grab sees Dino as a person who has owned the business and run it for the last ten years, suggesting that he had some skill or knowledge of the subject matter of his statement. The case of Smith v Land and House Property Corp is an example of how the courts could view Grabs case. In this case a statement that the tenant of the house concerned was a “very reliable person” which was considered to be a statement of fact rather than a statement of opinion as “…..the opinion was being made by somebody who had the knowledge to make such a statement”, so in my opinion the courts could view Dino’s statement as a statement of fact in this context, as he had the “knowledge” to make such a statement due to his position as the owner of the sandwich business.

If the courts were going to look deeper into Grab’s case they could look at another issue concerning ‘silence’. Generally silence is not a misrepresentation. The effect of the maxim caveat emptor is that the other party has no duty to disclose problems voluntarily. Thus if one party is labouring under a misapprehension there is no duty on the other party to correct it: Smith v Hughes . However there is an exception to that rule which may help Grab. Half truths – the representor must not misleadingly tell only part of the truth, thus a statement that does not present the whole truth may be regarded as a misrepresentation as in the case of Nottingham Brick & Tile Co. v Butler .

We need to find out whether the statements made, induced Grab into signing the contract. The courts would look to four conditions laid down by a series of cases to decide whether the statement did induce the contract to be entered into by the representee. The first of these is defined by the cases of Smith v Chadwick and Museprime Properties Ltd v Adhill Properties Ltd where it was decided that the representation must be material to the subject matter of the contract. The second is that the representee must have relied on the misrepresentation. The misrepresentation has material value – the business profit margin. It can be seen adequateley important enough to influence Grab as a reasonable person.

I would advise Grab that it would be better to attempt to repudiate the contract under the doctrine of ‘negligent misrepresentation’ under the Misrepresentation Act 1967, for the statement about the turnover of the business being not exactly true. This is because s2 (1) of the act changes the burden of proof, shifting it to Dino who must now prove that he had “….reasonable grounds to believe ….and did believe the statement(s) to be true..” , if Dino cannot prove that he believed the statement to be true than he will be ‘negligent’, meaning he will be liable for damages and or rescission of the contract (subject to certain bars of rescission).

This burden can sometimes be difficult to discharge as shown in the case of Howard Marine & Dredging Co. v Ogden & Sons . I would advise Grab that the decision of the courts in the case of Howard Marine, if it was to be followed by the courts in his case, that it could be an important factor. In Howard Marine the courts said that for them to reasonably believe their statement was true they must take reasonable steps to verify this fact i.e. the manufacturer of the ship. If it is established that Dino did not have proper recordings of the business accounts, this could be a major factor in Grab’s case.

Now that damages for negligent misrepresentation may be awarded the question arises whether the representees own negligence, which has contributed to his decision to enter the contract operates to reduce proportionality to the liability of the representor. The courts may take this into account with Grab that contributory negligence is present here, because Dino offered him the chance to look over the business turnover accounts before putting in an offer to purchase. As in the case of Gran Gelato Ltd v Richcliff (group) Ltd , Sir Donald Nicholls V-C decided not to make any reduction in the damages awarded, on the ground that the defendants intended that the plaintiffs should act in reliance on the misrepresentation, so they cannot complain when liability is imposed precisely because the plaintiffs did act in the way the defendants intended .

It is clear with Grab’s case that Dino made a false statement innocently, which can be believed to be correct because he asked a senior planning official who was a neighbour of Dino. Even though the information was not completely right, it still looks reasonable enough to believe such a statement.

Overall, my advice to Grab is if he prosecutes Dino with innocent misrepresentation for the move of the Institute and negligent misrepresentation regarding the turnover of the business, the courts would look into giving Grab the right to rescission, putting him in the position before the contract was first made and also they would calculate the loss of earnings for the ten months that he was in ownership of the sandwich shop and award him with compensation. It is not definite that the courts will uphold both negligent and innocent misrepresentation but the contract between Dino and Grab will definitely become voidable as opposed to becoming void. Meaning that he will receive either rescission or damages, but that would be for the courts to decide. Overall Grab has a strong case against Dino. 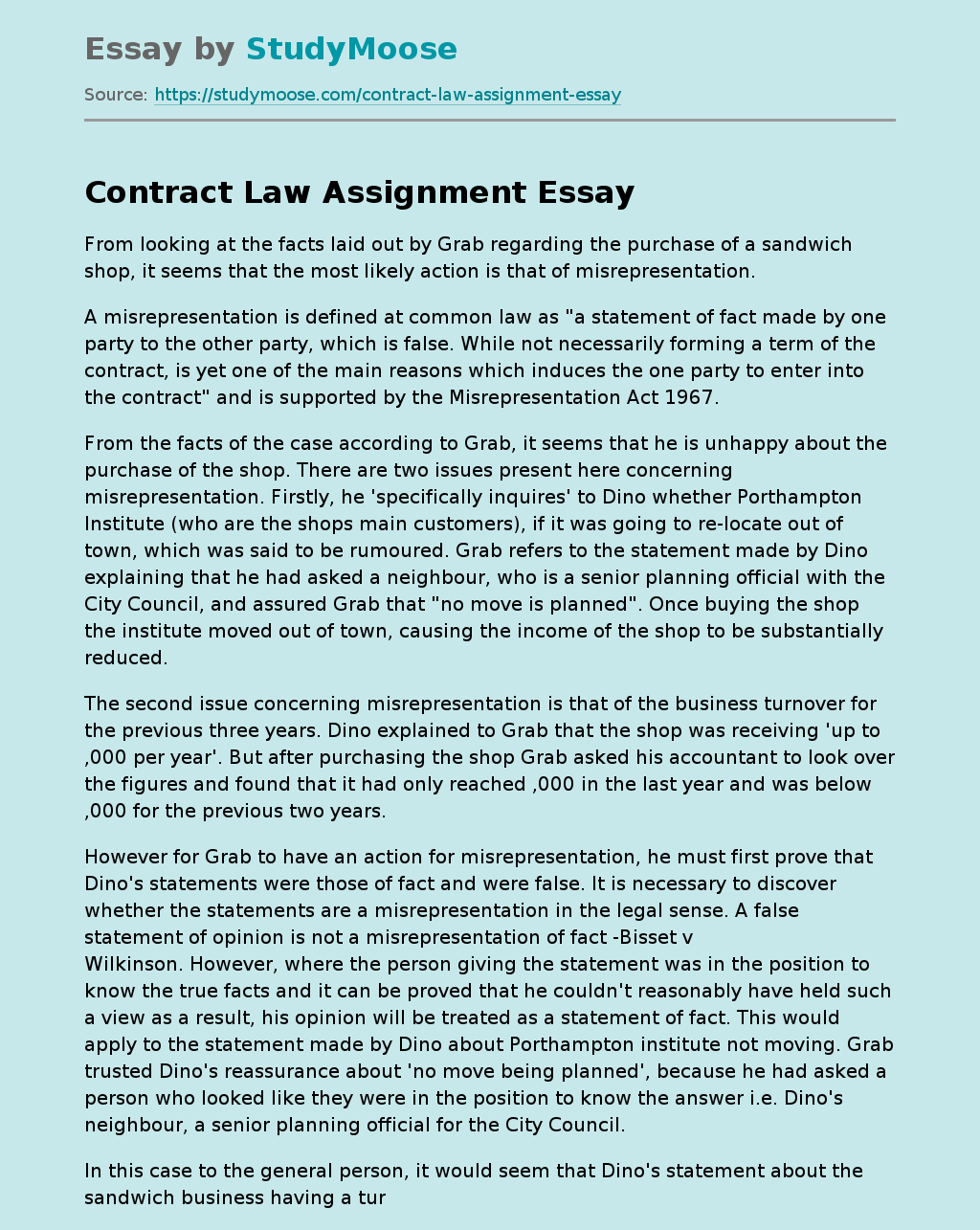