Over the past few decades, with the development of contract law, more and more people has paid attention to the exclusion clauses contained in a document which is signed by the parties. Many contracting parties use this technique to avoid liability for breach of contract. In this essay, exclusion clauses can be defined as a clause included in a contract to either limit or exclude liability of a party in breach of the agreement. (also termed exemption clauses or exemption clauses.

Don't use plagiarized sources. Get your custom essay on
“ Development of Contract Law Exclusion Clauses ”
Get custom paper
NEW! smart matching with writer

) Consequently, it is argued that whether the party will be bound by the exemption clause which is signed by the parties or not.

Therefore, this essay will analyze the exemption clause with signature based on several court cases and illustrate the effect of an unsigned exemption clause by using a short hypothetical scenario and a court case. Signed Exclusion clauses As a general rule, a person who signs a document which contains contractual terms is bound by the clause of the document.

To be specific, if a party signs a contractual document incorporating an exemption clause, it will automatically form part of the contract. Therefore, Signature can ordinarily bind a person to the terms even if he has not read or understood the terms set out in the document.

What has come to be known as the principle in L’Estrange v Graucob was expressed by Scrutton LJ as follows: ‘When a document containing contractual terms is signed, then, in the absence of fraud, or, I will add, misrepresentation, the party signing it is bound, and it is wholly immaterial whether he has read the document or not.

‘ According to the case of L’Estrange v Graucob [1934] 2 KB 394, the plaintiff bought an automatic cigarette machine from the defendants. She signed a contract called sales agreement which include several clauses, but did not read.

When she discovered the machine was defective, she tried to sue Graucob for breach of contract, but the defendant was able to rely on the exclusion clause incorporated into the written contract. From this case, it can be seen that since the plaintiff has signed the sales agreement, the contract and the exclusion clauses has taken effect. In addition, the contents of the document were represented correctly and no fraud on the part of the defendants. Therefore, L’ Estrange is bound by the exclusion clauses. However, the rule in L’ Estrange v Graucob will not apply under some circumstances.

Firstly, if the signed document could not reasonably be regarded in the circumstances as likely to contain contractual terms, the party will not be bound by the signature. In the case Le Mans Grand Prix Circuits Pty Ltd v Iliadis, the plaintiff was injured while driving a go-cart at the defendant’s racing track. P was invited there as a guest to help the promotion of D’s go-kart track and did not pay for the attendance at the track. The defendant wanted to avoid liability by relying on an agreement, signed by the plaintiff which includes an exclusion clause.

The count made a decision that the defendant was unable to rely on the exclusion clause so as to avoid liability. Because the plaintiff attended defendant’s track was not in pursuance of a commercial dealing of relationship with the defendant. Thereby, the entry form was just a driver registration form, not a contract. In other word, the document which the plaintiff had signed was not contractual, although the agreement contained plaintiff’s signature, he was not bound it because the signed document could not reasonably be regarded in the circumstances as likely to contain contractual terms.

Secondly, a person who misrepresents the clause and its effect is not allowed to rely on the exemption clause to escape liability. The case of Curtis v Chemical Cleaning and Dyeing Co clearly illustrate the legal position. In this case, Curtis took a wedding dress to the defendant’s shop to have it dry cleaned. The shop assistant asked her to sign a ‘receipt’, and the plaintiff was told by the shop assistant that the document was to exempt defendants from liability for damage to the beads and the sequins.

The plaintiff signed the document, which in fact included a clause that the company is not liable for any damage howsoever arising. The dress was stained by the defendant who later tried to rely on the exclusion clause. The Court judged that the clause is not effective and the defendant cannot rely on it. Because in this case, the exclusion clause had been misrepresented as only beads and sequins would be affected. and the plaintiff thought she was only running the risk of damage to the sequins and the beads on the dress. Unsigned exclusion clauses

In our daily life, the exemption clause also contained in some unsigned document, such as tickets, invoices, receipts, vouchers and so on. Upon most situations, these unsigned documents may not be binding in contract unless they are properly included into the contract. Although, Signature is the most common way to confirm the effectiveness of a contract, that no means if you don’t sign the form you could not be bound by it, in some particular cases it is. Firstly, a hypothetical scenario will be made to illustrate the effect of exclusion clause in an unsigned document.

Alex had toothache seriously, he went to a pharmacy and bought a box of Panadol. Before he took the tablets he saw the introduction and even the container has written on that ‘must follow the doctor’s advice, if you don’t follow the advice, there is not liable for any harm of your body’ but he didn’t care about the warning and take three tablets. On the following day, Alex felt dizzy and nausea. After the diagnosis from doctor, it can be considered that these symptom due to the effect of medicine. Then, Alex sued the medicine company.

Under this situation, the defendant can avoid liability by exemption clause even though Alex did not sign the document. As the common law said that exclusion clauses contained in unsigned documents are not valid unless a reasonable person would expect the document to contain contractual document and a reasonable notice is given. In this case, contractual terms can be expected to find from the introduction and container of the medicine. In addition, company also takes reasonable steps to bring these clauses to Alex’s notice.

Thus, the plaintiff was already bound by the exemption clauses. Another court case for the unsigned exclusion clause is the case of Parker v South Eastern Railway Co, plaintiff left his bag at cloakroom in a railway station and he got a ticket. On the front of the ticket said ‘See back’, the other side include an exclusion clause which shows that company will only be responsible for the value of package within 10 pounds. When the bag could not be found, Parker sued the company for 2410 pounds.

However the court judged that the plaintiff was bound by the exclusion clause on the ticket even though he did not sign it. Because the company has already gave the plaintiff sufficient notice of the existence of the clause and a reasonable person would expect to find these terms. According to the basic principle in contract law which said that the unsigned exemption clause will be bound if reasonable notice has been given. Conclusion To sum up, exclusion clause can be classified as signed document and unsigned document in this essay.

When considerate the effectiveness of a clause, every aspects should be analyzed. Although the signature is an important factor to prove if the clause is valid, it does not mean that all the exclusion clauses included in a signed document can be bound with a signer. To the contrary, the exemption clause in an unsigned document can also be valid in some situation. Therefore, any party who wish rely on the exemption clause to avoid liability should incorporate the clause into a contract with sufficient notice and make sure the behaviors of the party is reasonable. 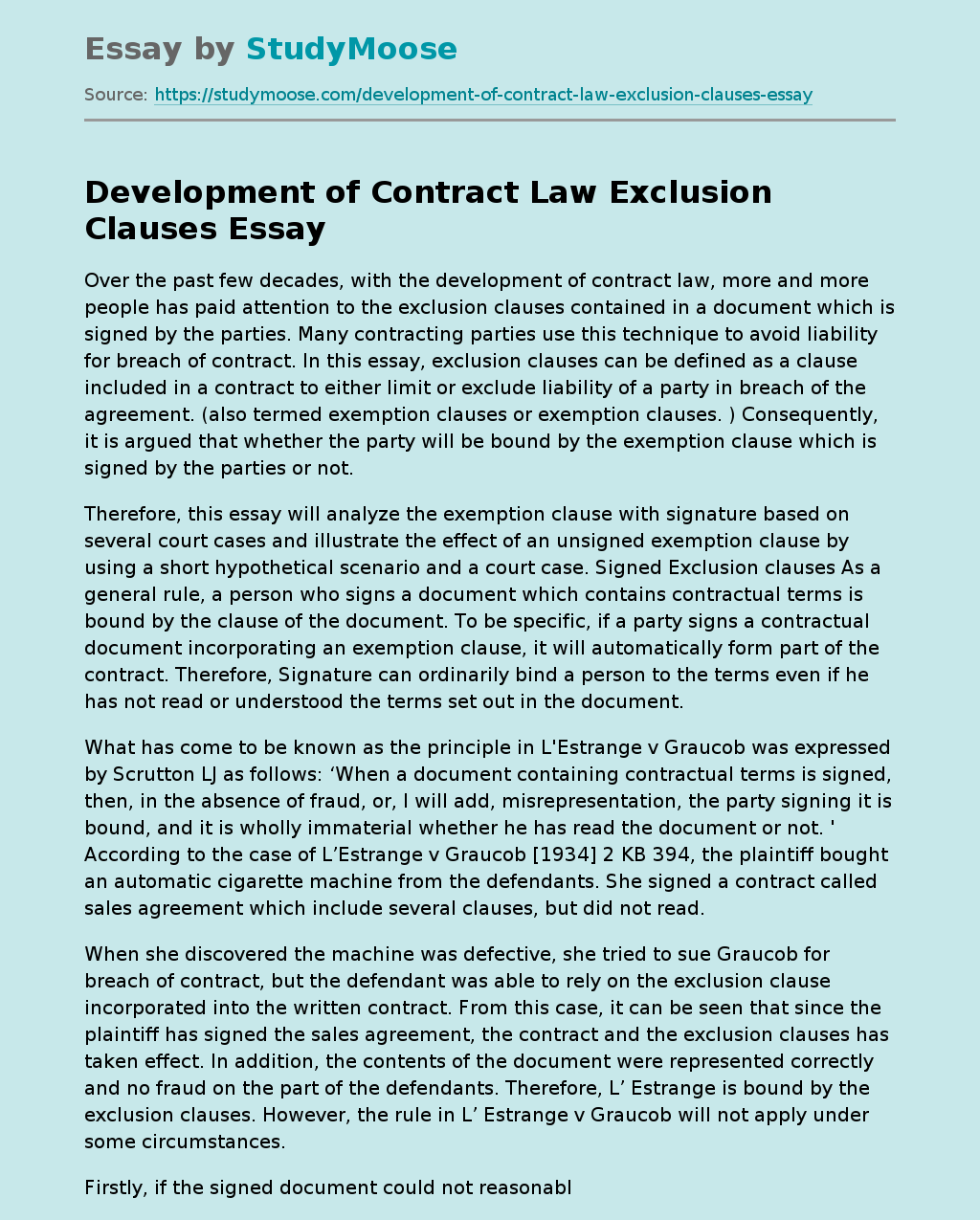