A Critical Evaluation of the Study Poverty and Social Exclusion in Britain: The Millenium Survey

This essay will critically evaluate Poverty and Social Exclusion in Britain: The Millennium Survey highlighting key concepts and methods used in the study. It will place the study within a larger context of the previous work that it built upon. Firstly it will consider the surveys attempt to measure poverty and socially perceived necessities and argue that due to both concepts being contested it may not have fully achieved it. Secondly it will consider necessities as conceived within the survey as a tool for measurement, suggesting that perhaps its use was not overly effective in ascertaining a coherent measure of poverty, deprivation and related social exclusion.

Don't use plagiarized sources. Get your custom essay on
“ A Critical Evaluation of the Study Poverty and Social Exclusion in Britain: The Millenium Survey ”
Get custom paper
NEW! smart matching with writer

Townsend (1979) in his research has shown that poverty and social exclusion are multifaceted ideas that cannot be adequately understood by looking at inequalities of income alone.

Research into how to define and measure both poverty and social exclusion has been difficult due to differing concepts of what each is and how to effectively measure them. Poverty in the United Kingdom (Townsend, 1979) along with Poor Britain Survey (Mack and Lansley, 1985) and Breadline Britain Survey of Britain (Gordon and Pantazis, 1997) are the main forerunners of the Poverty and Social Exclusion Survey: the Millennium survey. The relative deprivation method adopted by Townsend (1979) has been adapted into the consensual measurement method with respect to poverty and deprivation in the surveys mentioned above.

These surveys highlight a coherent theory consistent based measurement of poverty which allow a deeper understanding of long term dynamics of poverty and social exclusion.

One of the essential aims of the survey was to produce a measure of poverty and of socially perceived necessities. It is an aim that can be seen as difficult to achieve due to the contested nature of the concepts. Bradshaw (2001) highlighted the beneficial use of invoking multiple measures of poverty at once so as to triangulate a more coherent definition and understanding of poverty. The survey through different methods such as social consensus to can b ascertain what is a necessity. Similarly it can be seen to effectively measure poverty through use of the consensual method which encompasses those who fall within low income along with low standard of living. Secondly the income poverty method which factors in people as being poor if their income falls below a relative income poverty threshold limit and thirdly the subjective method by which people identify as people in response to questions based on different poverty definitions. This use of representative sample and population engagement through consensual method can be seen as effective in the sense that the methodology combined a representative popular basis for agreeing what are necessities, with a scientific basis for establishing a level of poverty.

At its core it is convincing because it is incorporating members of the public view along with social scientists regarding necessities and the deprivation aspect that measures poverty is based on a scientific method rather than arbitrary decision. The triangulation aspect can be considered as comprehensive but not without fault. Perhaps for the purposes of the surveys aim, Niemietz and Meadowcroft (2011) concept of consensual budget standards rather than consensual method approach would be better suited to giving a more coherent concept of poverty for use in the survey. Niemietz and Meadowcroft view of poverty measurement instead identifies a majoritarian basket of necessities’ that might be more appropriate. Niemietz proposal is similar to the consensual method that necessities should be defined by majority opinion. These necessities are converted into a consumption budget based on products market prices. This budget then would act as a poverty line. Households with outgoings below it are deemed as poor and those above it are not regardless of if they purchase different items. The surveys use of multiple measurements of poverty can be seen as moving towards an effective definition and understanding of poverty. However it can be argued that the consensual method needs to be refined or altered as seen through changing towards a majoritarian basket of necessities’ would be more appropriate would be more adequate in ascertaining a finer concept of poverty.

Fundamental to the survey being effective in measuring poverty, deprivation and related social exclusion was that concepts remain static however as with the case of necessities this caused issues. One of the issues within the survey can be the issue of income between groups when considering necessities. McKay and Collard (2003) highlighted that distinct differences on what necessities are emerge depending on income. With higher income groups identifying differences in perceived necessities in that higher income are likely to identify an item as being a necessity compared to lower income group. Bradshaw and Main (2010) suggest that perhaps the reason for necessity difference between income groups is one of cultural differences. Similarly the questioning related to perceived necessities can be seen to cause issues when considered for children because they are not factored within the consensual method framework.. Bradshaw and Main (2010, p. 5) argues that the survey can be criticised in how and by who necessities were selected and that the parents became a proxy for the child in the survey. Adults in the survey acted for themselves through the consensual method, as such were able to decide on necessitates and items to be included.

However the same cannot be said of children due to parents acting as a proxy for them in the survey in this regard. As such the measure in the survey can be seen as only a proxy of child poverty from a poor parents perspective. The survey use of minimum Income questions to create a subjective poverty line is effective in that it is informed by expert opinion but defined by society itself. Citro and Michael (1995) have highlighted that subjective poverty lines rise with house income levels as such there may have fluctuations over time in different social groups depending on pressure on income or a change in social structure such as aspirational levels of the group declining. Necessities as a concept within the survey can be seen to be contested amongst the participants and as such it is arguably that it is not possible to achieve it’s aim in aiding to effectively measure poverty, deprivation and related social exclusion. Similarly the agency given to adults via the consensual method is not extended to children and as a result it can be argued that what is being measured is not a measure of child poverty, deprivation and social exclusion but rather a poor parents perception of a child’s experience of these situations. Similarly the construction of a subjective poverty line can be left open to fluctuations that will impact it’s useful as a tool.

The survey aimed to ascertain the level of social exclusion through use of defining four dimensions of exclusion. These were impoverishment, exclusion due to inadequate income or resources, labour market exclusion, service exclusion and exclusion from social relations. Gordon et al (2006) in the survey conclusion correctly highlights an issue with the survey itself, that while it may aim to achieve a greater understanding of exclusion it is hindered due to a high focus overly concentrated on employment and poverty. However the use of direct measure techniques can be seen as innovative. The lack of wider base of indicators could be argued that the ability to unpack the different aspects of social exclusion are not possible. The surveys use of direct measurement approaches applied to the idea of social exclusion especially focusing on domains such as social relations or participation in common social activities can be seen as furthering an understanding of social exclusion.

A Critical Evaluation of the Study Poverty and Social Exclusion in Britain: The Millenium Survey. (2021, Sep 29). Retrieved from https://studymoose.com/a-critical-evaluation-of-the-study-poverty-and-social-exclusion-in-britain-the-millenium-survey-essay 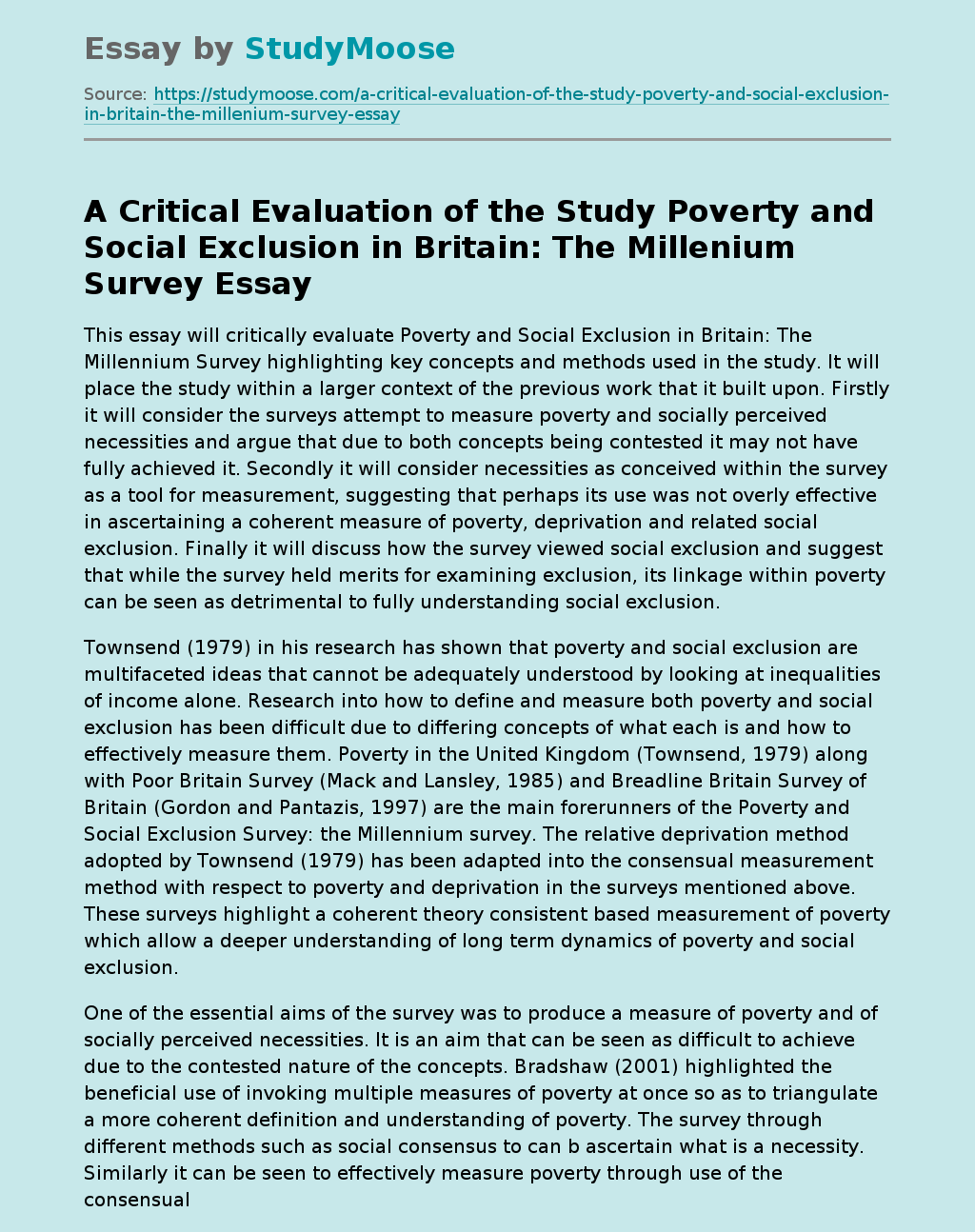