The eight Millennium Development Goals (MDGs) emerged from the United Nations (UN) Millennium Declaration in 2000, and are arguably the most politically important pact ever made for international development. They identify speciﬁc development priorities across a very broad range, including poverty, education, gender, health, environment, and international partnerships. These goals have substantially shaped development dialogue and investment; some development agencies judge all their activities on the contribution to achievement of the MDGs.

Overall, progress towards the MDGs has been described as “patchy” and “uneven”.

Don't use plagiarized sources. Get your custom essay on
“ Millenium Development Goals ”
Get custom paper
NEW! smart matching with writer

The broad conclusion is that few goals are entirely on track globally, and those that are show substantial variation, with least progress in Africa and often south Asia.

The MDGs comprise a set of eight goals and associated targets and indicators. They represent the latest eﬀort in a long process of development goal setting which had antecedents in the Universal Declaration of Human Rights, the Development Decade of the 1960s, and the many UN summits of the second half of the 20th century that set speciﬁc goals to reduce hunger, improve health, eradicate diseases, and school children.

The Millennium Declaration presented six values that were considered to be fundamental to international relations in the 21st century: freedom, equality, solidarity, tolerance, respect for nature, and shared responsibility. Seven key objectives were identiﬁed to translate these shared values into actions: peace, security, and disarmament; development and poverty eradication; protection of our common environment; human rights, democracy, and good governance; protection of vulnerable people; meeting of the special needs of Africa; and strengthening of the UN.

The performance of individual MDGs so far suggests that they have made four important positive contributions: encouraging global political consensus, providing a focus for advocacy, improving the targeting and ﬂ ow of aid, and improving the monitoring of development projects. The MDGs are claimed to be “the ﬁrst global development vision that combines a global political endorsement with a clear focus on, and means to engage directly with, the world’s poor people”.

There are many challenges posed by the Millenium Development Goals. Set against these positive contributions are several shortcomings that emerge consistently across the analysis of individual MDGs. Characteristically, most of these weaknesses present themselves as the ﬂip side of the MDGs’ more positive elements.

Thus, the Millenium Development Goals, which has probably facilitated their acceptance and use, makes them at the same time limited in scope, whereas their quantitative targets and precise indicators often fail to capture some crucial elements of goal achievement. We have to accept that all goal setting involves such trade-offs.

However, the value of focusing on shortcomings of the MDGs lies in our potential to improve them, or replace them with something better. Ineﬀective MDGs pose two risks: they might not achieve their intended eﬀect, and they could lead to negative eﬀects by ignoring or impeding more eﬀective development and poverty reduction.

There are many problems with the goals set by UN. The MDGs represent a subset of a broader development vision expressed in the Millennium Declaration. Goals were never developed for several key objectives of the Declaration, including peace, security and disarmament, and human rights. The elements taken into the MDGs were in fact the speciﬁc targets associated with only one objective of the Declaration, that of development and poverty eradication. Some of these goals, being themselves derived from speciﬁc targets, were very narrow in conception: education goals focused mainly on primary education, whereas health goals focused only on three aspects of health associated with maternal mortality, child mortality, and speciﬁc diseases. 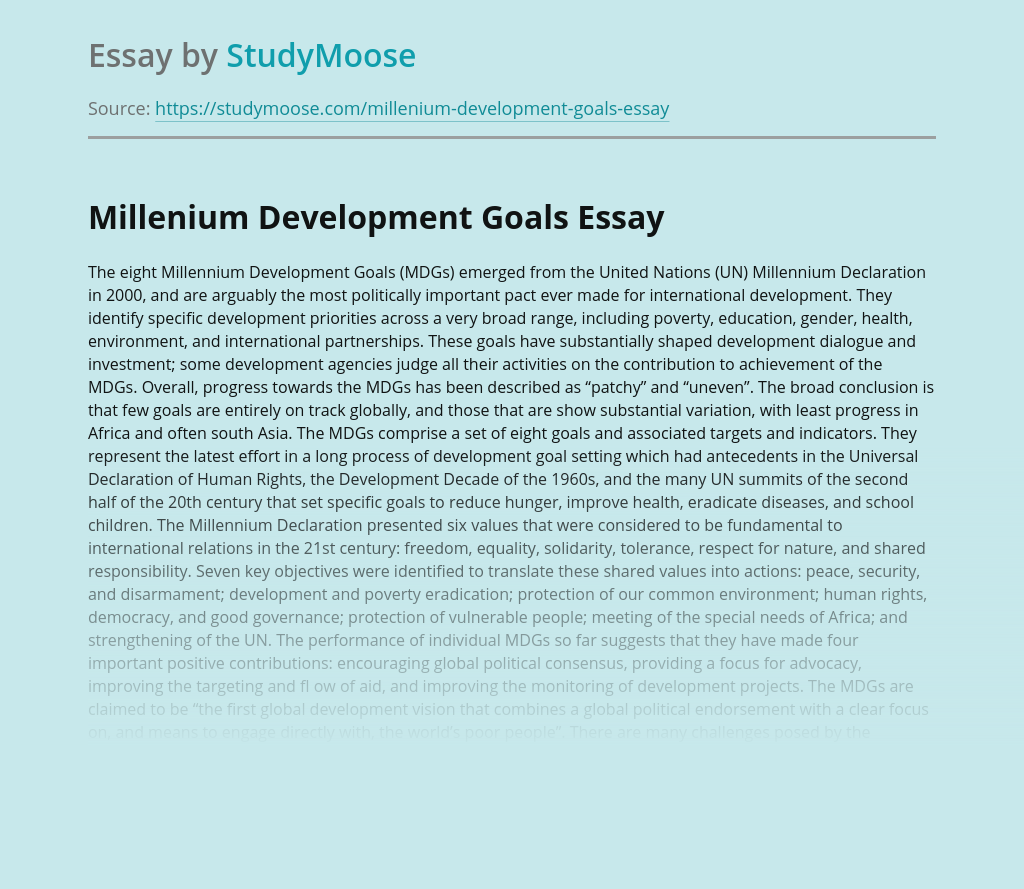