The sustainable development goals according to the UN are

Don't use plagiarized sources. Get your custom essay on
“ The sustainable development goals according to the UN are ”
Get custom paper
NEW! smart matching with writer

Temperature has been increasing exponentially these past few years, and the increase in temperature doesn’t only mean hotter days, it also means that biodiversity will decrease, habitats will disappear, endemic species living in very special parts of our planet will die off, the ice caps will melt, sea level will rise, cities will be flooded, and much more.

Thankfully, many people are aware of how big of an issue this is and are helping combat climate change greatly. Sadly, most of the big powers trying to deal with climate change are non-governmental organizations, as many countries are not able to work against climate change since they are the ones causing it.

One of the most popular Non-governmental organizations (NGO) is Greenpeace, which is an independent organization that focuses on various environmental issues, uses non-violent confrontation and exposes problems, including who causes them. One of their most popular campaigns is the “Save the Arctic” campaigns, which became popular after one of their ships, called “Arctic Sunrise” was stopped in the Pechora Sea, and after that two activists were arrested while protesting against oil drilling. Greenpeace has held multiple peaceful protests and has been able to pressure large companies like Lego to stop using non-renewable energy and stop advertising major oil companies like Shell and Exxon. Thankfully NGOs are not the only ones fighting climate change. Big countries like Canada have started to implement policies to drastically lower their greenhouse gas emission rate, as well as financially supporting other countries with fewer resources, in order to help them skip the usage of fossil fuels and go right into renewable energy. A few things the Canadian government has done to reduce their emission rate include: starting a strategy to reduce vehicle emissions by 100%, implementing a clean fuel standard on their industries, and reforesting their forests and other natural environments that require to be reforested.

The question that everyone should be asking themselves is: “what can I do to help, and will it actually help?” This question will do the two main things that are needed to combat climate change, inform and motivate. Someone who is both informed about how they can help and motivated to create change is guaranteed to make a change in their lifestyle and is likely to influence the people around them. Human beings are social creatures, and will usually copy the behavior of other humans that are close to it, so by creating the habit of living in a way that positively affects the planet, it encourages other people to make that change as well. The main thing people will say when talking about changing for climate change is that how can a singular person affect a global issue, and the answer is very simple, a single person will not have any effect at all. But thankfully, it will never be a single person working towards climate change, so when one person decides to make the change, it’s not just one person, but millions of people, which will definitely affect how climate change is affected moving forward.

People tend to feel useless when looking at a global issue, such as climate change since the effects sound catastrophic and make it look impossible for a single person to help. Contrary to popular belief, there are many ways that will impact ordinary life and the life of others positively, while still fighting climate change, all from the comfort of someone’s home. Statistics demonstrate that a simple action such as not eating steak for one week, is the equivalent of taking a car off the road for nearly three months, and if everyone in the united states did not eat meat or cheese for just one day of the week, it would be the same as not driving for 91 million miles. That is an average of 36764 tonnes or 33,351,740 kilos of carbon dioxide. Another way to drastically impact this problem is to demand, by demanding change governments and large companies are forced to comply. Going to protests like Fridays for future or demanding more of a specific, eco-friendly product while purchasing less and less of the less environmentally friendly products, since this will make the companies produce more of the popular product. This is a peaceful way of protesting as seen before when Greenpeace forced Lego to stop supporting oil companies.

These age groups are relatively well spread out, and represent the elderly, the middle-aged, and the young generations. The main reason why these groups were chosen, was because of their drastically different views on climate change. Boomers were the ones who spent many resources and their time ruining the planet, and do not want to take any of the blame. Former car retailer John Myles (69, boomer) claims that Climate Change was a myth made up by Millennials because they didn’t want to get real jobs. Millennials, on the other hand, started to face the effects of climate change near the middle of their lives, and have taken up action in order to make a change, blaming the boomers for most of these issues. Pete Buttigieg, mayor of South Bend, Indiana, stated during a policy speech that climate change must be treated like the existential security challenge it is. Last but not least comes Gen Z, who were born into this crisis and are constantly burdened with the thought of an almost apocalyptic future compared with our current lives. Gen Z has the most influential teenagers in history, a prime example is Greta Thunberg. Greta is a 16-year-old activist who promotes fights against climate change and started the very popular “Fridays for future” protests. These three different demographics all have very different points of view, but that won’t change the fact that each and every one of them is being affected by climate change, and they will continue to be affected by this until they all take action together. Statistics report that by 2020, millennials and gen Z will start to create massive change regarding climate change.

From a personal opinion, I have realized that there is an insane amount of stereotypes from supporting the planet, and every generation has certain people that see it as a joke, and therefore they will ignore what’s happening or not take it seriously at all. As previously stated, humans copy behavior, so when there are people making jokes about it and ignoring the problem, others will follow suit and this can be devastating to the movement, which has taken a very long time to develop a concrete following. Many people believe that you can’t affect the world by yourself, which leads to fear or laziness and that will lead to them not trying to help, which will create a vicious cycle which leads to not caring about this very important movement. There is also a huge bias when talking about climate change, since some people benefit greatly from the main causes of climate change, like US President Donald Trump, who owns an oil corporation. Shutting down this oil corporation for the sake of the planet will reduce his annual income, therefore he fights against climate change for his own benefit. This can make politics an extremely flimsy topic when speaking of climate change since most politicians gain a gracious amount of money due to multiple oil rigs and companies all over the world. This leads them to ignore protests and attempt to not make laws against the use of fossil fuels.

The sustainable development goals according to the UN are. (2019, Nov 22). Retrieved from http://studymoose.com/the-sustainable-development-goals-according-to-the-un-are-example-essay 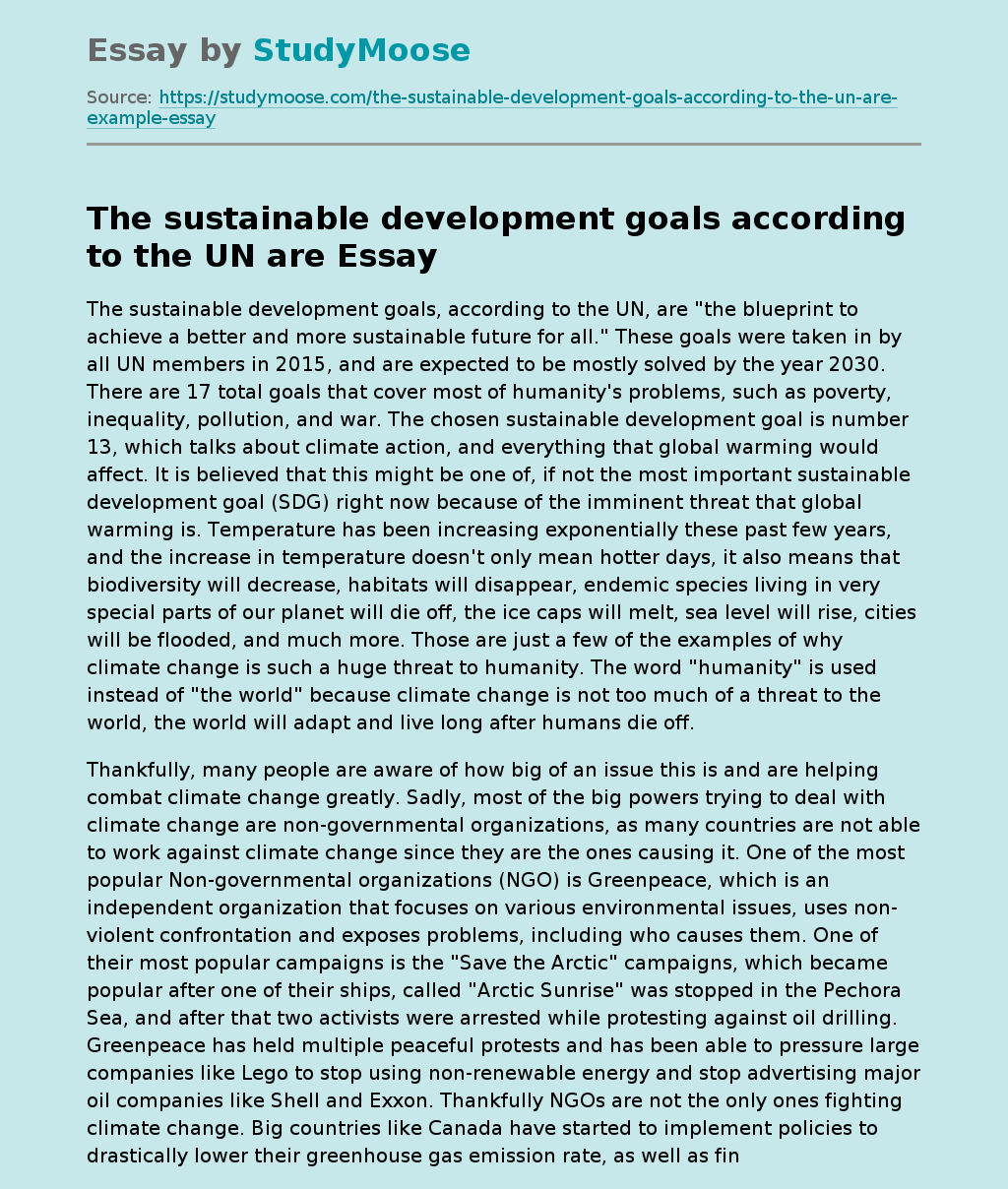