The Exclusion of Women from The American Dream

The American Dream was believed to be the concept of the new life that one would wish to have, it was known as the right of the individual to have freedom, liberty, and the pursuit of happiness. Women were affected by the role of men and their position in the American society during the 19th and early 20th century. They were oppressed in society and home due to their gender, race, class, and appearance. Men believed to be superior in all aspects of life, while women did not have many rights, they were not allowed to get education and their only role is to get married.

Don't use plagiarized sources. Get your custom essay on
“ The Exclusion of Women from The American Dream ”
Get custom paper
NEW! smart matching with writer

The patriarchal society did not allow women to have the same privilege as men, which stopped them from living the American Dream. Women believed that they have the opportunity to play a major rule in changing their lives and roles in the society. This research tackles the portrayal of the Victorian women in the two literary works of The Great Gatsby and ‘Desiree’s Baby’.

The Great Gatsby is a novel written by F. Scott Fitzgerald during the roaring twenties, published in 1952. It describes the ideal women from men’s perspective. This novel was written in an era known as the Jazz Era which was a period of many changes in the society, especially for women. Women started to have some freedom, they started to get education as well as having the right to change their dress code. While Kate Chopin’s short story ‘Desiree’s Baby’ was written in 1893.

It is a short story about a woman who did have a good life and stable marriage until her husband suspects that the child is not originally white, and he abuses her by suppressing his love. It shows that women suffered from oppression due to their race, gender, originals, and class. In these two novels, women suffered from inequality, discrimination, and objectification. They seemed to be excluded from the American Dream as they didn’t have the right for liberty, freedom, or happiness. Due to the humiliating behaviors and actions toward women, their idea about the ideal American Dream failed because they were not allowed to have their freedom and pursuit their happiness as reflected in Fitzgerald’s The Great Gatsby and Chopin’s ‘Desiree’s Baby’.

The position of women had been studied in many works of literature. According to the book Victorian People and Ideals by Richard Altick, it wasn’t acceptable for women to get educated as they were seen as inferior to men, and they should not have the same knowledge as they do. Another research shows that once women were forced into a working position, they could not really see much hope or achievements. They were unaccepted by the high nor the low class society as they were viewed as a threat to their marriage and household (Barret 20). Women who had to work to survive were putten into the worst working conditions, they were the one who suffers at the end of each day, because women from their class would avoid them and make their lives difficult on the daily basis (Barret 48). Analysis Starting with the women characters in F. Scott Fitzgerald’s novel, The Great Gatsby. Women suffered from discrimination and objectification due to their gender and class. Daisy’s character is introduced in the novel as a woman who is not happy in her marriage, but pretends to be happy. She can barely live a happy life and ignores her problems instead of facing them. She realizes that women are valued only for their looks and foolishness. This was shown when she hopes for her daughter to be a “beautiful little fool” (Fitzgerald 20). This also shows that Daisy is criticizing the world she lives in, as women at that time had to be stupid and beautiful in order to have a good life. In this novel men attempt to control over their wives, they believe that women should not act in the same manner as they do. Tom believed in the idea that men are free to have an affair but women are not. He objected that his wife is engaging in the same behavior that he did, he objects that Daisy is having an affair with Gatsby while he is doing the same thing with Myrtle. As for Gatsby, Daisy was his dream but he failed to achieve his goal.

On the other hand, Myrtle, a woman from the low-class who lives in the wasteland between the eggs and wishes for better living conditions. Before the Jazz era, the main role for women is to take care of their husbands, but Myrtle’s desire in having a better life allowed her to cheat on her husband. She saw her affair with Tom as a way to get materialistic gifts in order to improve her poor situation, while for Tom she was just an object who he would abuse and control. Her tries to achieve the American Dream failed when she was hitten by Daisy’s car and died. This situation can symbolize the way that rich people can prevent the poor from achieving their dreams. Moving to the women characters in the short story ‘Desiree’s Baby’ by Kate Chopin. This story shows that women suffered due to their race and originals. In this short story, the writer views the relationship between men and women, as men were dominant and women were sensitive and vulnerable. During that time, men decided the women’s role in life and marriage was the way by which men would gain a total control over women. Women also suffered from the patriarchal system during their marriage. In the beginning of the story Armanda falls in love with Desiree, this shows Armanda’s impulsiveness when he falls instantly in love with Desiree. Desiree accepts her role as being a submissive wife, and tries hard to please her husband and hopes for her husband to respect her. However, her dream never came true, though, her husband never acknowledges her as a woman who has the same privilege as he should have. Desiree’s happiness is associated with her husband happiness as well as her sadness. After her birth to her baby her husband discovered that he is a quadroon (1/4 black), however, her neglects his baby and blamed Desiree for that, saying: ‘that child is not white; it means that you are not white.’ (Chopin 4).

The Exclusion of Women from The American Dream. (2020, May 15). Retrieved from https://studymoose.com/the-exclusion-of-women-from-the-american-dream-essay 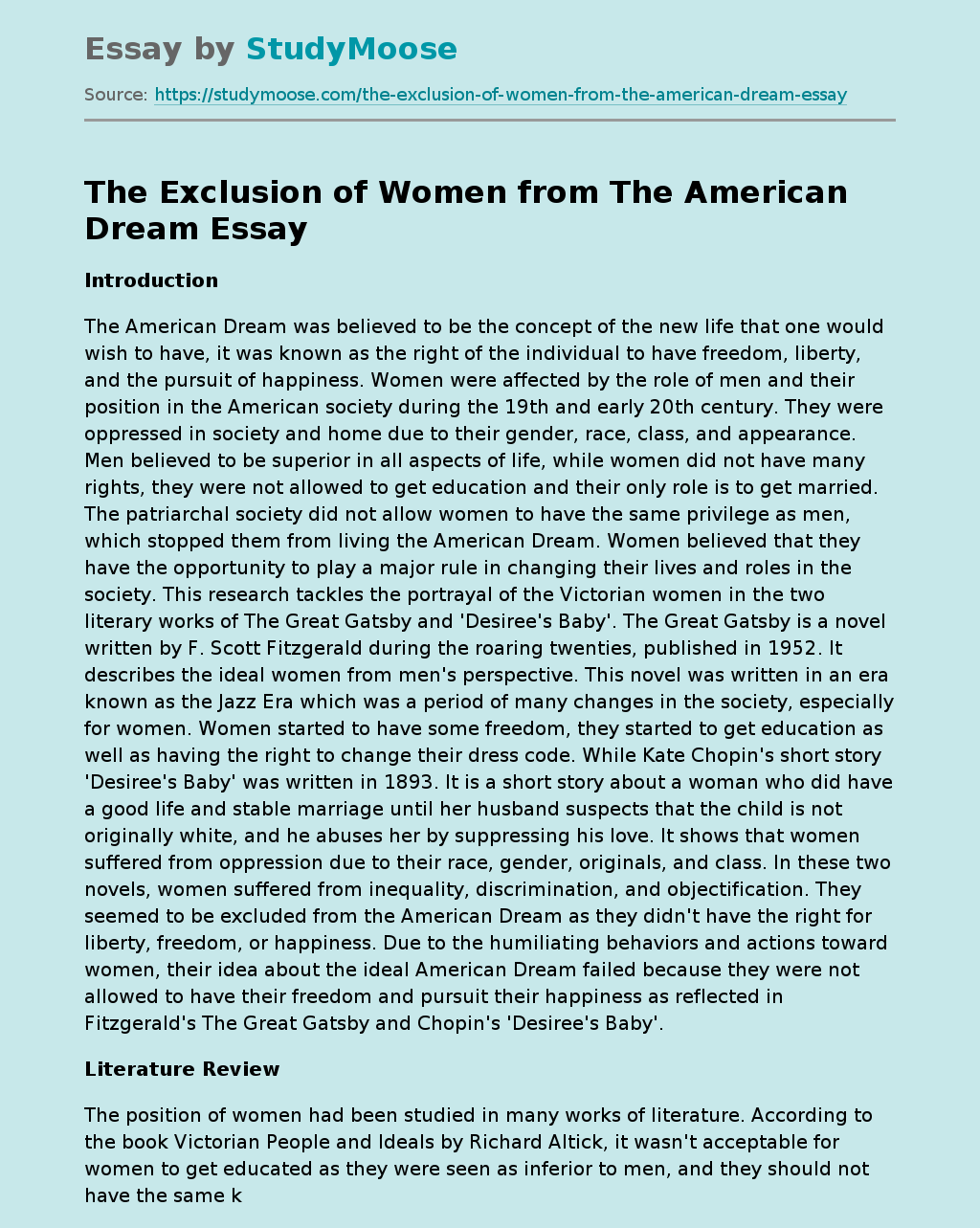