Mutual Mistake of fact is when both parties of a contract make an assumption of fact when contract is formed and signed. The mistake must significantly change what you have to do under the contract, almost to the point where it’s an entirely different agreement. Although, if you knew there was a strong chance or probability of mistake at the time the contract was signed, you may have assumed the risk of that mistake. You therefore cannot use the mutual mistake defense.

Don't use plagiarized sources. Get your custom essay on
“ Mutual Mistake ”
Get custom paper
NEW! smart matching with writer

Not all cases of Mutual Mistake are strong enough to void a contract.

In the given case: Josh Hartly was interested in purchasing a new car and visits his local auto dealer. In the course of his negotiations, he tells the salesperson that he wants the car with a 3.2 liter V6 engine and not the one with a 3.9 liter engine because he has concerns regarding the fuel economy of the 3.9 liter engine.

Josh then signs a contract agreeing to purchase the car with a 3.2 liter V6 engine. What neither Josh nor the salesperson knew was that the manufacturer had already stopped manufacturing both the 3.2 liter and the 3.9 liter engines, and was equipping the cars with a newly designed 3.5 liter engine. This is a mutual mistake of fact that makes the signed contract void due to the lack of knowledge by both parties that the manufacturer had stopped making the cars with either a 3.2 liter or a 3.9 liter V6 engine and now only makes a 3.

5 liter V6 engine for there cars.

Someone trying to avoid his or her obligation under a contract can raise a mutual mistake defense. The defense states that both parties to the contract relied on a mistaken assumption when entering the contract, which then makes the contract void. A mistaken assumption is a fact that both John Hartly and the auto salesman believed to be true at the time the contract was signed, in this case the fact in question was that John Hartly was to receive a car with a 3.2 liter V6 engine. However, due to the manufacturer discontinuing production of the 3.2 liter engine, this fact is no longer true. As a result, the salesman can no longer perform the contract as he originally intended. (LaMance, 2011)

It is absolutely agreeable that in these types of situations that a contract be deemed void from a mutual mistake of fact. If, for example, someone was contacted to dig a whole in someone’s backyard but after the contract had been signed both parties had found out that under a thin layer of dirt was solid rock, a mutual mistake of fact could make the contract void since neither party knew of the rock under the surface. If a mutual mistake defense was not possible then the person contracted to dig the whole would have to dig the whole under any circumstance and run the risk of destroying their equipment and/or having to spend more money for equipment capable of doing the job.

In the case of John Harlty neither party acted unethically. Though one could argue that the salesperson should of known that the manufacturer was to stop production on cars with either a 3.2 liter and 3.9 liter V6 engine and begin production on a new model with a 3.5 liter engine before trying to sell a discontinued car to a customer. This would make it a unilateral mistake of fact because the salesperson had a reason to know of the mistake and it was his fault that led to the mistake (Emanuel, 2011). But, on the other hand, buying a new car is a pretty big deal and the potential customer should have done their own research and found out that a certain model of car was to be changed in the coming weeks, months, years, or however long it was until the change.

The Uniform Commercial Code or UCC is a model statute that has been adopted by every state in the United States in its entirety. The UCC is most often used to resolve contract disputes for the sale of goods (LaMance, 2013). The UCC only deals with merchants, which is defined as anyone with a special knowledge in a given commercial field. Therefore, a sale of goods between two private, non-merchant parties will not be subject to UCC requirements (Rivera, 2013).

In terms of winners and losers, there are no winners. One could say that the winner would be the buyer because they won the defense of mutual mistake of fact but they are still with out what they were trying to buy in the first place. The loser, though, would be the seller because they have lost
business with the possible customer and made no profit in the sale that is now void.

Mutual Mistake. (2016, May 10). Retrieved from https://studymoose.com/mutual-mistake-essay 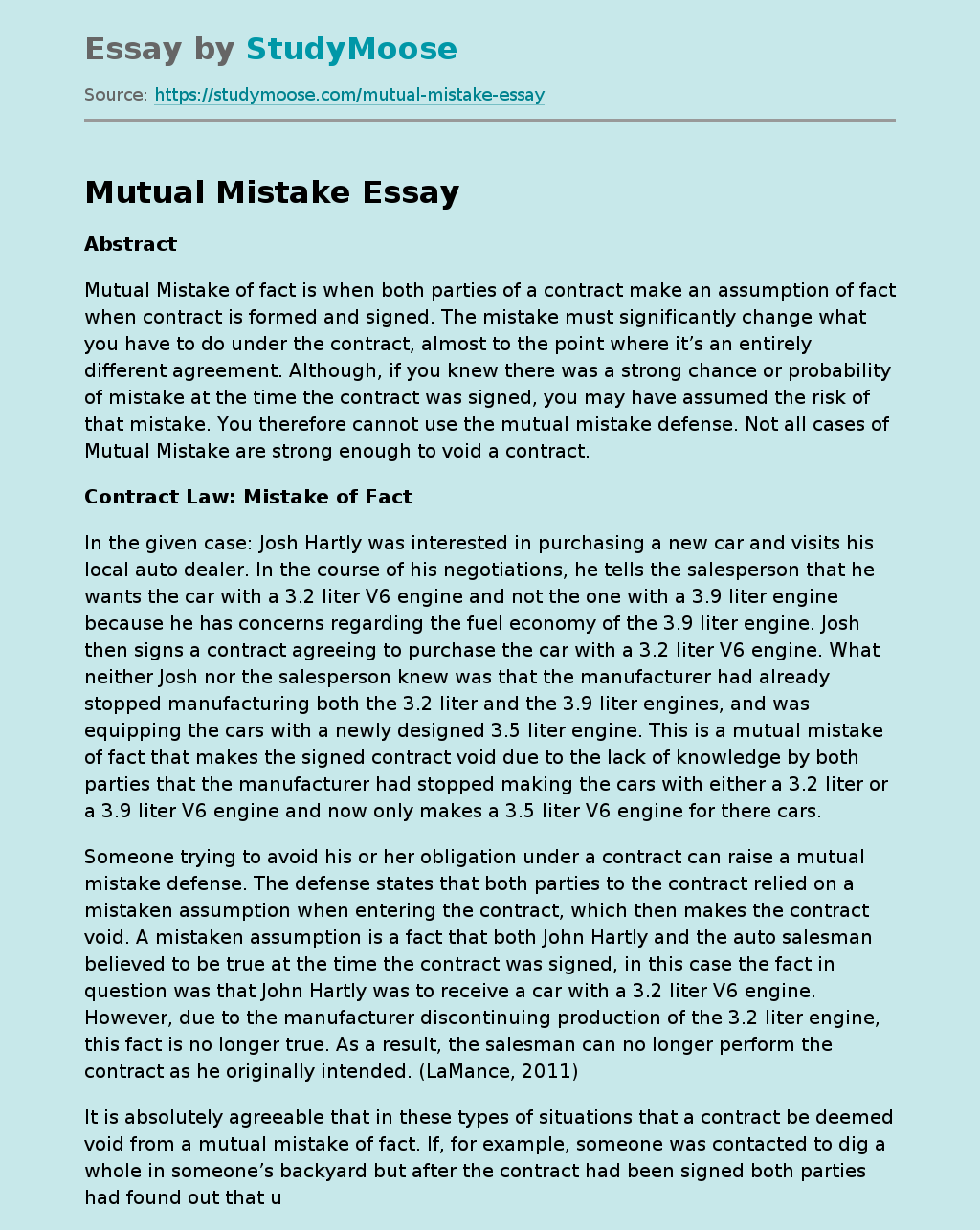