Was and Appeasement a Mistake

Neville Chamberlain and Adolf Hitler shook hands at the Munich Conference in 1938. This resulted in the pact, signed Sept. 29th, which recognized the German annexation of the Sudetenland in Czechoslovakia in return for a promise that there would be no further aggression. This policy of appeasement failed to prevent the outbreak of World War II. Below there are a number of arguments. Some prove that appeasement was a mistake and some suggest that appeasement wasn’t a mistake. Create a table with two headings – ‘A mistake’ and ‘Not a mistake’.

Don't use plagiarized sources. Get your custom essay on
“ Was and Appeasement a Mistake ”
Get custom paper
NEW! smart matching with writer

Write each argument in the correct column. – Germany deserved a fair deal – Germany treated too harshly at Versailles, so were only being given their rightful land. – Germany was growing stronger – Allowed Germany to grow stronger meant it would be far more difficult to defeat.

– The British people had to want war – In 1938, public opinion was against war – so the policy of appeasement was sensible. – Fear of another war – People wanted to avoid another terrible war and did everything possible.

– Appeasement scared the USSR – When Britain and France did not stand up to Hitler, the USSR became worried about German power – and began thinking about deals with Hitler. – It encouraged Hitler – Giving into Hitler only made him feel he could do what he wanted – without fear of being stopped.

– Britain needed time – By giving Hitler what he wanted, Britain had more time to build up her armed forces. – Munich Agreement was a disaster – Churchill said Czechoslovakia was sacrificed for nothing – Hitler had fooled everyone.

– Fear of Communism – It was felt better to support a strong leader of Germany rather than risk Communist takeover. – Hitler was determined to conquer Eastern Europe – Hitler had made his plans clear – the policy of appeasement was clearly doomed from the start – Hitler just lied.

Was and Appeasement a Mistake. (2017, Feb 16). Retrieved from https://studymoose.com/was-and-appeasement-a-mistake-essay 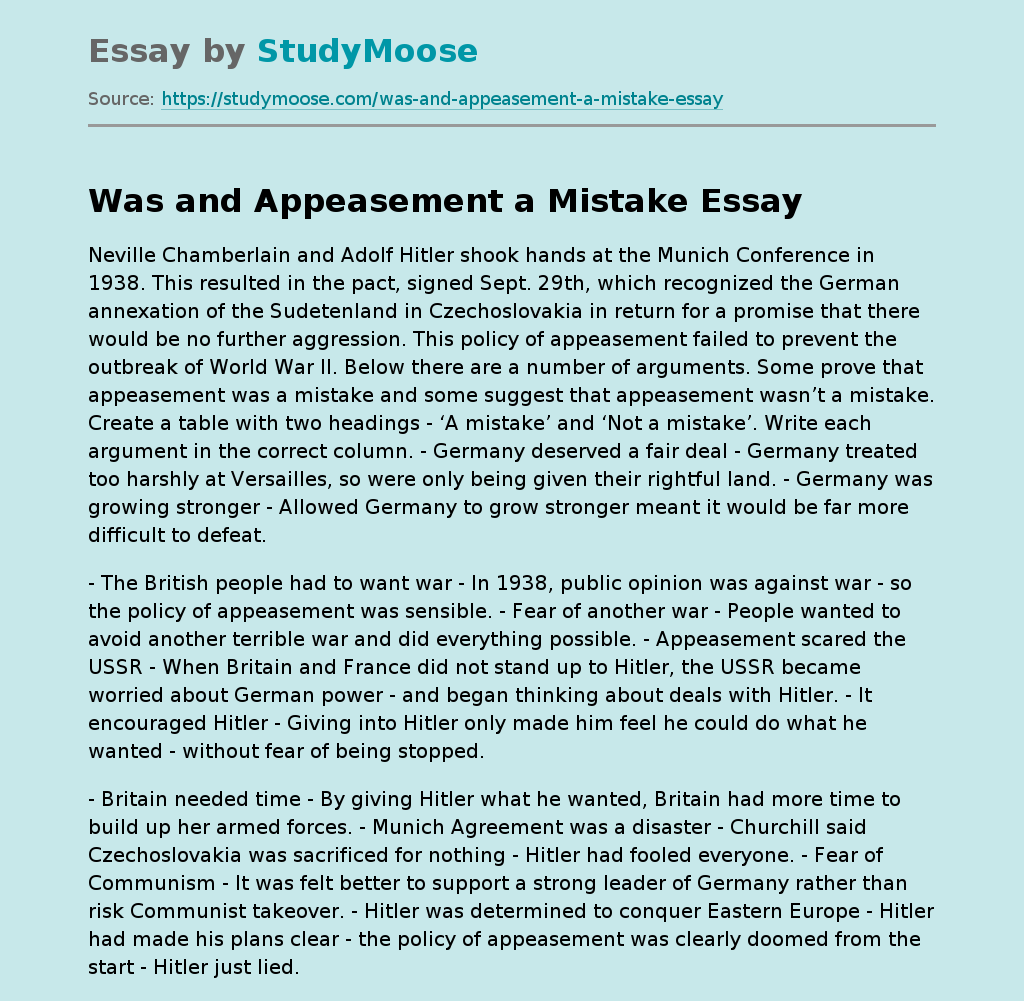