The main point for consideration in this situation is whether the initial agreement between Packard and Hewlett constitutes as a contract that has a legal relationship, and if so, is Hewlett within his rights to void the established contract and sell the laptop to the offeror with a higher price. The General Principle of Law here would imply here that Hewlett and Packard, are in a contract due to consensus ad idem, in that a meeting of minds must be between the two parties to be counted as a contract (Don Mayer, 2011).

Don't use plagiarized sources.
Get Your Custom Essay on Business Law Assignment Just from $13,9/Page

This contract is enforceable as the following factors are present:

2)Acceptance: Packard had clearly communicated his unconditional acceptance of his offer, thereby closing the offer.

3)Consideration and Legal Relations: Consideration under the Law is defined as “some right, interest, profit or benefit accruing to one party, or some forbearance detriment, loss or responsibility given, suffered or undertaken by the other” Currie v Misa (1875) (InBrief: Free Legal Information, 2014).

Hewlett promised to do the transaction of the laptop tomorrow after he transferred his data in the laptop and Packard agreed. This is executory consideration and shows that due consideration has been done on the part of the promisee. Legal relations are thus also created.

They are thus in a legally binding contract and either party can sue should there be a breach. Hewlett is not able to revoke his offer once accepted even if someone were to offer him a higher price for the laptop. However, Hewlett sold his laptop to Compac for $1000, discharging his contract with Packard by Breach. Hewlett has by his own act disabled himself from performing the contract and Packard can thus

bring action against him for the Breach of Contract. The Principle guiding this was established in Synge v Synge (1894). Recommendation and Conclusion
In conclusion, Packard is able to bring action against Hewlett for selling the laptop to Compac even after an initial contract was established with Packard. He is able to sue under Discharge of Contract by Breach and the Court will likely move possession of the laptop back to Packard after Packard pays Hewlett the $800 as agreed. Hewlett will also have to refund Compac his $1000. 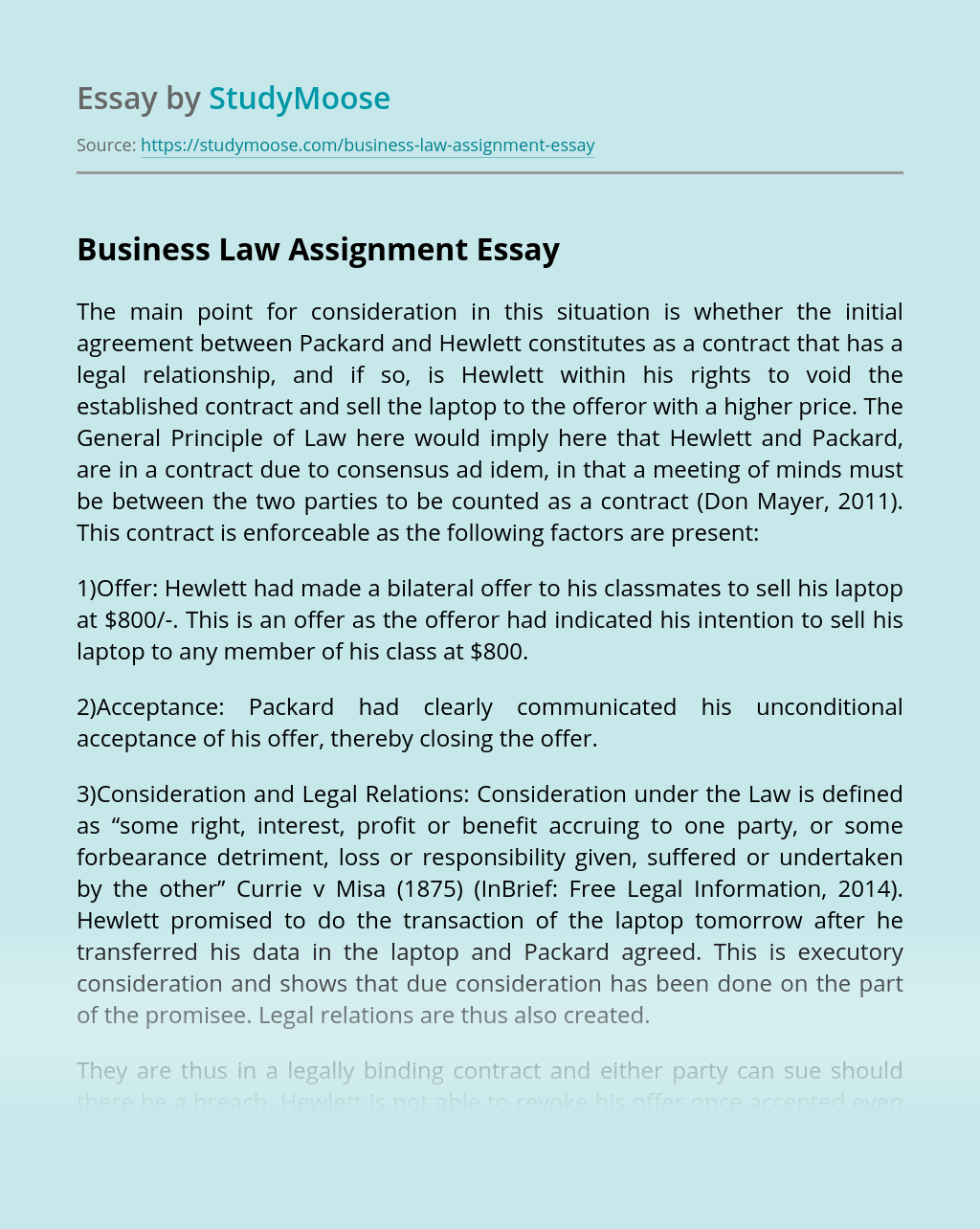 Why digital marketing is imperative?

Digital Marketing Introduction        Marketing has become of the vital aspects in business running. This is the method of communicating the worth of a service or a product to the customer by a producer or the seller with the main intention being selling the product or services. There are numerous types and forms... VIEW ESSAY

Analysis part Question 1 In its competition with Netflix, where did Blockbuster go wrong? How was the use of customer data a key differentiator? How might Blockbuster have better positioned itself against Netflix? Answer 3 things that Blockbuster goes wrong are: 1. Slow & Inadequate Response “No Late Fees” program was misleading “Total Access” program... VIEW ESSAY

Had been very busy lately finishing up on all the marking and a host of other stuff. Why is it that everything has to come together at the same time? Now I have to advise my students on completing their Business Model Assignment. My advise to them: “Do a little bit every day. Don’t wait... VIEW ESSAY

Charging off equipment that cost less than $20 would be an example of the application of: a. |going concern| b. |cost| c. |matching| d. |materiality| e. |realization| ANS:D 2. The going concern assumption: a. |is applicable to all financial statements| b. |primarily involves periodic income measurement| c. |allows for the statements to be prepared under... VIEW ESSAY

View sample
Why I Want to Study Business Administration

Having been looking for a college that would suit me as a student athlete, I turned to some of my senior of my seniors would had already entered college and had gone through the same process. I got impressive feedback but it was not until I received an email from Coach Jason Shaver with a... VIEW ESSAY