This essay will discuss the Case study by firstly identifying four elements of contract, then justifying duties of Mr. Martin with applying the principles of pre-existing contractual duties. Finally a discussion about part payment of debt and promissory estoppel will be explained. Likewise, this essay will evaluate the knowledge of common law and agency relationship.

a) Four essential elements of a contract should be Offer, Acceptance, Intention to create legal relations and Consideration. Firstly, offer, according to Adams(2012), is a full and clear statement of the terms”(p79) send to a party(the offeree) by another party(the offeror).

Otherwise there could be a misunderstanding of an invitation to treat or negotiation which are similar statements. If an offer intends to be legally binding, acceptance, by which the offerees can show their agreement of all the terms of the offer, is needed. Acceptance needs to be valid and informing the offeror, while the terms should as same as the previous ones.

Another element, i.e. consideration, aims to make sure the promise made is of value.

As defined by Jones (2011), the consideration needs to give benefits to the one, who is suffering a loss at the same time. Last but not least, while making an agreement to be legally enforceable, intention to create legal relations is important. While judging whether it is a binding contract or not, the situation to make this contract needs to be considered, in other words, according to Adams(2012), contract made in a domestic or social environment will not be legally bound.

Otherwise, if parties are willing to do a commercial agreement, it will be regard as legally bound(Jones, 2011).

b) Mr. Martin need to pay the £750 due to two reasons, based on three cases existed as judicial precedents, which are Stilk v Myrick(1809), Hartley v Ponsonby(1857) and Williams v Roffey bros(1990)One perspective is that there is an additional value within the new contract, though Mr. Martin and Bob the builder were being under a pre-existing contract. Hold that the old contract is not over, due to the other aspect of reason, Mr. martin needs to pay the extra money in order to avoid the loss. These afore-mentioned two points will be justified by cases. Stilk v Myrick(1809) indicates that a captain promised the seamen extra money if they did successfully return back home.

The court finally hold that the captain is not duty to pay the extra money because the old contract is existed as there is not of additional value. While Harley v Ponsonby(1857) was held that the captain needs to pay the extra money, though the situation is similar, because the court consider there is extra value added to the new contract, whilst the old contract is discharged. There are some similarities among these two cases and Mr. Martin’ s case. Mr. Martin also have an existed contract as both parties are agreed to terms of the contract, but comparing to Stilk’s case, Bob the builder suggest a sub-contract with consider an additional value, which is the value of Martin’s seafood. Meantime, because of the bad weather and sick crews, Marin need to pay extra money to ensure this additional value is secured, however, this does not means the old contract is over because the contract can be fulfilled though it may probably be expiry, as Martin has to pay extra £750 in spite of the payment of the previous contract.

On the other hand, in Williams v Rpffey bros, the claimant consider the loss of defendant if the task is not finished on time, so the defendant do have to pay the claimant the extra money as promised. In this case, Bob the builder consider the benefit of Martin so that they suggest the sub-contractor. As Mr. Marin accepted Bob’s counter offer and Bob help him avoid the loss of an amount of seafood. According to the precedent of Williams’ case, since new value to considered, Mr. Martin should pay the extra £750. To be concluded, by referring to pre-existing duties, Mr. Martin is obliged to pay the extra £750.

c) Mr. Martin needs to pay the full £750, as he violates the rule of part payment of debts. When consider the part payment of debt, it is necessary to concern the rule in Pinnel’s Case(1602), by which illustrated that part payment is not a sufficient consideration. Because debtors obtains a benefit with giving nothing of value to the creditors. In Marin’s case, Bob agreed to accept a lower payment(£350) in full settlement despite of any excuse Mr. Marin has used. Obviously, Mr. Martin got a benefit of £400, whereas Bob gained nothing. Therefore, Mr. Marin provided no consideration in this case, because being sympathizing Martin’s bankrupt cannot gain more value for Bob. Since two parties failed to achieve benefits of two sides, the promise of Bob is not binding.

As a result, Martin has to pay the full £750 as a legal duty. Apart from that, with regard of the classical High Trees House Case(1947), the principle of promissory estoppel by held that the claimants can acquire the arrears after the end of the war because they have the capacity of claiming the recover the previous price before the war started. However, they are prevented to take back the amount of arrears failed to pay because of their previous promise. In High Tress House Case, the promise was make on a real situation where two parties would consider their benefits therefore achieve benefits of both sides. Specifically, the defendants get the right of lease whilst the claimants obtained a number of profits.

According to PPP(n.d.), the common law is the law comprises the custom and judicial precedents of the courts. First feature of common law is that it is not codified, making it is not coming from the comprehensive legislation which is created through Parliament. Apart from EU enforceable law, common law depends on the distributed courts, in where legislative decisions are made. In other words, common law is the certain law made by judges. The decisions have been made in similar cases would become precedents, which mainly compose the common law. These precedents will be collected and recorded as historical documents or files over time.

When coming up a new case, these precedents would be applied in the decision, which means precedents make future decision legally bound. Hierarchy has to be referred to when talking about the precedent, whereas not every precedent will be used in judging a new case. The precedent made in a higher court can be applied in a lower court, otherwise it will not be applicable. For example, a judicial decision, i.e. precedent, already made in court of appeal should be applicable in high court or county court, but a decision made in county court should not obliged to follow for high court. On the other hand, the courts can overturn the decisions of those in same level. Last but not least, the common law make contract more freedom, which means there are few regulations to restrict contracts. Basically, everything could be acceptable even if there is extremely forbidden by law(Adams, 2012 and Jones, 2011).

According to Adams(2012) and Jones(2011), the relationships between agency and principal are fiduciary ones. Basically, agents do not have legal right to payment unless the principal authorise the right. Generally payment must not be due until the agent have fulfilled the expected result of principal, otherwise, payment can not be used among any certain process on the relationship. However, agent can be regularly paid when agreement express willingness of both sides. Another right of agent is to claim indemnity if there is any expenses incurred when agent conduct the authority, no matter the agent is gratuitous or not. On the other hand, agents do have duty to possess reasonable care and skill, moreover, an agent with professional or trade skill is expected to preserve the skills as conducting a trade or profession.

Then, a contractual agent must carry out the agreed tasks and the whole process of achieving the result should follow the principal’s orders. Therefore, an agent needs to perform his duties himself. The performance of the duties cannot be delegated to any third party. Likewise, the agent is required to be accountable for any profits arising from the performance of the duties and to record the benefits of exercises of authority. Besides, an agent has duty to avoid the possibility of being conflict of interest without principal’s permit, though agent must not sell his own property or shares to principal. Last but not least, an agent not only cannot take any form of bribe, but also cannot make secret profit, whereby the principal can dismiss the agent and make the contract voidable for fraud.

In conclusion, case study has been discussed by applying the related law knowledge in terms of consideration of contract particularly. Therefore, basic explanation of common law and, duties and rights within agency relationship are demonstrated. 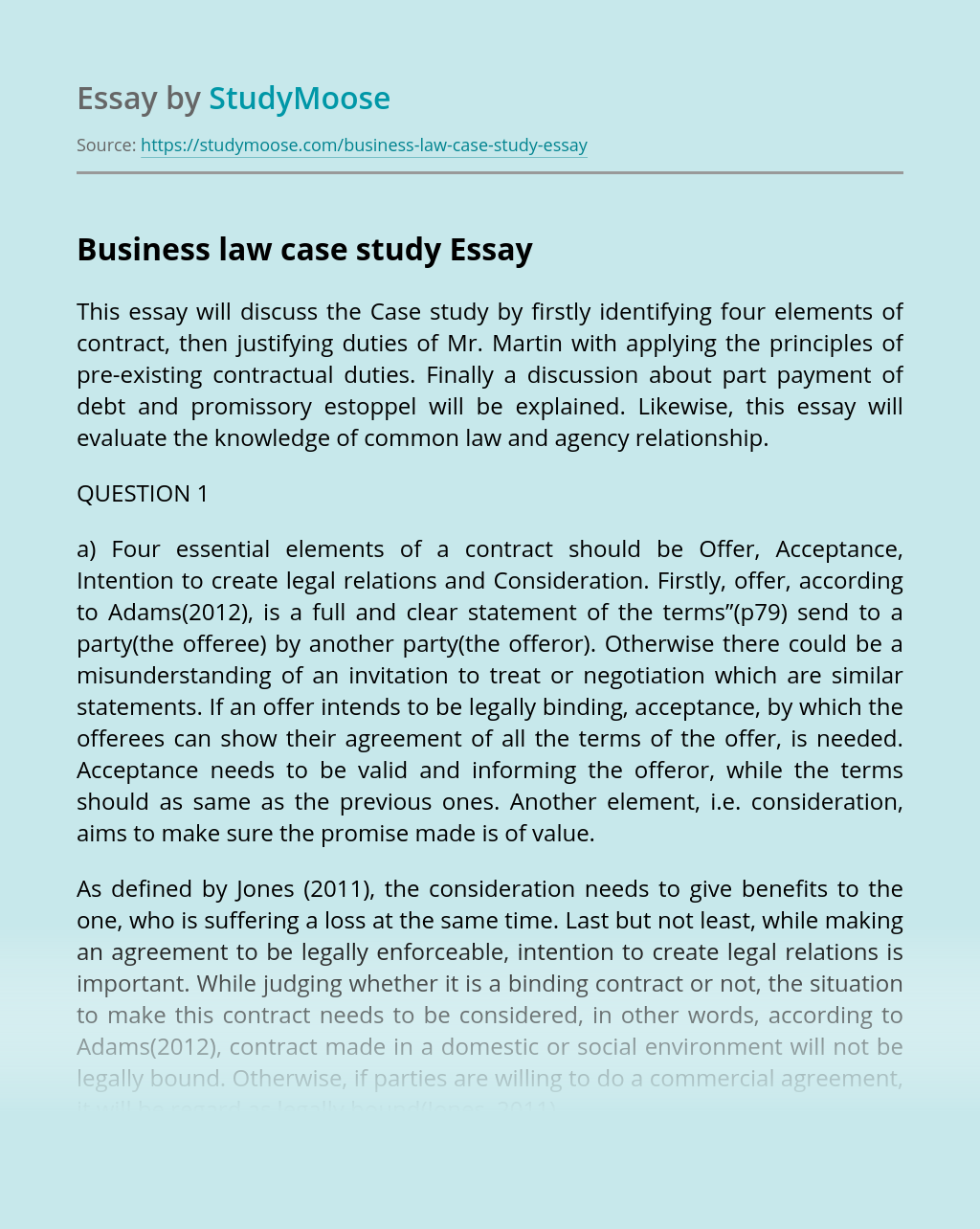