Even though Nureyev, born March 17, 1938, lived through an earlier period of time than Baryshnikov, born January 7, 1948, the Soviet Union remained virtually unchanged.

Don't use plagiarized sources.
Get Your Custom Essay on Compare Nureyev to Baryshnikov Just from $13,9/Page

Both dancers had defected thereby leaving the only life they knew in order to gain creativity instead of being controlled like puppets by the KBG.

Despite the fact that they both studied under the same ballet company (the Kirov Ballet), endured many hardships by defecting, and strenuously trying to make a name for themselves Baryshnikov and Nureyev shared some differences as well. Throughout this paper I will explicate their similarities and differences in regards to their personal lives, styles of dance, and contributions of the two greatest dancers of the Russian ballet.

As mentioned before, Nureyev and Baryshnikov both struggled immensely in the Soviet Union. They both had their fathers ripped away from them at an early age by coercion to join the military. Additionally, with Baryshnikov’s mother committing suicide and Nureyev suffering from the bullying of his classmates because of being so poverty-stricken–both felt isolated. Also, Nureyev was so poor that all his family could afford to eat were boiled potatoes. It did not help either that Nureyev had to wear his older sister’s feminine coat which gave more ammunition to his classmates to ridicule him. Nevertheless, they found an escape through their love of dance.

It was dance that opened a window to escape from the torture that followed them mercilessly living in Russia. Not only did dance provide a mental safe haven but a family too. Because they possessed a talent like no other, at separate time periods, Nureyev and Baryshnikov were personally invited by Alexander Pushkin, the director of the Kirov Ballet, to join the company. Pushkin and his wife became their surrogate parents to the point that they opened their homes and hearts to them.

They held such a deep affection for them that when Baryshnikov, just like Nureyev before him had defected, were greatly saddened yet relieved. They felt relieved because they realized that tremendous talents like theirs were being wasted in Russia. Baryshnikov himself stated, “I hated life in the Soviet Union.

You had to pretend something you didn’t feel” when referencing his life of dance in Russia. Even though Baryshnikov and Nureyev trained in the same company, both dancers possessed notably distinctive styles of dance. For instance, Nureyev started dance at the age of seventeen strictly out of free will antithetical to Baryshnikov who was hand-picked personally by the Soviets to study dance at an early age. Baryshnikov was given intensive training for the reason that the Soviets sponsored dance companies.

The dance companies were the pride of the Soviet Union, therefore; only those children with outstanding potential were given the opportunity to learn dance. Consequently, Baryshnikov’s skills became sharper than a knife. He leaped incredibly high, spun rapidly fast, and jumped at extraordinarily high lengths! Even longtime New York Times critic Clive Barnes admiringly stated that Baryshnikov is “the most perfect dancer I have ever seen.” As previously mentioned Nureyev commenced his dance training at the age of seventeen. As a result, he was not as physically adept but contained so much charisma.

He was often described as not just playing a character onstage but actually becoming that character. Nureyev presented firm masculinity while Baryshnikov was often perceived as feminine in comparison. Moreover, to mention another difference is Baryshnikov himself who said in a CNN interview that “We never worked — you know, his choreography, the classical stagings, not quite fit me technically.” Indeed, Nureyev belonging to an older generation did have an affect in differences. Nureyev is known as the father of modern dance while Baryshnikov formulated ways of representing modern dance as not just “classical” or “traditional” but conformed it more to the recent generation. Although their styles of dance are notable to mention of these adept dancers it is also imperative to mention their contributions to the ever expanding dance world.

It all commenced with them defecting to other countries. If they would have remained in Russia, their contributions would be non-existent. However, the process of defecting was not an easy task. It did not have the fun of sipping coffee while reading the newspaper on an airplane waiting patiently
to reach your vacation spot. Defecting was a life and death situation for them. For instance, Nureyev was at a tour to Paris with the company in 1961. Being tired of being so heavily enslaved by the KGB telling him where to go and what to do, Nureyev escaped. With the help of loyal friends, who clearly saw his desperation, they achieved in obtaining permission for him to stay in France.

He was able to get a refugee visa. However, Nureyev was sweating the entire time. Nureyev realized that in order to gain freedom he would never be able to see his family again. Even in his absence, he was sentenced to prison. The KGB remained so infuriated with him that he was not permitted to see his mother until her last dying days. Moreover, to really establish that Nureyev was not wanted back in the Soviet Union, Nikita Khrushchev, leader of the Soviet Union, personally signed an order to kill Nureyev if he ever returned.

Baryshnikov’s escape is also filled with dangerous thrill. He escaped for the same reasons because he knew he was not going to accomplish anything being so controlled. His escape was made in the year 1974 in the month of June right after his last performance as a Russian dancer.

He snuck through the back door of the theater and leaped in a hideaway car. It sounds simple but Baryshnikov also had family to worry about. The KGB were similar to an ever- prevalent and he was concerned that they would interrogate his friends and family as well. Baryshnikov had many heavy burdens on his mind but he could no longer continue being under such control.

Escape was decision that needed to be made—the only option. Now that we see the struggle these two courageous dancers endured in order to lead a life contributing to the dance world, we can now get down to the nitty gritty of what exactly they contributed life after defection. Rudolf Nureyev, who is easily contemplated by many to be the first male example of modern ballet. Besides Nureyev inflicting a grand amount of masculinity to the stage, he was the Darwin of modern dance who destroyed the concept of men who were hidden in the shade by being used as merely props for the women to shine on stage. He was the very first male dance to conduct and write his own solo piece in 1963 when performing Swan Lake and another in Lev Isanov’s second act.

It can safely be said that Nureyev built a way for other artists, like Baryshnikov, to shine like the brightest stars on the dancing stage. If we were to compare contributions to the dancing world, Nureyev would be the one who constructed the stage and Baryshnikov the advertiser. His performance of The Nutcrakcer is the most watch version on televison thus far to the point of being the only one being nominated for an Emmy Award.

The DVD of this performance is also one of the best-selling items during the Christimas season further inciting the American population for the love of dance. Aside from that, he has also starred in movies that are also about the ballet dance world. For instance, he acted in The Turning Point which the film and himself received many Oscar nominations. Baryshnikov was also in White Nights choreographed by famous dancer Twyla Tharp where he is showing even more of his seeminly non-human flexibilty, exciting dance skills, and passionate acting.

Through all these works, Baryshnikov made the Ballet something that was so unknown to the American public and shaped it into something enjoyable. Moreover, Baryshnikov’s latest contribution to dance is the Baryshnikov Arts Centre in New York City. The Centre is dedicated to encouraging the creative arts and providing a creative home for rising artists, musicians, and dancers. In conclusion, there was so much more I wanted to write about these two dancers with such history and controversy in their lives. For instance, I was planning to include Baryshnikov having children out of wedlock and his opposition to marriage.

There is also Nureyev to add who had an affair with Pushkin’s wife and later on ended confessing to being homosexual. I was going to get more detailed into these accounts but decided that they were incredibly menial and irrelevant to their talent and contributions. Although they did suffer in Russia, it was those experiences that propelled them to be who they are.

Their sufferings were healed by dance. Their personal lives after Russia, although much less stressful, did not create them.—did not make them into better dancers. Martin Luther King, Jr. once said, “As my sufferings mounted I soon realized that there were two ways in which I could respond to my situation — either to react with bitterness or seek to transform the suffering into a creative force. I decided to follow the latter course” just like Nureyev and Baryshnikov did.

Compare Nureyev to Baryshnikov. (2016, May 12). Retrieved from https://studymoose.com/compare-nureyev-to-baryshnikov-essay 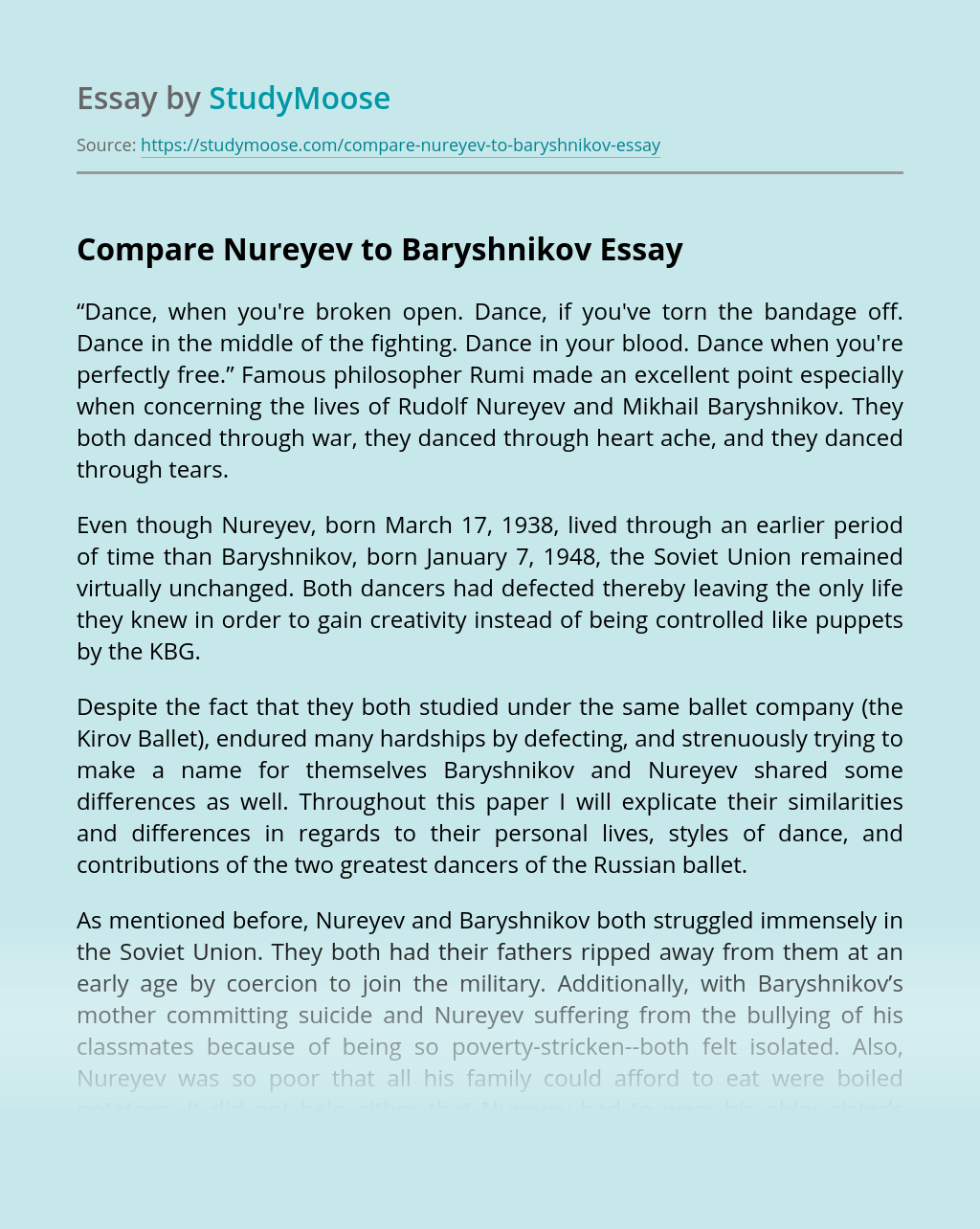 The history of ballet began in the Italian Renaissance courts of the fifteenth and sixteenth centuries[citation needed]. It quickly spread to the French court of Catherine de’ Medici where it was further developed. The creation of classical ballet as it is known today occurred under Louis XIV, who in his youth was an avid dancer...

Compare and Contrast of Classical Ballet and Modern Dance

Dance is one of the most beautiful, expressive forms of art known to mankind. It expresses joy, love, sorrow, anger, and the list truly goes on for all the possible emotions that it can convey. Dance not only can express how one feels, but it can tell a story or even be used to praise...

Get Essay
Compare Nureyev to Baryshnikov

Le Ballet Comique de la Reine is considered to be the first ballet by most dance historians. This ballet took place in Paris, France in 1581. This special ballet was produced by Catherine d`Medici, and Balthazar de Beaujoyeaulx was responsible for the choreography. The dancers in this weren’t professionals by any means, just simply members...