Compare and Contrast Hrm and Ir

There are various conceptions existing in the aspects of definition, academic boundaries and major functions of the fields of human resource management (HRM) and industrial relations (IR). The essay critically discusses the comparison and contrast on the key features of Human Resource Management and Industrial Relations in academic fields. On the base of review of the origins and transition of the tow subjects the paper will explore the general accepted definitions of the HRM and IR respectively. It will then go on to lay out theoretical dimensions of the two subjects, and looks at significant characteristics of HRM and IR.

Don't use plagiarized sources. Get your custom essay on
“ Compare and Contrast Hrm and Ir ”
Get custom paper
NEW! smart matching with writer

The last part assesses comparison and contrast between the two fields in the light of historical perspectives and literature review.

The HRM terminology stems from the USA subsequences of human relations movement. In the counterpart, since the first British book on HRM published in the late 1980s, which was notably known as New Perspectives on Human Resource Management (Storey 1989), there have been a large volume of published studies investigating the definition of HRM in diverse standing and approaches.

Ackers (2003) provided a general term on the definition of HRM, ‘HRM refers to all those activities associated with the management of work and people in firms and in other formal orgaisations. Although it is conceptualised by involving the entire breadth of HRM studies, it should be embodied to specific nature and pattern of the subject.

Sisson (1990) sees HRM of four aspects of employment practice: an integration of HR policies with business planning; a shift in responsibility for HR issues form personnel specialists to line managers; a shift from the collectivism of management and, finally, an emphasis on commitment has further understanding of HRM.

According to the classic work edited by Storey J (2007), HRM is defined as a distinctive approach to employment management which seeks to achieve competitive advantage through the strategic deployment of a highly committed and capable workforce, using an integrated array of culture, structural and personnel techniques, which is a comprehensive understanding of HRM.

There is little doubt that Industrial Relations has become a subject of scholarly analysis since the end of the nineteenth century, when Sidney and Beatrice Webb (1984) couple published their classic series studies of the regulation of employment in Britain. Flanders (1965, 10) suggested, ‘The study of industrial relations may therefore be described as a study of the institutions of job regulation’, which prevailed for a time is beyond satisfaction of the academic study at present. The view that IR is the study of processes of control over work relations, and among these processes, those involving collective worker organization and action are of particular concern is more adaptable to generalise specific and precisely for the subject. (Hyman, 1975)

In 1990, the launch of two influential journals, Human Resource Management Journal, edited by Keith Sisson at Warwick University, the International Journal of Human Resource Management, edited by Michael Poole at Cardiff facilitates the emergence of courses and models in HRM in universities and colleges. A large and growing body of literature has sprung up amongst which two notable theories is predominant leading, Fombrun et al’s (1984) matching model and the Harvard framework. Matching model focused on the connection between organizational strategy and HRM, in the meanwhile Frombrun et al divided HRM into four integral parts – selection, development, appraisal and reward stressing the significance of efficiency of work performance enhancement. Some commentators have even utilized the terms ‘high commitment’ policies to substitute for HRM (Marchington, 2005).

On the other hand, the Harvard framework (Beer et al, 1985) involve six basic components with a broader expand from the inside out , that is, situational factors, stakeholder interests, policy choices, outcomes, long-term consequences and a feedback loop. However, neither of the models pays close attention to the respects of employment relationship. John Storey’s (2007) model is worth considering framework in HRM studies. Four key elements are summarized as foundational structure of HRM, that is Beliefs and assumptions, strategic qualities, critical role of managers and key levers which activate HRM as an essentially tool and techniques for use by practitioners. However, many HR functions these days struggle to get beyond the roles of administration and employee champion, and are seen as reactive rather than strategically proactive partners for the top management. In addition, HR organisations also have difficulty in proving how their activities and processes add value to the company. Only in recent years have HR scholars and professionals focused on developing models that can measure the value added by HR.

Colling et al (2010) comment that Academic industrial relations is now outdated’ either the problem of the ‘human factor’ in work have all been solved, or they are better addressed by new approaches such as ‘human resource management’ or ‘organisational behaviour’, however, in the statement by the British Universities Industrial Relations Association (BUIRA), they strongly disagree the claim. During the initiative academic research in IR, predominant focus upon collective institutions and processes which embody trade unions, collective bargaining and strikes are the mainstream scope of IR study. Compared with the origin IR, modern IR emphasized on the experience of work, both individual and collective, and with all sources of the rules that govern the employment relationship.

Therefore, IR was widely regarded as having two major subdivisions within it. The first dealt with the management of labour, the second with collective bargaining and methods of workforce governance (Russell Sage Foundation, 1919). By many accounts, industrial relations today is in crisis. In academia, its traditional positions are threatened on one side by the dominance of mainstream economics and organizational behavior, and on the other by postmodernism. The importance of work, however, is stronger than ever, and the lessons of industrial relations remain vital.

Comparison and contrast of Human Resource Management and Industrial Relations The interrelation between HRM and IR is complicated. In one sense HRM was considered as a subfield of IR in the early 1960s for majority of scholars, afterwards in prevailing contemporary conception HRM has largely been regarded as a separate subject underlying distinguish perspectives and divergent points of the field. However, HRM and IR do share some commonalities in matters of concern focusing on employment and workplace issues and recognition of the humanness of labour. Moreover, it is common to combine the two academic fields as one integral course named HRM and IR in contemporary university and college teaching. By contrast, John Storey (2007) proposes twenty-five dimensions to differentiate HRM and IR with the same key element in Storey’s model (Table 1.1).

Furthermore, from the research interest differentials, it can be concluded that HRM largely takes an ‘internal’ perspective on employment problem emphasizing the solution to labour issues, while IR basically has an external view focusing on the workers’ and community’s solutions. The goal and function is not the same between the two fields. HRM’s primary goal is organizational effectiveness and takes a instrumental approach to promoting employee interests; IR’ aim is a combination of organizational effectiveness and employee well-being as well as employee’s interests priorities. HR assumes conflict not inevitable and can be minimized by management; IR sees conflicts as inevitable requiring third-party intervention. HRM and IR are distinguished in various respects with different standpoints and approaches.

Generally, IR provides a multi-layer discernment of employment relationships, interconnections between the workplace, the company, the sector, the national regulatory framework in the light of multi-disciplinary approach involving sociology, political science, economics, history and law. Frequently, HRM teaching accepts management’s objectives uncritically, concentrates on activities at company level without exploring the societal and institutional environment, and has its disciplinary basis primarily in psychology and organizational sociology rather than the social sciences more broadly. Despite of the inevitable irreconcilable antagonisms between the two subjects, there is a closely link of HR and IR providing a complementary foundation of the exchange and development of the employment issues.

The essay discusses the definition of HRM and IR and significant features in academic fields largely through an historical analysis of the two fields’ respective origins and development. HRM and IR fields are distinguished by numerous differences in their approach to research and practice. However, scholar on both sides have to give greater recognition to the fact that the different assumptions separating HRM and IR are only specialized tools for investigation and do not represent a full or universalistic explanatory model for studying the employment relationship for more explicitly research perspectives.

Compare and Contrast Hrm and Ir. (2016, Jun 07). Retrieved from http://studymoose.com/compare-and-contrast-hrm-and-ir-essay 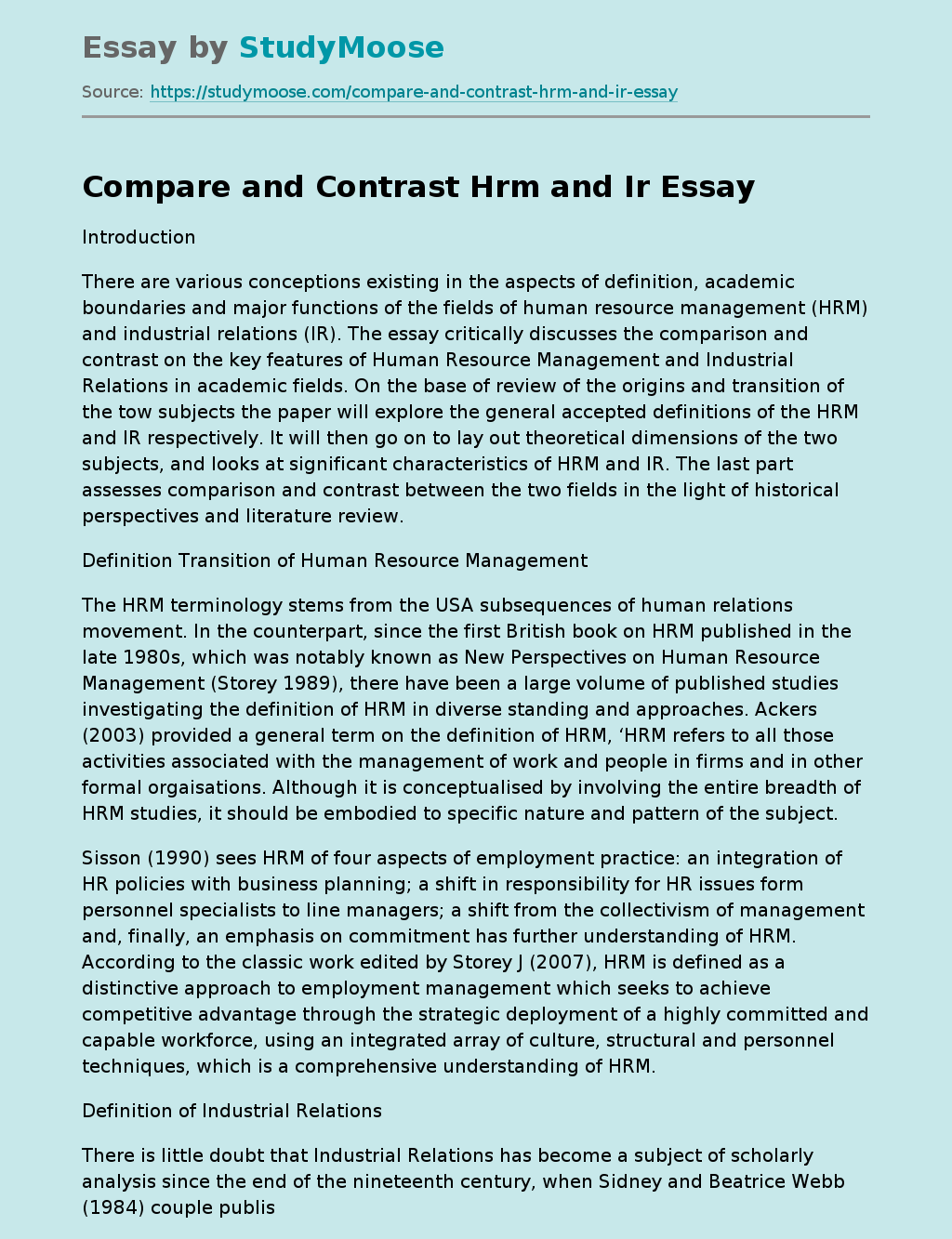