In the 1400s explorers came across the Atlantic from Europe in search of a new world. Many nations found the New World and set out to look for gold, some found hoards and others did not have the same luck. Two nations that set out for gold were Spain and England, who both set up the colonies Mexico and Jamestown. Each had their own different social and economic groups, and each colony was very different yet in some ways similar. Mexico and Jamestown colonies both had social hierarchy systems, which defined class and power although; they were very different in their organization.

Don't use plagiarized sources. Get your custom essay on
“ Compare and Contrast the Social and Economic Groupings of One Latin American and One North American Colony in the 18th Century ”
Get custom paper
NEW! smart matching with writer

Also Mexico and Jamestown both had underlying religious motives for colonization. Slavery was a prevalent use of a work force for both of the colonies although in neither case did they call it slavery. Both the Mexico and Jamestown colonies in the 18th century were in some ways similar and in some ways very different. The two colonies were similar because they both had some sort of class structure.

However, the organization of their class structures was very different. Jamestown did not even have an organized system; a lifestyle based on the rich ruling over the poor eventually fell into place on its own accord.

This caused an unintentional major separation of the rich plantation owners and the poor indentured servants.

Mexico, however, had a thought out caste system, which held was in place for hundreds of years. It consisted of four levels of power, ranging from people holding all the power to people having absolutely none. At the top of the social pyramid, were the Peninsulares, the richest most powerful of all the levels. The Peninsulares were the smallest portion of the population, which had complete and pure Spanish ancestry and were born in Spain, were aristocrats who were put into positions of power directly by the crown and held power for their whole lives. Read also about three colonial regions compare contrast

Their children who had complete and pure Spanish ancestry but were born in the Americas were made to be Creoles, who did not hold any power and had a rivalry with the Peninsulares. They would get angry with the Peninsulares because they would restrict them from power and from all government offices. The next level down was the Mestizos who were of both Spanish and indigenous decent, they were not allowed to have any power and they were forced to work. Below the Mestizos, and the bottom of the whole social order were the indigenous. They were given citizenship and then taxed, therefore, forced to work as slaves. Read about lifestyle of the poor and rich

Although the British colony and the Spanish colony both had class systems they were organized differently. While both left for the Americas initially to find gold, both had an underlying religious motive. Religion was very important to all the colonists and they would do many things in the name of their religion. The Spanish set up a system where if the indigenous accepted the Spanish faith then they could be citizens. There mindset was that if the indigenous were not baptized then they were going to eternal damnation, so giving the opportunity for them to be baptized was actually saving their souls.

Jamestown religion was their life. Some left their homeland of England so that they could escape the persecutions of their religion. When they arrived in the New World some set up very organized and very religious communities were they could live and worship in peace. Unlike the Spanish, the British did not care for the indigenous and they thought of them as savages and should be exterminated. This is because when Jamestown had tried to colonize Ireland, they tried to convert all of the natives and the found it was harder than it was worth.

The Oxford English Dictionary definition of slavery, “a person who is the legal property of another and is forced to obey them. ” This fits the description of indentured servants who would sign a contract that would say that they had to work for a certain amount of time and then they would be freed leaving them jobless, homeless, landless and almost moneyless.

This could be described as slavery because the indentured servants had to obey the employer because they were in a legal contract. The Mexican colony used the encomienda system, which is “the right to exact tribute and labor from the natives on large tracts of land” (Brinkley 12).

Basically, it is a system so that natives and Mestizos become slaves to Peninsulares and Creoles. They were forced to work so that they can pay their taxes that they have to pay for becoming a citizen. Both the Mexican and Jamestown colony used slavery just did not use that terminology for it.

In many ways the Spanish colony in Mexico could be compared and contrasted to the British colony in Jamestown. They were completely different in how they were organized. Both were colonies that created an unimaginable impact to this world and continue to everyday. Some though could reject my thesis. Some could say that the Mexico and Jamestown colonies were not similar. They could say that the Mexico and New England colonies are more parallel because both interacted with the native people and tried to convert them to their faith.

Compare and Contrast the Social and Economic Groupings of One Latin American and One North American Colony in the 18th Century. (2020, Jun 01). Retrieved from https://studymoose.com/compare-contrast-social-economic-groupings-one-latin-american-one-north-american-colony-18th-century-new-essay 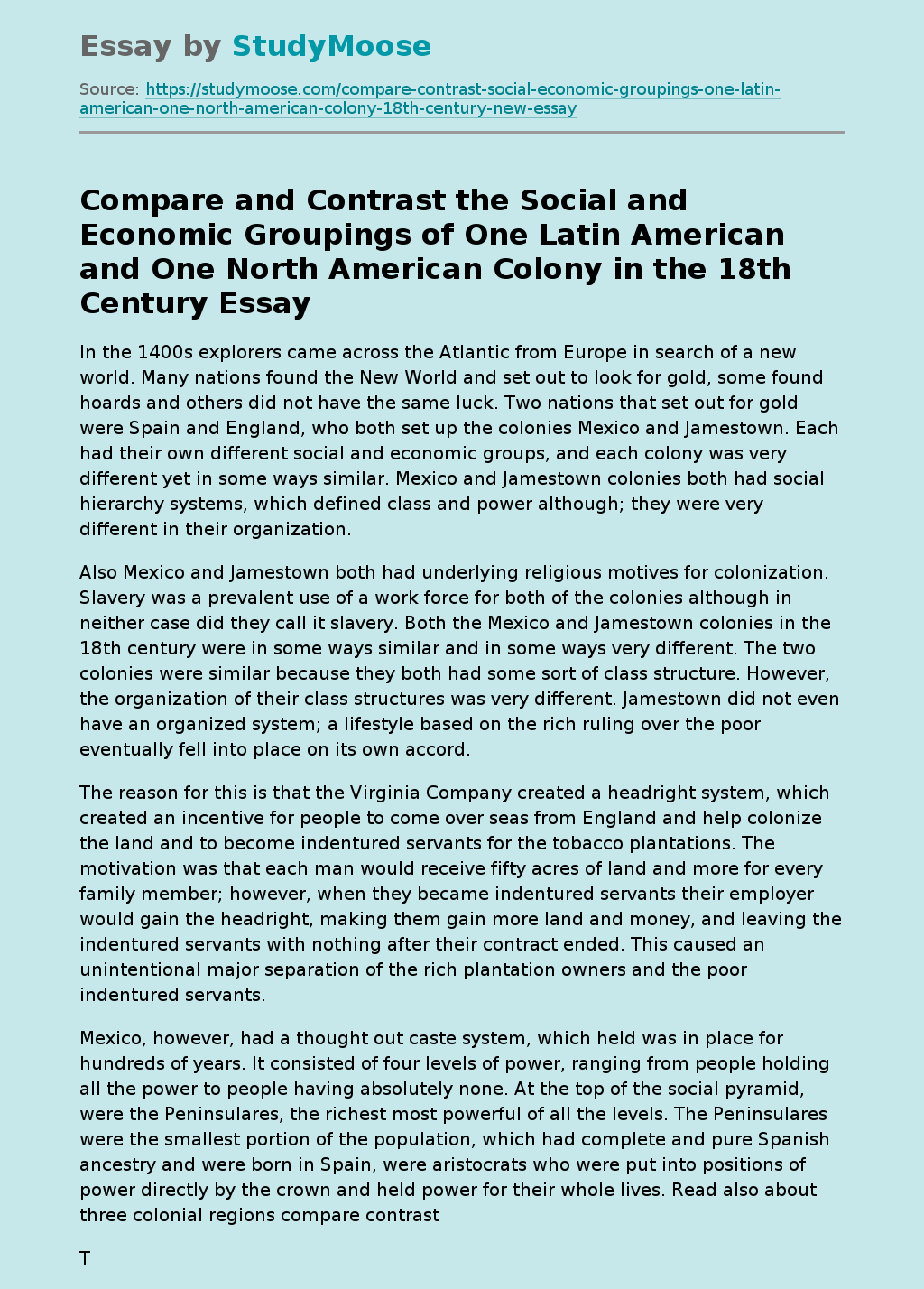