From 600 BCE to 600 CE, known as the classical period, Greece and Han China began to develop. These empires were extremely important and successful. However, despite their success, Classical Greece and Han China had major similarities and differences in their political, technological and economic/environmental views. These societies were similar in the fact that they emphasized certain buildings being built, such as urban centers, or universities. Both built systems to make certain aspects of life easier as well. The Greeks built aqueducts and the Chinese built a system of roads within their society.

Turn in your highest-quality paper
Get a qualified writer to help you with
“ Compare and Contrast Classical Greece and Han China ”
Get high-quality paper
NEW! AI matching with writer

They were both also similar in the fact that both civilizations experienced population growth during the classical period, which led to expansion. Although they had multiple similarities, these societies had their differences as well.

Politically, Greece was not unified they were divided into separate city-states, where as China was unified. Technologically, The Greeks focused more on building up their army and staying strong, while the Chinese worked on products that could improve their everyday lives, and had less to do with the protection of their civilization.

Also, they differed economically/environmentally. Greece’s main items of trading were grapes and wine, China’s main export was silk. Although they had many similarities, Classical Greece and China’s differences outweighed these similarities.

Politically, these societies had major differences. Greece was not unified, and was separated into separate city-states. Each city-state was called a Polis. Each Polis included an urban center and its rural territory, an acropolis, agora, public buildings/establishments and fortified walls.

Each Polis was also unique and different because they developed independently. Things in each Polis such as traditions, economies,religions and political systems were different. A different person was the “ruler” of each Polis. Polis’s also had a different, distinct form of government as well.

In Han China, they were not divided! China was unified by Shi Huang Di. Since the empire was unified, they were able to focus on bigger and more important political advancements. The entire empire followed Confucian philosophy, which believed that deep down, humans were capable of doing good deeds. They had a standardized currency for trade, which made it easier for trading to take place. The empire even had a Civil Service system which was non-existent in Greece.

The Civil Service system was put in charge of duties that regulated the society and kept it in balance. They also conducted the Civil Service Exams, which a citizen could take in order to move up in society. This was China’s form of social mobility. However, these civilizations had slight similarities. Both societies stressed the importance of having certain buildings constructed, such as urban centers and universities. These buildings were highly important for these civilizations because they helped the societies carry out the values that were important to them. Urban centers offered a place to meet, while universities were a site where one could go to become more knowledgeable.

Technologically, these civilizations were also different. The technologies that they were able to develop or that were important to them was based primarily on their location geographically. In Classical Greece, they focused on building up a strong military base to fend off the surrounding civilizations of Egypt, Persia (Turkey) and Rome. They did this by developing their technologies in things such as ship building, training skilled sailors, and developing their navy for trading and fighting. However in Han China, they were far less concerned about their military/army base because they only had to worry about their nomadic neighbors! They had time to develop technologies such as the cross-bow, the first seismograph (the tool that is used for predicting earthquakes), they built A LOT of roads, specialized in paper making, and they also popularized silk.

The popularization of silk was very important because it was the main product that China used for trade! The Chinese even made their paper out of wood bark, which is partly how we make our’s in today’s society! This shows how technologically advanced Han China really was. Despite these immense differences, Classical Greece and Han China had a few similarities. Both societies built certain systems that made life easier for their society.

In Classical Greece, they built aqueducts, which were brick water pipes. These pipes were used to transport water throughout the society. In Han China, a system of roads was built. These roads made it easier to transport goods for trade, and had other uses as well. Although the actual technologies may have been different, the one goal that they shared was similar- to make life easier!

From the economic/environmental point of view, Greece and Han China had some major differences. Geographically, Greece was a peninsula. They had access to many natural harbors, and Han China did not, along the Silk Road of Han China, people often died of thirst. Greece was also wasn’t far from societies such as Egypt, Persia and Rome. Being so close allowed for cultural diffusion to be present in Greece. Classical Greece’s major trade products were grapes and wine. They often traded these to get the goods that they needed. Greece even had events such as the Olympic Games.

The Olympics even brought the divided city-states together for a brief time, despite rivalries they might have had! In Han China, their society was based on agriculture. However, in Greece, the land wasn’t fertile enough to farm. This was a major difference since agriculture was such an important part to China’s society! Another big difference between the two was the Silk Road. It was China’s source of trade, and they often traded their main export, silk on the Silk Road. Despite all of the products the Silk Road gave China, such as horses (China’s most desired product), it also came with a down side.

Many diseases were spread on the Silk Road from Europe! This resulted in diseases coming back to Han China, they didn’t just stay on the Silk Road! Despite their major differences economically/environmentally, there were some similarities. One of these similarities was that both civilizations experienced population growth, which led to expansion. The Han period in China was mostly a period of population growth, expansion, and migration! This was the same for Greece. These societies were doing so well in terms of trade, and being able to support the population and become more advanced led to this population growth!

It is a great achievement that these civilizations were able to last so long despite all of the hardships they were faced with such as disease and invasions. Yet, they were so advanced for their time that they seemed untouchable! Greece and Han China were mostly different despite their civilizations lasting so long and being so successful.

Their ways politically, technologically, and economically/environmentally worked for whatever problems that they were exposed to where they lived, which is what made them prosper. Their views also shaped the legacy that they would leave on the world! Especially in terms of things that we use today such as road systems and paper making! These advancements are the things that are so important, and still have us learning about Classical Greece and Han China today!

Compare and Contrast Classical Greece and Han China. (2016, May 04). Retrieved from https://studymoose.com/compare-and-contrast-classical-greece-and-han-china-essay 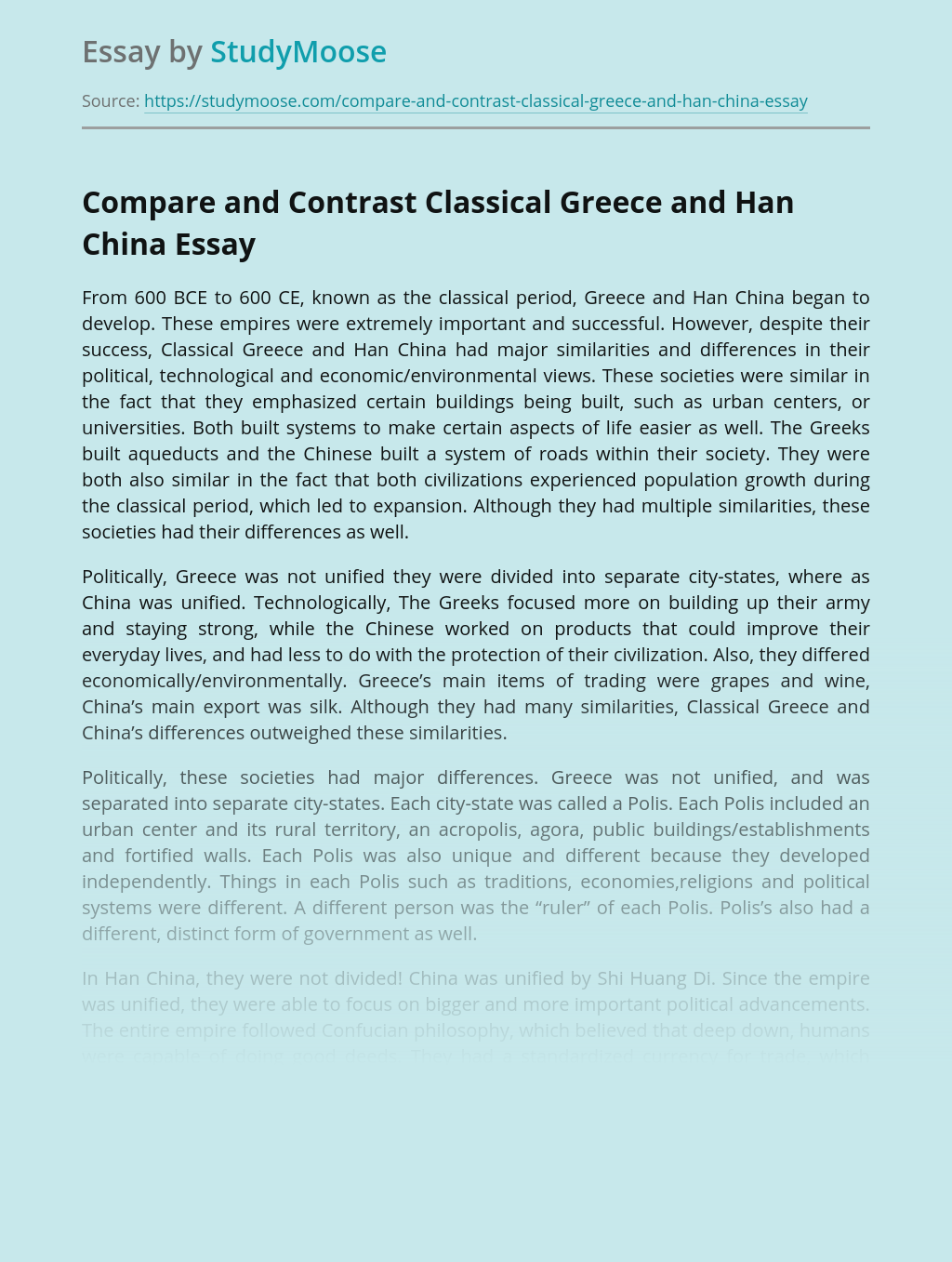 Turn in your highest-quality paper
Get a qualified writer to help you with
“ Compare and Contrast Classical Greece and Han China ”
Get high-quality paper
Helping students since 2015
Stay Safe, Stay Original