A superhero is an imaginary character who is noted for feats of courage and nobility, who typically has a vibrant name and outfit, a proficiency of pertinent skills, innovative devices and/or amazing powers and abilities beyond those of typical people. More notably, a superhero has a strong moral code, including a desire to risk his own security in the service of good without expectation of benefit. Although superhero powers differ commonly, the posession of superhuman strength, the capability to fly, and improvements of the senses are all common.

Turn in your highest-quality paper
Get a qualified writer to help you with
“ Comparative Paper: Beowulf and Batman ”
Get high-quality paper
NEW! AI matching with writer

These abovementioned characteristics of a superhero are obvious in Beowulf, the primary character in “the longest enduring poem in Old English”, which is also entitled Beowulf, by an unidentified author (Online Recommendation Book for Medieval Research Studies, 2006). Beowulf revealed indications of being a superhero in what Wikipedia has actually cited as his three primary fights:

These adventures of Beuwolf are somehow being resurrected in today’s superheroes such as Batman, although both represent an entirely different literary traditions. The former is a 10th century Anglo-Saxon epic poem with a touch of Christianity while the latter is a product of what is called as popular culture – movies, shows or comics that usually has a mass appeal. The classic hero possesses strength, ethics; and, above all, fights evil.

This model applied in the time of Beowulf still applies today, only slightly modified. As a result of such innovations as television and fashion magazines, society has come to value physical attractiveness and sexual prowess, as evident in the example of Batman. In addition, humility has become a desired quality in modern times, whereas self-confidence to the point of arrogance was a favorable attribute in the time of Beowulf.

Despite the differences, similarities between the Anglo-Saxon hero and modern day hero can be seen through the comparison of Beowulf and Batman. Beowulf and Batman both possess the heroic quality of strength. We have seen Beowulf’s feat in the three battles described above.  Batman, on the other hand, single-handedly fights gangs of criminals on numerous occasions in the movie “Batman,” showing not only muscular strength, but endurance, much like that of Beowulf. Batman echoes the heroic strength of Beowulf.

Another heroic quality shared by Batman and Beowulf is their commitment to fighting evil. When a villain attacks innocent citizens, the hero is there to protect them and fight the attacker.  This is where the fighting of Good versus evil becomes the next major component to the stories of Beowulf and Batman. The Anglo-Saxons were religious people and had a strong belief in God. The hero must kill the villain “face to face” and never stab it in the back. These heroes represent the Good; they are usually honest, clean, upright respectable people – an archetype for what a model citizen should be. Both the stories tell a tale of Good fighting against Evil and then dying for the people. Both Batman and Beowulf wear this heroic responsibility to fight evil well.

However, as opposed to Batman, Beowulf, whose main asset was his amazing hand strength, not much mention was made of his wily good looks or his incredible intelligence (Rollins, 2006). As Christianity spread throughout Europe, feudal cultures told stories that combined their warrior ethos with Christ’s example of personal sacrifice. Despite developing a global culture theoretically no longer quite as dependent on national conquest, the Western world still tends to envision our savior hero as “someone who kicks butt” (think of Neo in The Matrix) (Wandtke, 2005).

Alongside this pervasive trend, however, an interesting countercurrent developed in the Renaissance and has reached its peak in recent years. This countercurrent suggests the hero who rights the wrongs of the world with force might actually be destructive to general cultural development (as one culture’s hero will often be another culture’s villain). Do our warrior heroes provide us with examples of the heights we can reach as Christians? Or do they operate with moral principles that work in opposition to the teachings of Jesus?

Even though the roles have changed for the heroes throughout time their importance to the countries has not gotten smaller. These heroes’ jobs are also as equally important as the ones of Beowulf’s day because they play a large role in our society. Television, radio stations and comic books are a form of entertainment that allows people to be introduced to heroes and escape their problems and lives, and pretend that these heroes would transport them into a world solely their own, a world where the good triumphs over evil – even for a moment. For as long as there are harsh realities, there is always a room for make-believe. 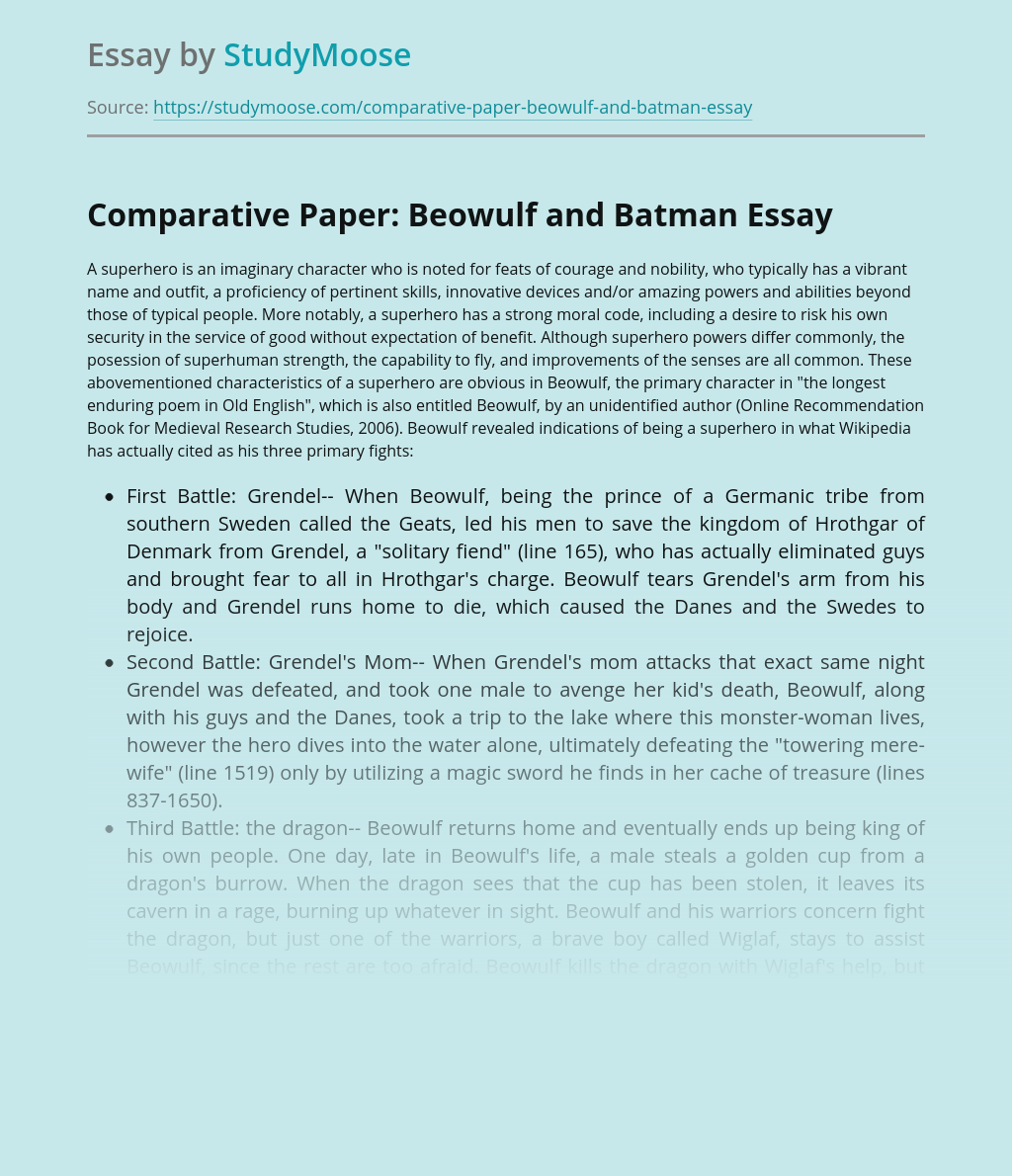 Turn in your highest-quality paper
Get a qualified writer to help you with
“ Comparative Paper: Beowulf and Batman ”
Get high-quality paper
Helping students since 2015
Stay Safe, Stay Original