Batman vs Superman: Who Is Better

The difference between superheroes can be colossal or microscopic. From their facial masks, outfits, super powers, and super names themselves they are similar yet different in similar ways. Batman became a superhero after his parent’s death affected him boldly. He learned he could fight evil with his gadgets and with his fists. Superman on the other hand, escaped from the planet Krypton which had been pronounced doomed. Unlike Batman’s realistic powers, Superman’s powers are supernatural with his super strength, super-speed, invulnerability, super hearing, and flight.

Don't use plagiarized sources. Get your custom essay on
“ Batman vs Superman: Who Is Better ”
Get custom paper
NEW! smart matching with writer

The only similarities in Batman and Superman’s costumes are that they both wear capes and tights. Batman’s skin tight black and grey costume aluminates his muscular frame and protects his life by being made of bullet proof and fire-resistant fabric. Whereas Superman’s costume also shows off his strength; his costume is red, blue and yellow. Batman’s chest parades a large bat symbol, however, Superman’s chest exhibits a large S.

Superman wears nothing on his face to shield his identity. Nonetheless, Batman wears a mask similar to a bats shape.

Batman is a master of 127 different martial arts, has amazing human strength, was trained as a ninja assassin, and is a master of disguise. His weapons consist of his customized boomerang, or as he calls them his “Batarangs,” grapple guns, mini-mines, explosive packets, gas capsules, and many more (KillerMovies.com). Batman does not have super powers, but he has the will to fight and win every fight he is thrown into (Batman: Profile Page).

Superman’s powers are super natural, with his super hearing, vision, speed, and breath he is almost unstoppable. His hearing is so powerful he can block out any sound just so he can zone in on one within the city. His powers include heat vision and microscopic vision and his speed makes him capable of flying. His iconic breath can help him stay under water for almost an hour and ever freeze targets. He has superhuman speed as well (Superman Profile).

As many good comics, there is always a love interest. For Batman, they gave him plenty. Some of his well known love interests where Vicki Vale, Kathy Kane, who was the first Batwoman, Silver St. Cloud, and Selina Kyle who was known as Catwoman. Superman’s main love interest and top known girlfriend was Lois Lane a news reporter for the Daily Planet in Smallville where they lived.

Batman vs Superman: Who Is Better. (2017, Feb 11). Retrieved from http://studymoose.com/batman-vs-superman-who-is-better-essay 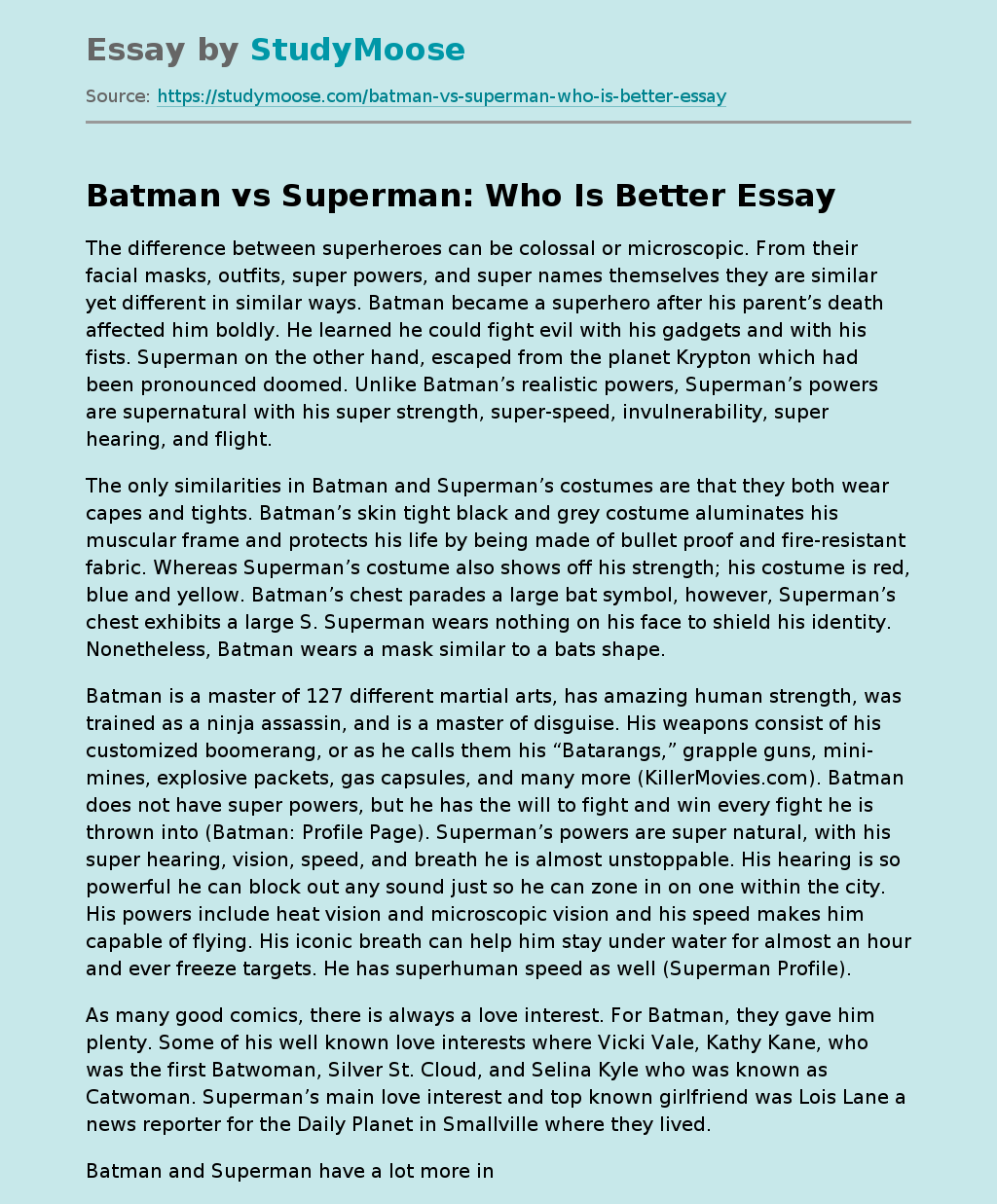