Who Would Make A Better Partner: Batman or Spiderman?

There are many different heroes out there. Children and adults seem to be obsessed with superheroes. Even though there are so many different superheroes out there, two of the most popular are Batman and Spiderman. These two individuals have been classified as hero classics for a long time. They both have their own movies, cartoons, comics, and TV shows. Batman and Spiderman both share the same goal – protect humanity from crime and evils of the world. Even though they have something in common, they also have many differences.

Don't use plagiarized sources. Get your custom essay on
“ Who Would Make A Better Partner: Batman or Spiderman? ”
Get custom paper
NEW! smart matching with writer

But aside of their superhero nature, they’re also ordinary human beings that have the ability to love, aspire or make moral choices. This essay will compare these two individuals, and answer the question: who would make a better life partner out of these two superheroes?

First of all, Spiderman and Batman came from two different worlds. Peter Parker before becoming Spiderman was an orphan who lived in Queens, New York with uncle Ben Parker and Aunt May Parker.

He was an extremely intelligent college student, but also a shy boy who could not overcome shyness to approach the girl of his dreams – Mary Jane Watson. Peter Parker fell in love with Mary Jane, and never had any other true love experiences with anyone else as an ordinary Peter, or Spiderman. Batman, on the other hand, came from a more fortunate family in terms of finances. Bruce Wayne originated from a wealthy family. When he is not fighting the crime, or solving mysteries, Batman becomes the billionaire playboy.

Bruce Wayne earned his reputation as a ladies man. Wherever he is, he is always seen with an attractive woman on his arm, and is rarely ever seen with the same lady twice. Moreover, Batman is also known for his various affairs with Catwoman, Wonderwoman, Talia Ra’s al Ghul, Vicky Vale, and many others. Even though Spiderman also had affairs with Black Cat, he always stood true to the love of his life.

Secondly, both superheroes share a very similar story – both have lost members of their families. When Bruce Wayne was an 8-year-old boy, his parents were brutally murdered and robbed right in front of him. After this tragic event, young Wayne swore on his parents spirits that he will devote his entire life on warring on all criminals. This shows that Batman is consumed by the death of his parents, and that will always come before everything else, including his love interest. In contrast, uncle of Peter Parker was shot to death. After avenging death of his loved one, Spiderman realized wisdom coming from his uncle, which was that great power comes with great responsibility. He accepted the death of his uncle and he was never blinded by it anymore. Parker was fighting crime from duty, rather than from blind thirst for vengeance. That being said, Spiderman seems to be more open-minded, and even though he has his responsibilities as superhero, he will always care for his loved ones, and will always find time for his partner.

Thirdly, Batman is known for his inability to trust anyone, and that he is obsessed with controlling everyone. Batman could not trust Dick Grayson, the boy he raised, and it is assumed that he will not trust his love partner. Moreover, he doesn’t care about the privacy of others as long as they are safe. Spying on others should not be accepted under any terms in a healthy relationship. In contrast, Spiderman never tried to control anyone he loved. He has always tried to separate his superhero nature from his ordinary self – Peter Parker. This individual trusts his loved ones, and trust is something that relationships require from both people.

As these three arguments demonstrate, Batman seem to have sociopathic behaviors which would make any relationship toxic. Bruce Wayne and Batman are solitaries who would never form a healthy relationship. On the other hand, Spiderman seem to be a mature man, despite his young age, who knows how relationships should be formed. He knows his weaknesses and is never afraid to ask for help. In addition to that, he comforts and gives advice to those around him – Aunt May Parker, Mary Jane Watson, or even Norman Osborn, a villain that wanted to kill Spiderman. All in all, these arguments show that Spiderman would be a better partner over Batman.

Who Would Make A Better Partner: Batman or Spiderman?. (2020, Sep 18). Retrieved from https://studymoose.com/who-would-make-a-better-partner-batman-or-spiderman-essay 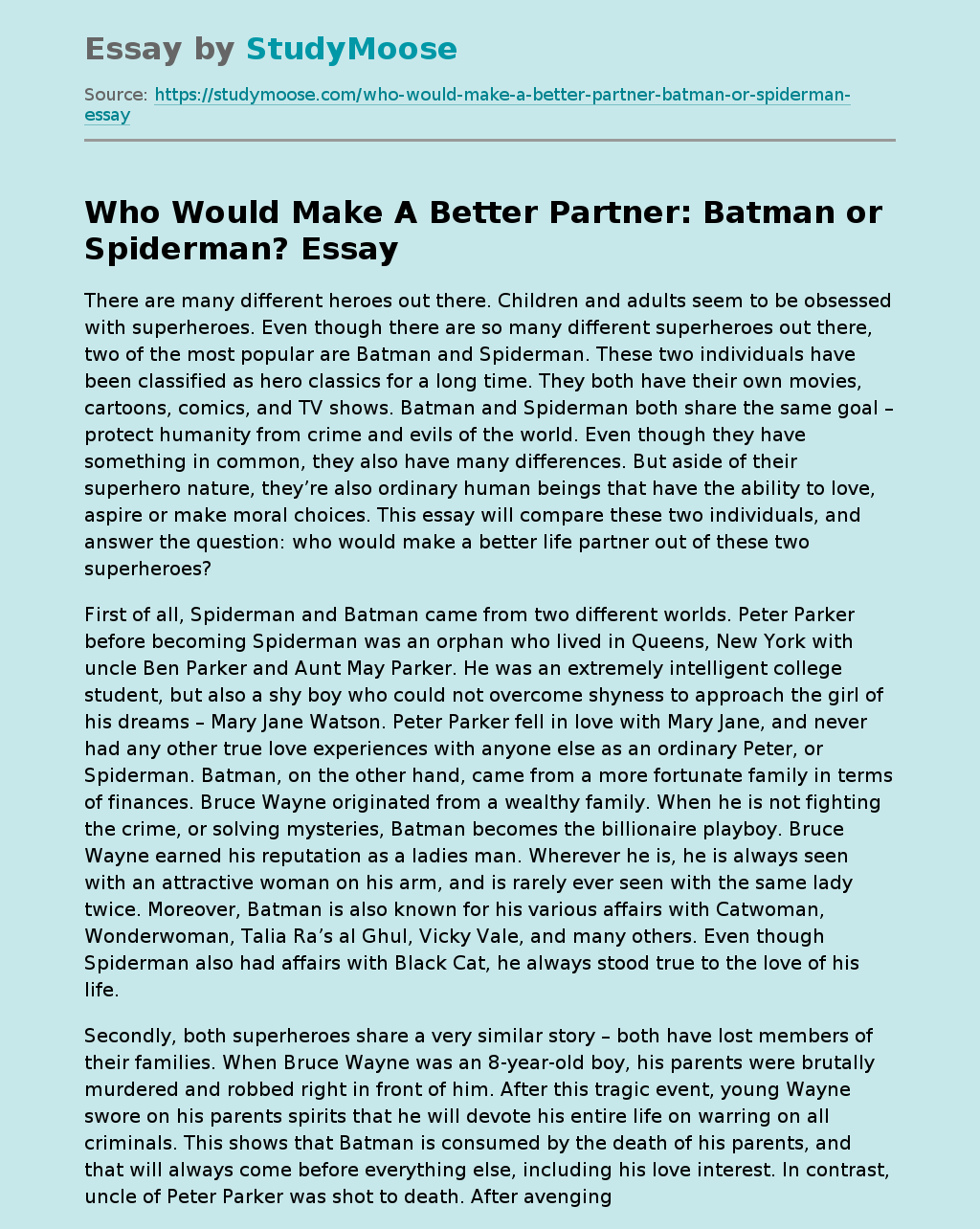