However, when women leaders are putting glorious greatly, they need to sacrifice their parts of life to earn such a success. Mostly, they need to work overnight and hard like their male fellows, they are single or divorced, and they may need to take care of both of their career and children. Actually, female leaders are facing some practical problems in their emotion, career and family. Many females are suffering in balancing these factors. Do women make better leader than men? Or specifically, are women playing a better role in managers? What are issues women leaders facing?

In order to solve these problems and leave no doubt, I write this essay to analyze this topic.

2. 1 Leadership According to the professional definition, “leadership is the process of influencing an organized group toward accomplishing its goals. ”(Roach & Behling, 1984) There are certain basic qualities or characteristics that most people associate with leadership, such as self-confidence, persistent, integrity, ambitious and determination. People would agree that who own these qualities can be labeled as “leaders”.

However, it is usually hard to recognize a proper leader with a standard measurement.

Human traits are quantized immeasurable. In daily works, a good leader is normally judged by people he or she leads. Unfortunately, these opinions are always subjective and biased. Work performances may consider being comparable. However, in reality, only similar works can provide comparable performance results which limit the number of comparable cases. Insufficient parameters cannot provide a reliable analysis. Due to these difficulties, this essay will compare female and male leaders in other factors which are not specialized and quantized for leaders but also providing references for good leaders.

These factors include effectiveness, intelligence and attitude which compare leaders in the aspects of performances; psychical and psychological; values and reliability, respectively. Before comparison and analyzing, it is more reasonable to realize the current situation about gender and leadership which will also give readers a general idea. 2. 2 Men are still the major force in leaders Actually, majority of world still consider that domination of power is in man’s hand, though women leaders are increasing rapidly recent years.

As statistics show, woman account for 51 percent of population and 46. 5 percent of labor force while their numbers in manage level are negligible. In fact, in more powerful positions, women only account for 7. 3 percent of Fortune 500 corporate line officers; only 4. 1 percent of top earners are women. (Catalyst, 2001) The true situation is like what Oakley ,J. G. said,” The overall percentage of women on corporate boards surpassed the 10% milestone for the first time in 1996, however, 105 out of the 500 companies surveyed still had no women on their boards. ”(Oakley, 2000; Dobrsynski, 1996)

In making such a males’ world, social and environment factors play critical roles. Traditionally, women are told to be less competitive and ambitious when they are still girls, when they start their careers, mostly, environment and themselves keep suggesting them to be more unleader-like and docile. This attitude is formed in a long period and by surrounding environment, and it actually becomes part of female’s character. Attitude toward leadership is stronger predictor of leader emergence than masculinity. (Kolb, 1999) This theory is even more reasonable when biology theory is abandoned.

Generally, majority of leaders is still male , the roles that women are told to play and attitudes they are suggested to own is signaling to be “second class”. 2. 3 Woman leaders show great potential It is undoubtedly men are traditionally leaders in the society; nevertheless, women are catching up in an amazing speed. Especially in recent years, woman leaders are showing their great power. In a long period before, people believe that women lack of managerial skills and they define it as “female deficiencies” as a reason why few women have made it to the top. Steven, Lynda and Joanne, 2003) However, many professors have proved the irrationality of this stereotypical concept, Davidson and Burke (Davidson&Burke,1994) have contended that almost all the evidence shows little or few difference in the traits and abilities of managerial skills among women and men. Furthermore, Ferrario(Ferrario,1994), Carless(Carless,1998) and Komives (Komives,1991) have studied and proved that gender does not determine who should get the leadership.

According to above statements, it is easy to realize that gender is not physical or psychical obstacle for female leaders. Moreover, Kent and Moss suggested the possession of feminine characteristics does not decrease an individual’s chances of emerging as a leader as long as the individual also possesses masculine characteristics. If women are more likely to be androgynous, they may have better chance of rising to leadership status. (Kent and Moss, 1994) Kent and Moss’ words can be explained related to women’s own characteristic.

Normally, women are more approachable and modest. The advantage is obvious above; male leaders cannot combine female’s good personalities which will be considered to be sissy while females will treat androgynous as a merit which show their potential. So, in some kinds of careers which require managers to be more mild and communicative, such as teachers and nurses, woman leaders are more preferred. To sum up, women’s characteristic advantage is seen as particularly important in light of the trends toward flatter organizations, team-based management and increased globalization. Oakley,2000; Adler,1993;Rosener,1995) Undoubtedly, woman leaders have predominance in some specific works than man leaders 2. 4 Gender and the leadership 2. 4. 1 Intelligence comparison Intelligence is defined by Cronbach as a person’s all-around effectiveness in activities directed by thinking. (Cronbach, 1984) Intelligence can divide in two parts, academic intelligence and emotional intelligence. In the aspect of academic intelligence, it is well accepted that there is no difference in academic intelligence between men and women. Furthermore, people with high academic intelligence don’t mean they are good leaders.

Obviously, traditional view about intelligence is quite narrow. Current research has denied the theory of IQ as the only measure of intelligence. In 1920 Thorndike hypothesized that true intelligence was composed of not only an academic component, but also emotional and social components. (Barbara& Shilpa, 2003) Bar-on argued that emotional and social intelligences were better predictors of success in life. (Bar-on, 1997) According to Barbara& Shilpa’s statistic analysis, the mean transformational leadership score of females and males are roughly the same (65. 21 and 63. 31 respectively).

To sum up, there is no specific gender difference in academic intelligence. Females have a higher score in emotional intelligence and males have an equally emotional leadership score with females. 2. 4. 2 Attitude comparison Attitude means a general and enduring positive or negative feeling about some person, object or issue. (Kalliath, 2010) Normally, we divide attitude in two parts, one is the affective component, and the other one is the behavioral component. Actually, leadership is affected by attitudes in the sense that a leader’s attitude about their subordinates is dictated by theories X and Y.

Theory X in the simplicity means leaders view their subordinates as pessimistic. They believe that the best way to treat subordinates is by manipulating for they think subordinates are lazy and unmotivated. Theory Y thinks oppositely, leaders of theory Y feel that most people are motivated and afraid of punishment. (Kalliath, 2010) Normally, leaders with a positive self-concept and a Theory X philosophy tend to be bossy, pushy and impatient; they also generally take on a dictatorial leadership. Leaders with a negative self-concept and a Theory Y philosophy may seem afraid to make decisions and self-blaming. Hughes, Ginnett& Curphy, 1993) Related to above apart, women’s attitude is an obstacle for their leadership. This disadvantage is caused by environmental and cultural factors. All stereotyping views towards woman will affect them when they are becoming leaders. However, according to theory X and Y, they generally talk about two types of leaders. It can be seen that gender is not the major factor in attitude. To sum up, woman leaders are normally have more problems in their attitude and valuation than their man opponents. 2. 4. 4 Effectiveness comparison Effectiveness is understood in terms of leaders’ facilitation of a group or rganization’s ability to meet its goals. (Hunt, 1991; Mumford, 1986) It is stated that there is no difference in effectiveness, although some situations favor women and others favor men. (Powell, 1993)However, some people point out that female leaders may be less effective when they are doing stereotypically masculine jobs. It is easy to understand that women may violate conventions concerning appropriate female behavior. Female leaders will be subjected prejudiced reactions, which included biased performance evaluations and negative preconceptions about future performance.

Consistent with research on self-fulfilling prophecies (Geis, 1993), negative opinion towards women’s leadership can diminish their performance. Even though, some professors argue that role conflict for female leaders might also be minimized by adopting a relatively feminine leadership style that would meet people’s traditional expectations about female behavior. (Eaglly, Makhijiani, Klonsky, 1992) They assert that it is unfair to value the effectiveness in leadership roles that are rarely occupied by women and in which most of their evaluators are male. (Eaglly, Makhijiani, Klonsky, 1995)

In order to analyze this issue, two perspectives are introduced: alternative perspective and contingency theory based perspective. As a matter of fact, alternative perspective also have two parts, the first one is a structure view suggests that men and women are equally effective in leadership. (House, 1991&Hunt, 1991) Another alternative view takes into account the different selection of men and woman for leadership. Besides gender equality opinion, it also points out that women may be superior performers, especially in the longer run as they may erode negative thinking about their work. Craig &Jacobs, 1985) The second perspective is of contingency theories of leadership, suggests that leaders’ effectiveness depends on their style of leading. (Bass, 1990) It focuses more in the aspect of leadership style. It insists that effectiveness of different gender is related to corresponding factors in leadership methods, not gender. In a word, although male leaders are considered more effective in traditional masculine jobs, female leaders are more effective than males in less masculine terms. Effectiveness is a reliable proof of the woman leadership is not worse than man leadership.

Although some people still believe woman leaders are using some inefficient management methods when they are most in masculine works. It can be expected that females will fare at least as well as men in an increasing range of leadership and managerial roles. 3. Conclusion From the days of old to the modern world, people who have the opinion that men are born to lead and women should serve as followers are out of date. No one can deny the gender equality in the current society. Leaders are no longer the exclusive privilege for men, but also for excellent females.

We start to realize the importance of analyzing this topic and have taken a close look at some of the most basic qualities needed in a successful leader, such as attitude, intelligence and effectiveness. While some qualities seem to be more present in males than females, such as attitude, there are still many females owning the necessary characteristics to be better leaders, such as effectiveness in feminization jobs. This essay collects studies that analyzed leadership under rigorous researches and we have also taken a close look at some of the more recent studies on this topic. 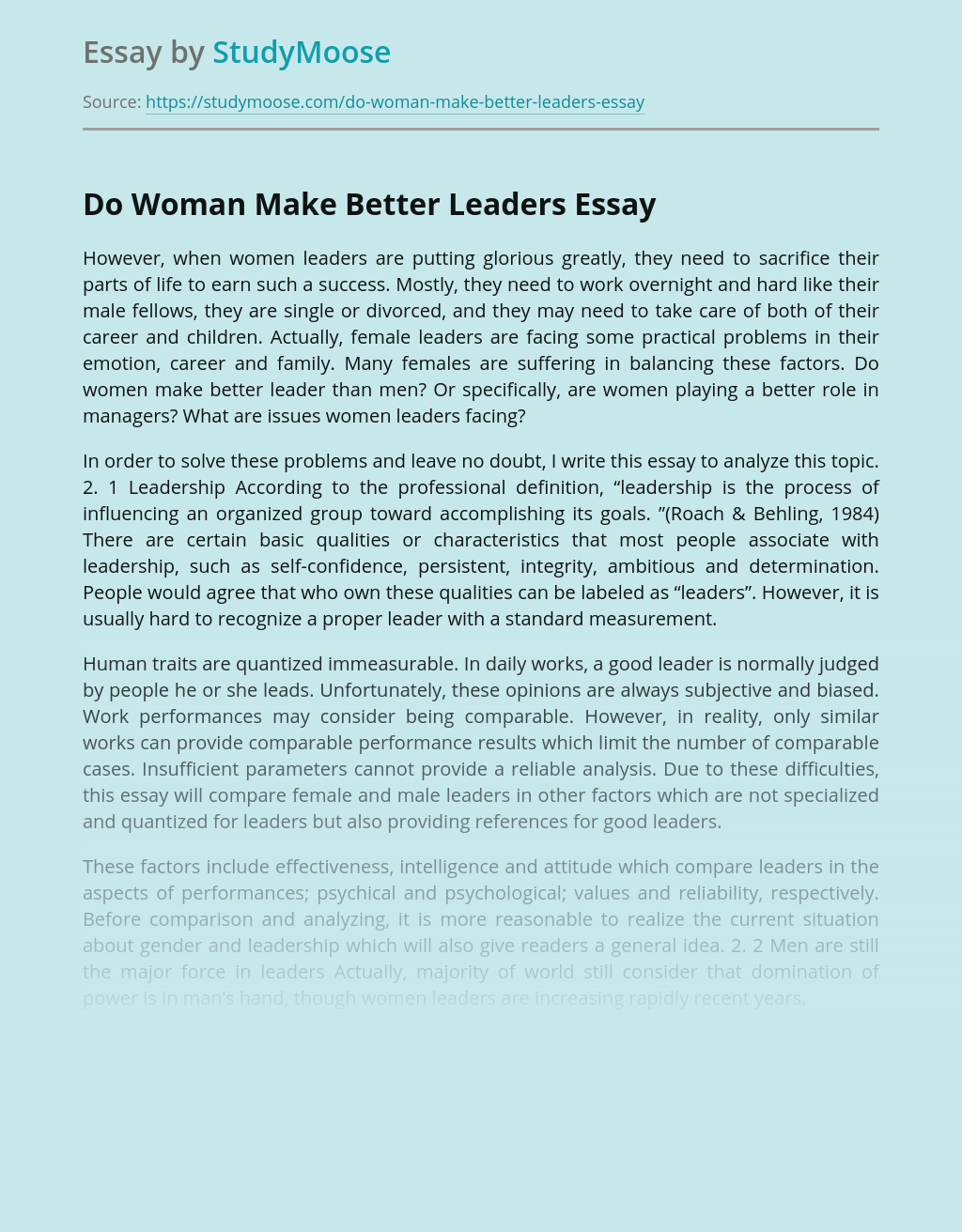