Coco Chanel’s influence in the fashion industry began over a century ago during the 1920’s. Chanel embraced the essence of the “Roaring Twenties” which was all about becoming “someone” and separating yourself from the old and beginning a new life. Chanel focused on the newly found needs and desires of women and designed her fashion around what women had wanted. Not only did Coco Chanel pave the way for modern fashion, she also created innovative ideas using fabrics that were traditionally used for menswear.

Don't use plagiarized sources. Get your custom essay on
“ Coco Chanel’s Influence on the Apparel Industry ”
Get custom paper
NEW! smart matching with writer

These fabrics were incredibly durable which allowed Chanel to construct new designs with less fabric than what would have been traditionally used. One of the major fabrics that Chanel included in her lines again and again was wool jersey. This fabric is comfortable and easy fitting, but at that time, had not been considered suitable for fashionable clothing. This was an incredible influence that Chanel had in the fashion industry because she showed the world that wool jersey’s can be used in fashionable clothing.

Coco Chanel also had created a modern spin on embroidery for women’s clothing. Instead of using more fabric, such as lace, Chanel decided to decorate the clothing using beading and embroidery. Coco Chanel also frequently accessorized her clothing with multiple strands of pearls, quilted handbags, sling-back ivory pumps with black toes and of course, her combination of jewels with sportswear. All of these accessories are still used to accentuate Chanel’s clothing present day and have also set Coco Chanel’s clothing apart from the rest from the very start.

Chanel also changed the way women’s clothing looked on women. Prior to the innovation of Coco Chanel, a women’s body was split into two halves—upper and lower. Chanel modified this and found continuity and symmetry throughout the entire torso. Chanel is also known for “letting go of the waistline” and created the style which we currently see in fashion. This in itself shows how Coco Chanel has changed the fashion industry forever. Chanel created the “flapper look”, which we all think of when we think of the Roaring Twenties. The “flapper look” was defined by its masculine influence, which incredibly popular throughout the 1920’s.

Coco Chanel became an icon in the 1920’s, and every woman wanted to be just like her. Coco Chanel became very slender and long, which caused all of her clients to lose weight. This is how the “boyish frame” of women’s bodies became popular in the 1920’s. Coco Chanel also cut off all of her long hair to create a classic bob. This caused Coco Chanel to look even more boyish. All of her clients soon adopted the hairstyle themselves, which caused Chanel to also have been responsible for the popularity of the bobbed haircut of the 1920’s. Because Chanel paved the way in the physical appearance of women throughout the Roaring Twenties, Coco Chanel designed her dresses to be fitted for slimness and length, included with a dropped waistline.

Chanel’s biggest influence in the fashion industry is how she drastically changed the length of skirts worn by women in the early 1920’s. Shortly after the introduction of shorter skirts, Chanel developed the ever so popular “little black dress”. This became an essential garment for every woman to own, in the past, and present day. The development and introduction of the little black dress into society had the most powerful impact than any other garment ever introduced. This gave women a go-to outfit for all times, whether it was for work, a dinner, or a more casual look.

The Chanel style hasn’t changed since the designer began designing clothing. Currently, the Chanel style still holds the traditional and classic “French chic” with a menswear feel through texture and fabric. The innovative ideas of the late Coco Chanel has paved the way not only through modern fashion, but has also created what we now consider a “classic” look. This can be seen as true because the Chanel look is the perfect go-to and will never go out of style. The classic Chanel style has been in style for over 100 years, which shows how influential the designer was.

Chanel’s style are still relevant today with women all over the world purchasing the “little black dress” and tweed suits, which Chanel made famous. Chanel impacted the apparel industry in the most powerful way possible—she defined the classic look, which will never go out of style. This shows how Coco Chanel has not only influenced the world of fashion, but that she is one of the most influential people in the fashion industry. It has been well over a century since her introduction in the fashion industry, and her name still lives on—stronger than ever. 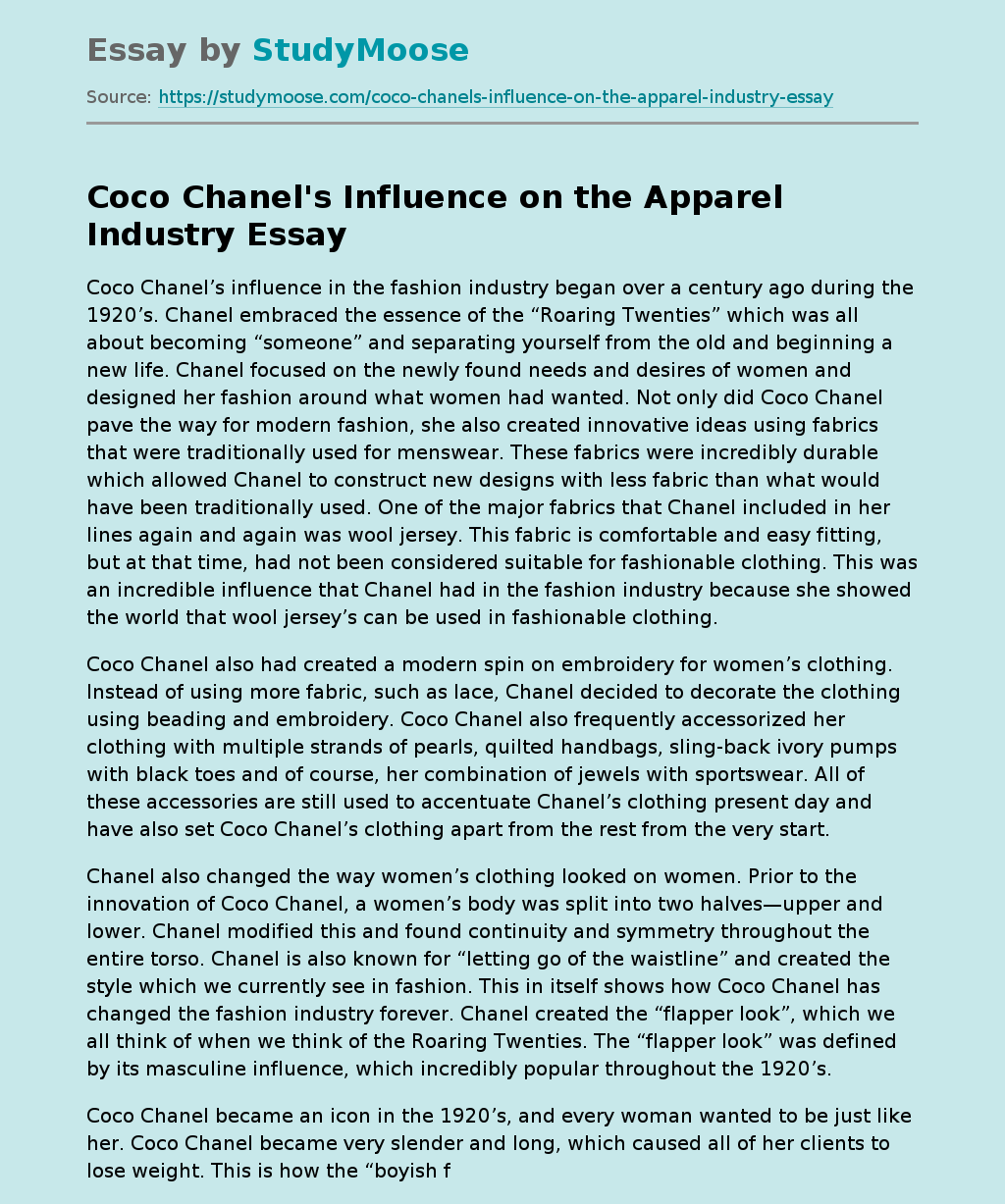